High-Def Digest was able to take a look at RLJE Films' new creature feature The Barge People, directed by Charlie Steeds. The Video, Audio, and Bonus Features section has not been analyzed since they're not pertinent - however - if/when a Blu-ray is released we'll update this review accordingly. It's not a particularly good movie, but it's B-Movie tropes and willingness to go the extra mile with blood and guts will satisfy gorehounds. Worth-A-Look!

Having a terrifying experience in the middle of an ocean, off the coast of Amity Island with a giant great white shark, or in the middle of New York City with a 500-foot tall monster is nothing new to the horror genre where civilians are brutally attacked and killed by these sinister blood feasting monsters. The Barge People change it up and take that element to the quiet British countryside down the serene and beautiful canals where a group of killer fish people stalk and kill a few humans on vacation. It's not a particularly good movie, but it's B-Movie tropes and willingness to go the extra mile with blood and guts will satisfy gorehounds.

Director and producer Charlie Steeds along with writer Christopher Lombard are no doubt huge fans of the horror genre, which shows in The Barge People where a ton of throwbacks and winks to their favorite genre films are showcased in numerous scenes, whether it be a similar line of dialogue, camera shot, or story point that evokes those memories of previous films that inspired this filmmaking duo. It's just too bad that the film is a tad bit too ambitious with a couple of side plots that run it off its already great path of a few people being stalked and killed in a small boat in the middle of nowhere.

The Barge People centers on two romantically inclined couples from the big city who rent a barge on vacation to sail it up the peaceful canals in the English countryside for a nice relaxing getaway. Of course, the get way more than what they bargained for when they hit up some of t he small villages along the way. Sooner than later, a group of fish like mutants begin to attack the boat and everyone inside that culminates on land with no real happy outcome. One aspect that throws this film off the rails is the addition of two characters who are vicious rural criminals who are looking to wreak havoc on these two couples, but end up banding together when the monsters arrive, which makes no sense, given the severity of their crimes against these four people. 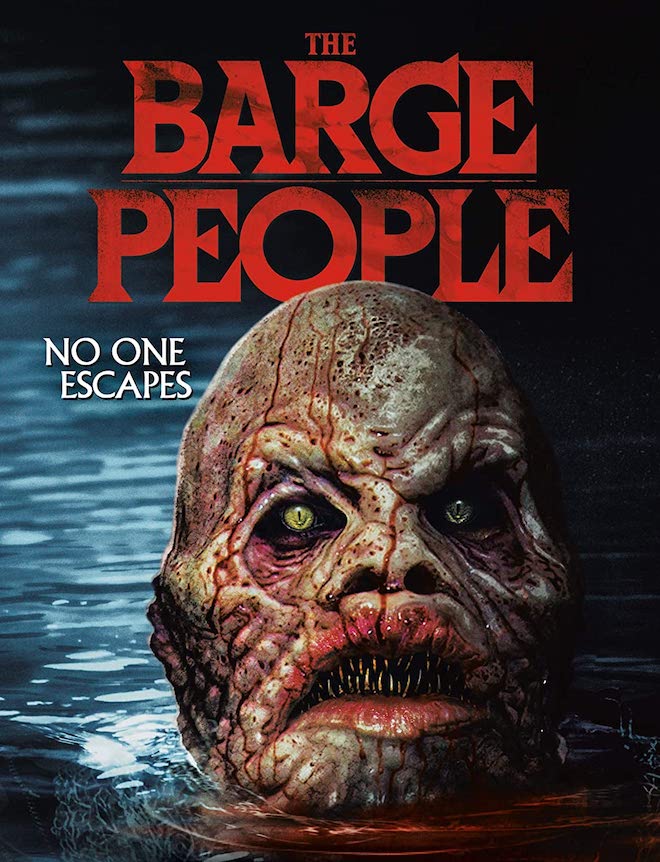 The creatures themselves are a mix of several different films and lore that can be best described as a sadistic family who could be related to the crazies in The Hills Have Eyes that look like a mix of the Mermen in Cabin in the Woods and the cave dwellers in The Descent. However, these Barge People wear clothes and carry giant sharp weapons like machetes and axes to hinder their prey before they start feasting on their victim's flesh and blood. These creatures even speak English as if there were a deleted scene that revealed a sexual encounter between a fish and a human, which is sorely missing in The Barge People. It's not really discussed where these creatures came from or how they became to be, but there is a not-so-twist at the end of the film of who's really in charge that can be seen coming from miles away.

The practical effects are top-notch for such a low budget flick with all of the gooey entrails and blood spurting constantly on the actors. The fish people themselves look quite good and most distinguishable if not a little funny as they each. try and kill the screaming humans, who seem to have no will to live or energy to fight. Performances are sub-par and over-the-top at times, but that's not really the spotlight of the movie, but rather the visual effects and gore and some wrecked semblance of a social message of don't mess with the rural folks of England with big-city ideas.

The Barge People has a good outline and set up for a different kind of horror movie that hasn't been done before, but it falls prey to itself by trying to add in too many unnecessary elements and characters where it could have been pitch-perfect set on a barge with four people trying to survive the night from bloodthirsty fish-man monsters wearing punk rock clothes. Worth-A-Look!