When dealing with the rotting corpses of the undead it's difficult to do anything fresh with the fleshy material. Jeff Barnaby's Blood Quantum takes a worthwhile stab casting the zombie apocalypse against the backdrop of an indigenous people's reserve in Canada as they're the only immune people. A good zombie movie offers up interesting social-political commentary and this one delivers - but it often struggles with tone, either being too dour to have any fun or being so gnarly it's hilarious without finding a middle ground. RLJE delivers the Blu-ray with a solid A/V presentation without any bonus features. As we move into the spooky season, this one is at least Worth A Look

Things were quiet on the Mi'kmaq reserve of Red Crow. Reserve police chief Traylor (Michael Greyeyes) has few worries with his duties. The biggest issue is dealing with his ex-wife Joss (Elle-Máijá Tailfeathers) and their troubled son Joseph (Forrest Goodluck) who routinely ends up in jail thanks to his pal Lysol (Kiowa Gordon). But when the dead - man and animal alike - rise from the grave, Traylor has a new problem on his hands. Mysteriously everyone from the tribe is inexplicably immune - regardless of being bitten - suddenly making their home a safe zone. As the plague worsens it won't be refugees or the rising hoard of the undead - but conflicts within the tribe taht could rip apart their safe haven.

Straight up - I dug Blood Quantum. It's pretty damn bonkers. While far from flawless, the film goes for broke with its concept and largely succeeds. I dug the setting of a reserve deep within the Canadian woods. I thought it was a nice touch that the indigenous people were the only ones immune and now having to be the saviors of humanity. I also loved the pace of the film where we're teased with some gutted fish coming back to life but then the film dreamily drifts back to what "normal" is for Michael Greyeyes' Traylor. Then when shit hits the fan it goes bad fast and he has to struggle to figure out what the hell is going on. 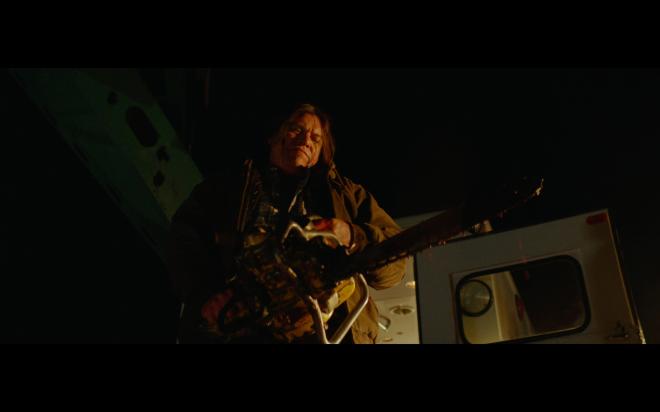 The film also has a rich and moody visual aesthetic. Cast in the deep woods, the film feels moist. The kind of cold wet air feeling you get from early mornings as a kid in summer camp - or my entire childhood growing up in the boonies of southeastern Michigan. Skies are gray and virtually every shot looks like it just rained allowing for ominous lighting and settings - particularly any fire-lit sequences. It's beautiful looking stuff with some clever photography to heighten the tension.

My principal issue with Blood Quantum is its tone; it's all over the map. The first act of the film is somber and meditative with an ominous dread seeping into the story. Then the zombies hit and it's a shocker of a zombie woman holding the corpse of a baby it presumably just moments before gave birth to. Then said zombie is dispatched with some intense bone-crushing gore swiftly followed up by another zombie getting a chainsaw through the back of the head that reminds one of early Peter Jackson material like Dead Alive or Bad Taste - and it's hilarious! I love the zombie kills for how over the top and humorous it all is. And the film kinda feels like it's going to be more funny than it started out because the situation is so ridiculous it leans into the humor naturally. Then it gets damn ominous and pretty damn depressing. While not cohesive, scenes and sequences are well put together, it's not like the final outcome is out of expectation, but I can see some folks struggling with it. You're laughing one second and then a zombie woman is devouring an essential piece of someone's anatomy where you then ask "wait, should I be laughing?"

All in all, I dug it. Blood Quantum gets more right than most zombie flicks that come down the independent horror pipeline. For starters, you actually give a damn and enjoy the characters! You want these people to survive. When Traylor and his crew go into a warehouse to save some folks and decapitate some "Zeds" it's a tense sequence that gives you a couple of subtle laughs to let off the gas a little. The cast is great, Michael Greyeyes turns in a fun Traylor - a man constantly at wits end about what to do. Elle-Máijá Tailfeathers is terrific as Joss, but there are times where it feels like there was more with her character that didn't make it to the final edit. And throughout - the whole cast gets a unique way to take out some "Zeds" and look like they're having some fun with it too. Qualms about tone aside, this was a fun jaunt into the Zombie genre that would be worth another visit should the filmmakers feel motivated to do so.

Shudder's Blood Quantum arrives on Blu-ray courtesy of RLJE Entertainment in a single disc release. Pressed on a Region A locked BD-25 disc, the disc is housed in a sturdy snapper case. The disc loads to trailers for other Shudder releases before arriving at an animated main menu with traditional navigation options.

Aside from slight compression issues that creep in occasionally with a little banding and crunchy edges, the cast majority of the image for Blood Quantum is spot on. As I mentioned in the review, the film has a fall-like seasonal drab quality to it. This is a movie that likes its deep reds and browns with only a few dips into blues and yellows so primaries don't get a lot of time to play. Blood is nice and grotesque and depending on the living status of the individual doing the bleeding, it can take on a different shade accordingly. Details are pretty solid all around. There are some moments of softness and several sequences with only fire or candles to light the scene causing some fine detail loss, but otherwise, 90% of the movie offers clean clear facial and clothing details. Later when the town is blocked off by shipping containers there's some great production design at work to see. However - and I'm guessing this is camera limitations as I can't locate tech data otherwise, there is some intermittent crunchiness to the image where lines lose their hard edges and the image as a whole loses some clarity - these are largely wide establishing shots but a few close-quarters sequences are a little off. Small gripes really, but worth mentioning.

Blood Quantum gets a lot of squishy life out of its DTS-HD MA 5.1 mix. Part English, part Mi'kmaq with English subs, dialogue is clean and clear throughout. Scoring maintains an ominous sense of dread often giving a little extra rumble and LFE to the more intense moments. Action beats pick up the full surround nature with gusto - the chaos of the final act is great stuff as are a few other early sequences. Imaging is well balanced throughout and levels are on point. There are a few long stretches where the story moves indoors and is quiet and conversational where the mix loses the presence of the sides and rears for a more up-front audio presence. This is a pretty subdued mix for a modern horror show and only really punches the gas when called for.

Sadly there aren't any bonus features to speak of here. I would have loved a commentary track or even a few quick EPK sound bites just to see how they pulled off the production design or some of the zombie kills. Sadly it's not here.

Blood Quantum tries to pack in a lot of meat into this 100-minute sausage. We get a story of familial obligation in conflict with societal duties. We have plenty of political commentary oozing throughout the film on top of an inconsistent tone; is it funny, shocking, somber - all of the above? While some elements don't quite come together, enough of the movie works to make it worth the time. RLJE Entertainment delivers a technically solid Blu-ray releases with a strong transfer and a moody atmospheric audio mix. Sadly the lack of bonus features is a stinker. If you're looking for an interesting new entry in the over-stuffed Zombie genre - Blood Quantum is at the very least Worth A Look.