The Kiss Before the Mirror

Director James Whale may be best known for his horror movies, but all the artistry and intensity that distinguish such classics as Frankenstein and The Invisible Man help raise The Kiss Before the Mirror above other movies in its class. This provocative pre-Code thriller about the devastating consequences of infidelity makes some astute points about marriage and gender roles while spinning a seductive web of psychological suspense. Kino's brand new 2K remaster revitalizes the film, while solid audio and an engaging commentary track cap off a high-quality Blu-ray presentation. Recommended.

In between three iconic horror movies - Frankenstein, The Old Dark House, and The Invisible Man - James Whale directed a crackling good psychosexual drama called The Kiss Before the Mirror. This provocative pre-Code thriller virtually vanished from view after its initial 1933 release, but lucky for us, Kino Lorber has retrieved it from the vault and polished it up so we can fully appreciate another fascinating work from an innovative artist who never quite received his due during his far-too-brief Hollywood tenure.

Infidelity, jealousy, and murder grab the spotlight in this intriguing story that flaunts a distinctive European flair. Set in Vienna, the film opens with a vengeful husband (Paul Lukas) killing his brazenly unfaithful wife (Gloria Stuart) in cold blood as she undresses for a tryst at the home of her debonair lover (Walter Pidgeon). Respected lawyer Paul Held (Frank Morgan) signs on to defend the murderer, who's also a dear friend, but the more he learns about the behavior of the wife before the shooting, the more Paul begins to believe his own wife, Maria (Nancy Carroll), is having an affair as well.

Paul's hunch turns out to be correct, and his feelings of betrayal, disillusionment, anger, and resentment toward his wife fuel an intense desire to use any means necessary to help his friend escape conviction. The distraught and bitter Paul also hopes to punish Maria for her indiscretion, and decides murder might be the best and most efficient way to do so. 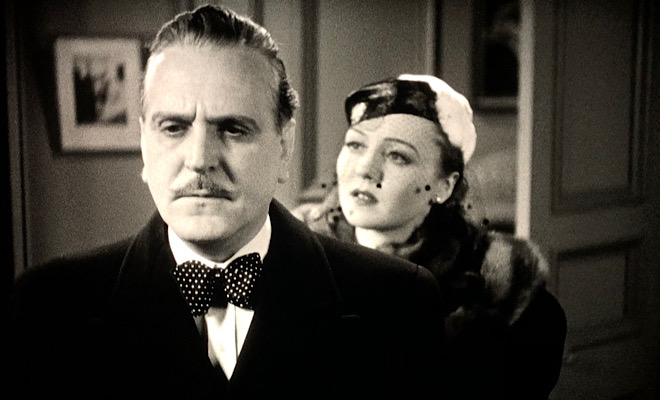 Though at times over-dramatic and far-fetched, The Kiss Before the Mirror examines marriage and gender roles with a keen eye. It also possesses a decided feminist slant that balances the blustery displays of testosterone and lays bare the pitfalls of an imperfect legal system. Some of the issues the film explores might seem arcane, but core elements still resonate to varying degrees. Thankfully, the constricting Hollywood Production Code hadn't yet fully kicked in, so The Kiss Before the Mirror can address its themes in a frank, adult manner that makes them more palatable today.

The screenplay by William Anthony McGuire (an Oscar nominee for The Great Ziegfeld) makes the case that men expect their wives to be dutiful, doting, ornamental, and submissive, and can't understand why they'd want to be anything else. Yet by sentencing the women they worship to such a stifling, unfulfilling life - perhaps because they can't overcome their own masculine insecurities - they unwittingly incite a desire for emancipation that drives their wives into the arms of other men who treat them, at least initially, as equals.

On the flip side, the women believe they can outfox their blissfully ignorant and stupidly arrogant men by playing their assigned role, earning their husbands' trust, and then cavalierly abusing it. They don't anticipate the retaliations that might stem from their reckless dalliances, because they don't believe their clueless husbands will ever find out about them. Violating marital vows might lead these unfaithful women to divorce court, but it shouldn't send them to the morgue. And though the men might claim to be victims who deserve to exact revenge, aren't their violent acts really just lame attempts to salve and bolster their bruised, fragile egos? 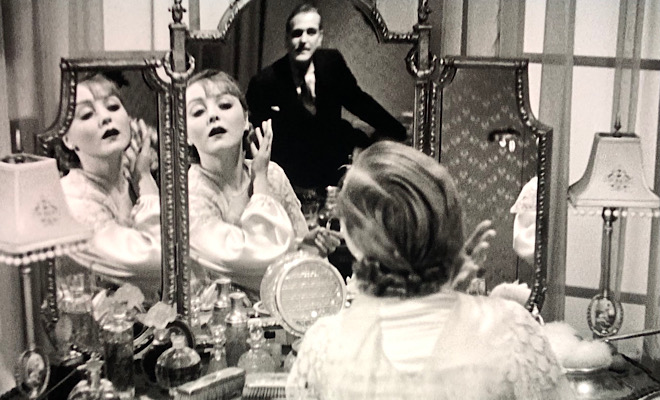 Whale elevates the tale and enhances the suspenseful mood by employing off-kilter camera angles, extreme close-ups, multiple mirror shots (you can't in good conscience call a movie The Kiss Before the Mirror without them), and expressionistic photography, all of which beautifully complement the tense exchanges between the characters. He even inserts his trademark 360-degree camera sweep during the courtroom sequence, a technical feat he debuted in Frankenstein. Without Whale's artistry, which keeps us transfixed even when the narrative falters, The Kiss Before the Mirror would be a far different and less notable motion picture.

A stellar cast helps, too. A number of recognizable names appear in roles that range from leads to bits. Morgan shows off his dramatic chops in a part that's far removed from his iconic turn as The Wizard of Oz, and it's a kick to see him act alongside another future Oz alum, Charley Grapewin, who would play Dorothy's sympathetic Uncle Henry six years later. (Grapewin portrays Morgan's alcoholic law associate here.) Carroll, who enjoyed a major screen career in the late 1920s and early 1930s, nabbing one of the first Best Actress Oscar nods for her work in 1930's The Devil's Holiday, files an intense performance as the beleaguered Maria, and Lukas, who would win a Best Actor Oscar a decade later for Watch on the Rhine (and often bears a striking resemblance to John Barrymore), makes an equally strong impression. In brief roles, a (fairly) young Pidgeon and glamorous Stuart (64 years before she would play the aged Rose in James Cameron's Titanic) produce some steamy chemistry during the opening sequence before Stuart's demise, and the always superb Jean Dixon shines as Morgan's arch, worldly-wise colleague.

Despite its many attributes, The Kiss Before the Mirror never quite scales the heights we hope for, but rediscovering this buried cinematic treasure is still a treat. Whale's work deserves its due, especially his films outside the horror realm, and the craftsmanship and ingenuity on display in this engrossing and efficient thriller inspire plenty of admiration for a director whose impact far surpasses the length of his criminally brief cinema career. 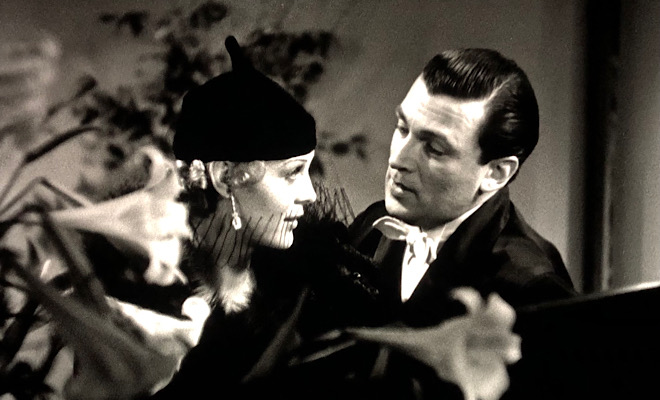 The Kiss Before the Mirror arrives on Blu-ray packaged in a standard case. Video codec is 1080p/AVC MPEG-4 and audio is DTS-HD Master Audio 2.0 mono. Once the disc is inserted into the player, the static menu with music immediately pops up; no previews or promos precede it.

A brand new 2K master yields a wonderfully crisp 1080p/AVC MPEG-4 transfer that faithfully renders Karl Freund's atmospheric cinematography and breathes new life into this long-neglected 88-year-old film. A healthy but not overwhelming amount of grain maintains the feel of celluloid, while rich blacks, vibrant whites, and a nicely varied gray scale combine to create a vivid, well-balanced picture. Excellent contrast and clarity contribute to the creepy mood - the dank prison cell scenes are especially well rendered - and sharp close-ups highlight fine facial features and costume textures well. An instance or two of jitter, a few specks, and a couple of faint vertical lines occasionally crop up, but that's not surprising considering the film's antique vintage. Such age-related imperfections only momentarily distract from what is otherwise an incredibly smooth and pleasing presentation that will certainly impress fans of Whale, pre-Code dramas, and the film's gallery of stars.

The DTS-HD Master Audio 2.0 mono track tries its best to overcome the limitations of early sound recording, and it succeeds to a fair degree. Some faint surface noise and a few pops and crackles can be heard from time to time, but none of the imperfections unduly intrude, and though a few bits of dialogue sound slightly muffled, most of the exchanges are clear and easy to comprehend. Sonic accents like gunshots and shattering glass supply some welcome oomph, and a wide dynamic scale handles all the highs and lows of the minimal scoring without any distortion.

In addition to a slew of trailers for other Kino releases (sadly, any preview for The Kiss Before the Mirror most likely no longer exists), the only supplement is a perceptive and engaging audio commentary by film historian Alexandra Heller-Nicholas, who specializes in gender politics. Heller-Nicholas talks about the moral decadence of society and constricting sexual roles that fuel the film's story and compares The Kiss Before the Mirror to its inferior 1938 remake Wives Under Suspicion, also directed by Whale. She also praises the work of cinematographer Karl Freund and explores the possible lesbian tendencies of Jean Dixon's character.

An intriguing pre-Code thriller about murder, jealousy, infidelity, and marital strife, The Kiss Before the Mirror features an array of fine performances and artistic direction by the always fascinating James Whale. The story may be far-fetched, but the underlying themes and impeccable style help us forgive any narrative pitfalls. A high-quality transfer struck from a new 2K master distinguishes Kino's Blu-ray presentation, which also includes solid audio and an engaging commentary track. The Kiss Before the Mirror may not rival Whale's far more famous Frankenstein and The Invisible Man, but deserves to be rediscovered by discerning classics fans. Recommended.