When 'Weeds' debuted on Showtime in 2005, it told the tale of a suburban housewife named Nancy (Mary Louise Parker) who was hurled into a financial crisis after her husband died. The debt dropped on her shoulders seemed insurmountable until she discovered the untapped market for marijuana in her community. Season one followed this newly single mother as she worked to keep her family afloat, hide her extracurricular activities from her best friend Celia (Elizabeth Perkins), and boost pot sales among clients like her city councilman Doug (Kevin Nealon). As she developed her business, she got help from her brother-in-law Andy (Justin Kirk), a supplier named Heylia (Tonye Patano), and Heylia's nephew Conrad (Romany Malco).

'Weeds: Season Two' picks up where we left off by focusing on the cliffhanger from season one -- it seems Nancy's boyfriend is a DEA agent. At the same time, Nancy attempts to begin growing her own product. Complicating matters are a series of twists and turns that leave their mark on every character: Nancy's two sons become more aware of her new job; one of her sons gets a girl pregnant; Andy may have to go overseas and join the war; Doug loses his councilman seat to Celia; and the town is converted into a "drug free zone".

As with season one, there are plenty of laughs to be had. While the series could have easily been made into a dramatic morality tale more akin to HBO's 'Big Love,' it instead finds humor amidst the horrors of secrets in suburbia. Kevin Nealon continues to steal every scene and is much more confident here than he ever was on "Saturday Night Live." Likewise, Elizabeth Perkins frazzles out of control and becomes one of the most amusingly bizarre villains ever seen on television. Best of all, Romany Malco really shines this season, once again showing off the talent he's brought to films like 'The 40 Year Old Virgin.'

But beyond just laughs, season two is a much darker affair as it begins to explore the dangerous corners of Nancy's suburb. Mary Louise Parker pushes her performance even further and proves herself once again as an actress to watch. The scripts up the ante too -- Nancy doesn't just fumble through her experiences like she did in the first season, she begins to start approaching her work more like a businesswoman. The resulting conflict forces her to choose between what's best for her family and what's safest for them. When she gets in over her head, she handles it believably and (to some extent) tragically.

Cashing in on the interesting setup of the show's first season, 'Weeds: Season Two' deftly develops its characters and moves the story in unexpected directions. The result is quite satisfying and never cheats its viewers with simple solutions or "wrapped-in-a-bow" sitcom-style. While I enjoyed season one, I became a true fan of the series with season two -- 'Weeds' continues to get progressively better as the tale unfolds, and I'm personally counting the days til the arrival of its third season this August. 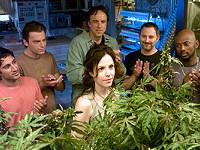 'Weeds: Season Two' is presented on Blu-ray in a 1080p/AVC MPEG-4 encode, and compared to the 'Season One' Blu-ray (which featured a MPEG-2 encode), the video quality here is noticeably improved.

Contrast levels are more solid, fine object details are sharper, and issues with source noise have all but been eliminated this time around. I doubt this step up in visual quality had much to do with the change in codec -- the second season of the show had a larger budget and a more comfortable production schedule which is more likely the reason for the upgrade.

As I first mentioned in my review of 'Weeds: Season One,' the set lighting is still problematic at times and leaves occasional shots looking a bit murkier than others. Likewise, there's still a slightly annoying haziness at times that bothered me more in this Blu-ray presentation than it did on DirecTV's HD broadcast, but again this appears to have been a creative decision, and not a flaw of the presentation. The color palette is also intentionally oversaturated, although the blacks are deep and provide a welcome depth to the image. Skin textures and hair are improved, but still suffer from the light haze I mentioned before.

All things considered, the series looks much better here than it did on the season one Blu-ray release and -- as you would expect -- isn't nearly as blocky as it is on Showtime HD. Fans should be quite happy when they see how well the second season of this show has been treated. 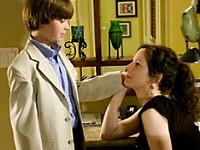 Showtime is obviously out to impress, as 'Weeds' continues to receive some of the best audio specs on the market. This edition of 'Weeds: Season Two' features a surprise uncompressed PCM 7.1 surround track, plus a Dolby Digital EX 5.1 surround track (640 kbps).

Not to look a gift horse in the mouth, but a direct compare of the two tracks reveals that this conversation-heavy show doesn't quite have the sort of oomph to take full advantage of a top-of-the-line 7.1 track. While room acoustics, bass beats, and dialogue receive a slight improvement, otherwise there's not a huge difference between the two.

Still, in both cases, ambiance is extremely convincing and the music pulses from every direction for anyone blessed with a full set of speakers. The resulting soundfield is realistic, subtle, and keenly reproduces each room's acoustic properties. Most importantly, I'm happy to report that channel movement is much smoother than it is on the 6.1 DTS track on the season one Blu-ray release. 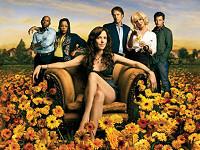 'Weeds: Season Two' includes a massive collection of supplemental features. Note that all of the content on this Blu-ray release is also available on the standard DVD, and all of the video-based extras are presented in 480i/p only.

Unlike last time around, Kohan doesn't have her child in the room, but the kid's absence seems to leave her emotionless and boring. Luckily, all of the other commentaries are top notch entertainment and provide a good mix of anecdotes (Salsberg, Spiro, Benabib, and Zisk), bizarre facts (Craig X), and hilarious observations (Nealon and Malco). Again, Nealon steals the show and delivers my favorite of the bunch -- his deadpan delivery had me laughing out loud on more than a few occasions.

More laughs can be found in "Conrad's Grow Room" (10 minutes). This featurette highlights Malco and Craig X as they investigate hydroponics and the methods required to grow a successful garden. This is a thinly-veiled, tongue-in-cheek extra that fits in perfectly with the tone of the series. You'll also find "Cream of the Crop" (6 minutes) -- a similar featurette that showcases more lessons with Craig X. This isn't as strong, but still made me smile.

Moving on, a group of six pop-up trivia tracks make an appearance on "Last Tango in Agrestic," "Crush Girls Love Panic," "Mrs. Botwin's Neighborhood," "Must Find Toes," "Yeah Like Tomatoes," and "Miles Deep and a Foot Wide." This sort of thing has never appealed to me, but hardcore fans of the show will likely appreciate it.

Rounding out the package are some more minor additions, including a basic "Gag Reel" (2 minutes), a handful of "Huskeroo Commercials" (1 minute) for extra-large clothing, an extended performance by a Reggae Band called "Jammin' Nation" (5 minutes), a pot dictionary of sorts called "Slanging 101" (2 minutes), and a photo montage of the equipment growers use. Finally, four montages highlight music from the show, featuring the band Polyphonic Spree. 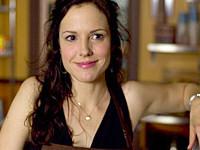 'Weeds' is not only funny and original, but it gets better with every episode in the show's darker second season. This Blu-ray release is a smart purchase all around -- it boasts an uncompressed 7.1 audio package, a ton of supplemental features, and picture quality that fixes most of the problems with the first season's Blu-ray release. If you haven't seen season one, you'll probably want to start there, but this one's certainly an easy recommend for fans of the show.

Sale Price 9.83
List Price 14.97
Buy Now
3rd Party 5.83
In Stock.
See what people are saying about this story or others
See Comments in Forum
Previous Next
Pre-Orders
Tomorrow's latest releases