It's hard to believe, but Cary Grant was once a journeyman actor, and Kino's Cary Grant Collection celebrates that early stage of the screen legend's career. Three little-known comedies - Ladies Should Listen, Big Brown Eyes, and Wedding Present - comprise this handsome box set and Grant infuses them with madcap energy and plenty of debonair charm. All three movies could use some restorative work, but the transfers are quite watchable and a couple of commentary tracks supply welcome context. Though the films are hardly memorable, Kino deserves kudos for releasing this rare cavalcade of Cary that will certainly thrill the star's legion of admirers. For Fans Only.

Before Cary Grant became "Cary Grant," he toiled for several years as a Paramount contract player in the early 1930s, portraying a variety of character types in a variety of ho-hum films with a variety of top-tier actresses (Mae West, Marlene Dietrich, and Sylvia Sidney chief among them) while struggling to define his screen persona. This period of apprenticeship and discovery is often overlooked in discussions of Grant's career, largely because he made so many classic movies after becoming a bona fide star. Yet despite its lack of distinction, Grant's Paramount tenure was a vital component in his professional development, and Kino provides a welcome taste of it with its three-disc Cary Grant Collection, which revives a trio of long-forgotten comedies.

I consider myself a knowledgeable Grant fan, but must admit to being utterly unfamiliar with Ladies Should Listen, Big Brown Eyes, and Wedding Present before this box set arrived on my doorstep...and now I know why. All three films flaunt a fair degree of charm and Grant is charming in them, but they lack distinction and are eminently forgettable. And yet I still enjoyed discovering these little-known movies and exploring this early segment of Grant's career. If you're a diehard Grant fan, you will, too. 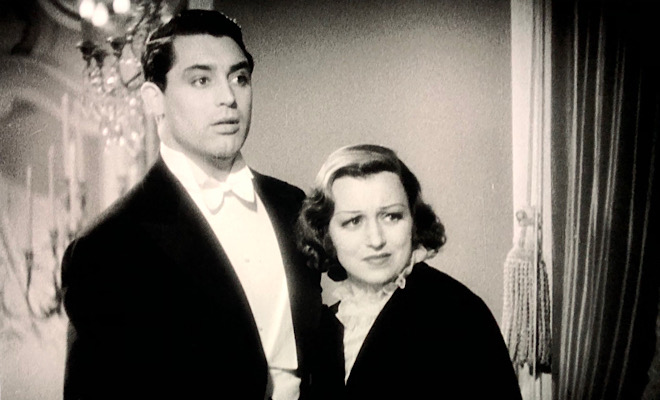 Remember Bells Are Ringing, the charming Judy Holliday musical about a busybody answering service operator who gets a crush on one of her clients? Well, the idea for that story just might have come from this obscure farce about a dashing bachelor whose guardian angel is the pert, pretty telephone operator in his Paris apartment building. As Julian De Lussac (Grant) tries to finesse the wiles of a seductive siren out to swindle him and a rabidly smitten plain Jane who throws herself at him with reckless abandon, Anna Mirelle (Frances Drake) does her best to shield Julian from the amorous slings and arrows bombarding him.

Complications, of course, spiral out of control in this madcap romp that's packed with energy, a few laugh-out-loud moments, and spirited performances by a fine, if largely unheralded cast. Journeyman director Frank Tuttle's straightforward presentation lacks panache and the wildly improbable story doesn't even try to reflect reality, but the film remains a pleasant and blessedly brief diversion (it runs just 62 minutes) that only marginally overstays it welcome.

Grant previews the debonair comic persona that would serve him so well once he honed it to perfection in The Awful Truth a few years later. His double-takes and lively line deliveries keep the film's engine humming, and his acrobatic talents get a bit of a workout, too. He also generates some sparks with Drake, a lovely actress with palpable screen presence who never quite made her mark in Hollywood, despite appearing in a few noteworthy films. Her part here isn't particularly showy, but she makes a solid impression.

Ladies Should Listen won't make anyone prick up their ears, but it does provoke some laughter while showcasing Grant's rising star quality. Rating: 3 stars 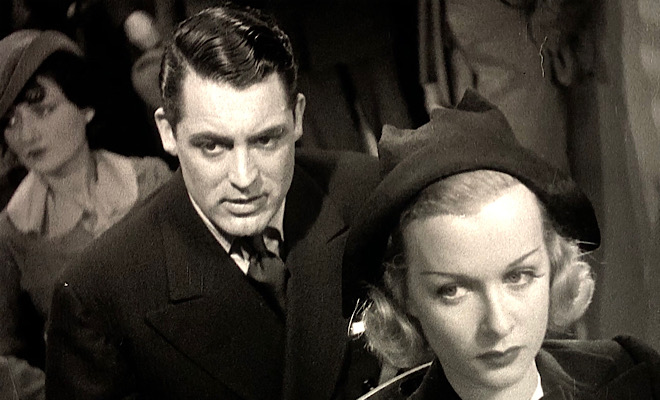 It's hard to picture Grant as a tough-talking New York City cop, but in Big Brown Eyes that's exactly the character he plays. Luckily, he doesn't attempt a Big Apple accent in this fast-talking romantic comedy-crime drama hybrid, but does show off some (bad) ventriloquist skills that come in handy at the film's climax.

When a dowager's diamonds go missing, two suave detectives try to recover them for her. Private dick Richard Morley (Walter Pidgeon) gains the trust of Mrs. Cole (Marjorie Gateson), but it soon becomes apparent - to the audience - he and his henchmen are thick as thieves with the thieves who stole the jewels. That leaves it up to NYPD detective Danny Barr (Grant) and his on-again-off-again girlfriend Eve Fallon (Joan Bennett), a sassy manicurist turned intrepid newspaper reporter, to bust open the case. Plenty of snappy banter, some fisticuffs, and the shocking accidental shooting of a baby in a carriage(!) follow in this rollercoaster movie that breezily mixes laughs with thrills.

Director Raoul Walsh, who co-wrote the screenplay and would go on to helm such classics as The Roaring Twenties, High Sierra, and White Heat, tries his best to energize the generic material, and largely succeeds. Big Brown Eyes rolls merrily along, thanks to his quick-cutting technique, off-kilter camera angles, and breathless pacing. Walsh also draws fine performances from his top-notch actors, all of whom were still climbing the rungs of Hollywood's ladder at the time.

Grant and Bennett make an engaging team. Their good-natured sparring and zippy portrayals fuel the film while masking (some of) the story's deficiencies. It's rare to see Pidgeon, who we know best as the pipe-smoking, stiff-upper-lip Mr. Miniver, as a sadistic, calculating villain, and he handles the role well. A young Lloyd Nolan also impresses as Pidgeon's right-hand man whose short fuse and itchy trigger finger jumpstarts the plot.

Big Brown Eyes never will be regarded as a highlight of anyone's career, but it's another interesting, rarely-seen Grant curio that's fun to rediscover. Rating: 3 stars 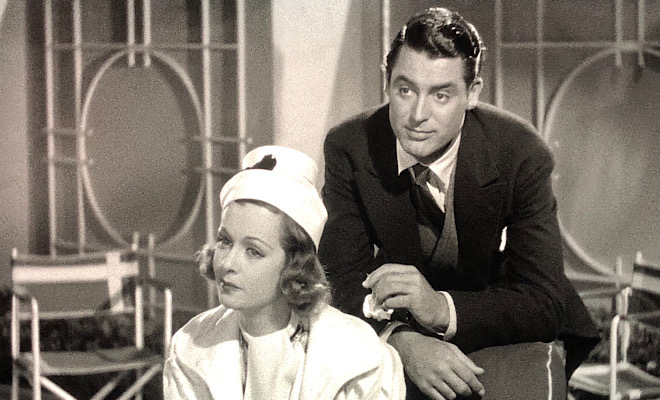 Screwball comedies began to hit their stride in 1936, but for every classic like My Man Godfrey and The Awful Truth, Hollywood produced plenty of clunkers. Wedding Present is one of them. This forerunner to His Girl Friday reunites Grant with Joan Bennett, but without the snap, crackle, and pop of a Ben Hecht-Charles MacArthur script and Rosalind Russell as a leading lady, the film sputters and stalls. If Wedding Present is guilty of anything, it's simply the crime of trying too hard. Grant and Bennett knock themselves out striving to milk some laughs out of the weak material, but their tireless efforts yield little fruit.

Charlie Mason (Grant) and Rusty Fleming (Bennett) are crackerjack newspaper reporters for a busy Chicago daily. They're also in love, but after jokester Charlie pulls a goofy stunt that accidentally sabotages their city hall wedding, the couple puts off their nuptials because Rusty is afraid they'd drive each other crazy. The two work well together, but when Charlie gets promoted and becomes Rusty's boss, friction ensues. From there, a host of zany complications split them up, bring them together, then split them up again, but when Rusty becomes involved with an erudite author (Conrad Nagel) who wants to marry her, Charlie springs into action and plots to sabotage Rusty's wedding again in the hope of winning her back.

Just as they do in Big Brown Eyes, Grant and Bennett make a winning team. (Interestingly, she gets top billing here, whereas he receives top billing in Big Brown Eyes.) Both actors bring plenty of personality and admirable energy to the film, but the meandering screenplay continually puts them in ridiculous situations that strain credulity even by screwball's broad standards. Wedding Present only runs 81 minutes, but it seems a good deal longer.

A fine supporting cast that includes George Bancroft, Gene Lockhart, and William Demarest supplies some much-needed zing, but not enough to salvage this woefully wacky comedy that would effectively end Grant's Hollywood apprenticeship. The following year he would star in Topper and The Awful Truth and at last become the Cary Grant we all know and love. That's the only gift Wedding Present gives us. Rating: 2-1/2 stars 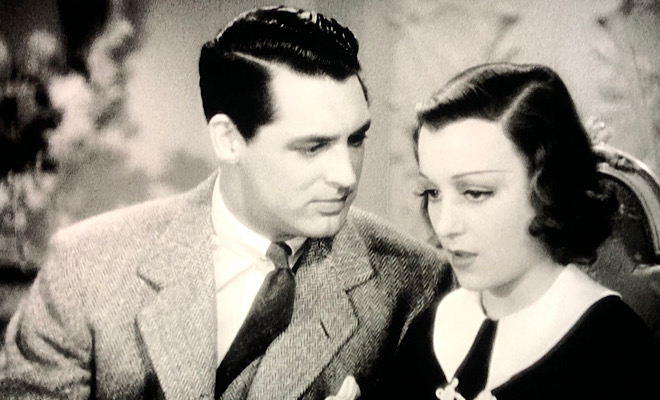 Cary Grant Collection arrives on Blu-ray in box set packaging with three individual disc cases inside. Video codec is 1080p/AVC MPEG-4 and audio DTS-HD Master Audio 2.0 mono. Once the discs are inserted into the player, the static menus with music immediately pop up; no previews or promos precede them.

Despite the lack of restorative work, all three films make a nice transition to Blu-ray. The 1080p/AVC MPEG-4 transfers are hardly clean - intermittent scratches, vertical lines, blotches, marks, rough transitions, and image shaking are some of the malaises afflicting these films - but clarity and contrast are generally quite good. Some intermittent softness creeps in now and then and grain levels occasionally fluctuate, but strong black levels, bright, stable whites, and beautifully varied grays help produce vibrant, pleasing images. Background elements are easy to discern, good shadow delineation keeps crush largely at bay, and sharp close-ups, especially those in Big Brown Eyes, showcase fine facial features well. Considering the age and relative obscurity of all three films in this collection, these transfers serve their sources well and certainly show off Grant to terrific advantage.

All three films include DTS-HD Master Audio mono tracks that supply well-modulated sound. Sonic accents like gunshots, fisticuffs, slamming doors, and sirens are crisp and distinct, and the potent thunderstorm effects in Ladies Should Listen produce several hefty rumbles. A wide dynamic scale gives the sporadic music cues plenty of room to breathe, and all the repartee in Ladies Should Listen and Big Brown Eyes is easy to comprehend. The Wedding Present track is the weakest in this collection, exhibiting a muffled tone throughout that makes understanding the dialogue a strain.

Any age-related hiss, pops, and crackle have been erased, and though a few brief audio dropouts on Ladies Should Listen take us by surprise, they don't obscure any important information. All in all, the audio in this collection is average, but considering the advanced age of these films and lack of restoration, we really shouldn't expect anything more.

Each disc includes a couple of trailers, but none for the films in this collection. The two Grant-Bennett movies are also supplemented with individual audio commentaries. Film critic Nick Pinkerton tackles the chores for Big Brown Eyes, putting the film in its historical context, citing its influences, and providing ad nauseam career bios for almost every cast member. He also examines Grant's appeal and quotes some of the film's reviews. Film historian Kat Ellinger chats about Wedding Present, gamely talking for 81 minutes about a movie that really doesn't deserve to be talked about much at all. She mostly examines the development of Grant's persona and Bennett's evolution and appeal, but also notes the differences between the short story upon which Wedding Present is based and the final screenplay, outlines the elements of screwball comedy, and compares the film to other newspaper features like The Front Page and His Girl Friday. Best of all, she doesn't try to beef up the reputation of Wedding Present; she acknowledges it's a subpar film and unworthy of both Grant and Bennett. Ellinger is smart, well-spoken, and genuine, and even when she discusses an inferior film, she's interesting.

You've gotta be a diehard Cary Grant fan to care much about the three films in Kino's Cary Grant Collection, but if you qualify, you'll get a kick out of this trio of vintage comedies that showcases the burgeoning talents of a soon-to-be Hollywood legend. None of the movies are memorable (director Raoul Walsh's Big Brown Eyes is the best of the bunch), but they're breezy and fun while they last, and Grant gamely gives them his all. The transfers are better than expected and a couple of commentaries provide some context, but despite the universal appeal of Cary Grant, this Cary Grant Collection is strictly for fans only.