The best film pairing of Mickey Rooney and Judy Garland at last comes to Blu-ray, and Warner Archive honors it with a new 4K master produced from the finest surviving elements, upgraded audio, and all the extras from the 2007 DVD. Girl Crazy not only showcases the dynamite talents of two enduring dynamos, it also features a first-class score by George and Ira Gershwin that includes such standards as "I Got Rhythm," "Embraceable You," and "But Not for Me," a bubbly cast, and a lavish rodeo finale staged by Busby Berkeley. The story of a pampered playboy who's shipped out West to a middle-of-nowhere college to learn some discipline and responsibility, but instead falls in love with the dean's fresh-faced granddaughter is as peppy as Rooney and Garland themselves, but it's the top-flight numbers that really make this musical memorable. I'm crazy about Girl Crazy, and if you love Golden Age musicals, Rooney, and especially Garland, you will be, too. Highly recommended.

He was a bundle of unbridled energy, a brash, boisterous boy wonder with an indomitable will to entertain. She was the wholesome, fresh-faced girl next door, an appealing, vivacious performer who oozed sincerity and brandished a voice so big it could raise the rafters, buoy the most downtrodden spirit, or break your heart - sometimes all at once. So when Mickey Rooney and Judy Garland joined forces in 1939 for a series of "backyard" musicals, the results exceeded even MGM's expectations. He was 19, she was 17, yet both already were seasoned theatrical vets who'd been on stage regularly since they were toddlers.

With deceptive ease, they captivated audiences with their youthful vigor, comfortable chemistry, winning personalities, and irrepressible talent. Sure, their "let's-put-on-a-show" films possess some corny and repetitive elements, but back in their heyday, Mickey and Judy were as hip as any star of High School Musical or Glee. The innocence, optimism, and vitality that define their screen personas and pervade the four starring vehicles they made together - Babes in Arms, Strike Up the Band, Babes on Broadway, and Girl Crazy - haven't dimmed one iota over the past 80 years. Why? Because it's real.

Girl Crazy, a loose adaptation of the popular 1930 Broadway musical, would be the team's final hurrah. (Mickey and Judy would briefly share the screen five years later in 1948, performing a duet in MGM's star-studded Rodgers-and-Hart biopic Words and Music, but they would never again co-star.) It also stands as arguably their best film together. Packed with memorable tunes by George and Ira Gershwin and featuring a breezy, amusing plot, Girl Crazy is as adorable and delightful as its two iconic stars, and holds up surprisingly well more than 75 years after its premiere. 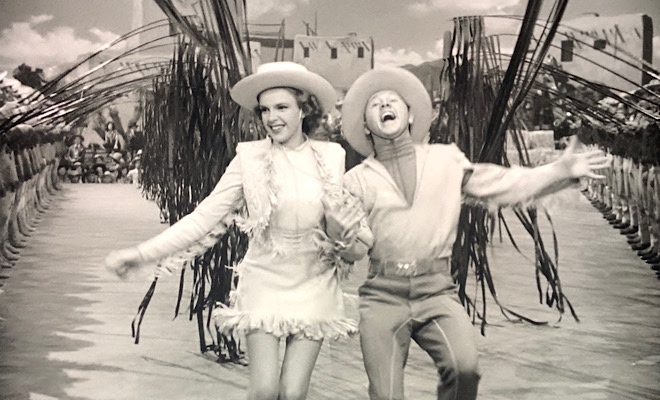 Rooney plays Danny Churchill, an aimless New York playboy who goes gaga over every girl he meets. His stern, disapproving father hopes to cure his son's addiction - and make a man of him - by sending Danny way, way out west to Cody College, an all-male mining school in the desolate wilds of Wyoming. That plan backfires, though, because minutes after Danny gets off the train he meets and falls hopelessly in love with Ginger Gray (Garland), the dean's cute-as-a-button granddaughter and only female within a 50-mile radius. Ginger, however, abhors Danny's superior attitude and silver-spoon sense of privilege and rebuffs his shameless flirting. Of course, the persistent Danny eventually melts Ginger's heart, and when the school encounters financial troubles, the duo leaps to its rescue by organizing a splashy benefit rodeo to raise funds and boost enrollment.

Directed by Norman Taurog, who's best known for helming six Dean Martin-Jerry Lewis comedies and a whopping nine Elvis Presley musicals (Taurog also held the record as the youngest man ever to win a Best Director Oscar for 86 years until Damien Chazelle eclipsed him in 2017), Girl Crazy sails along on the strength of Rooney's potent personality, Garland's powerhouse pipes, and a sublime Gershwin score that includes such standards as "Bidin' My Time," "Embraceable You," and "But Not for Me," a beautifully nuanced, exquisitely photographed Garland ballad. There's also the clever, spirited Garland-Rooney duet "Could You Use Me?" that's sung while the two drive through the desert, a sizzling specialty by up-and-comer June Allyson ("Treat Me Rough"), and an impressive orchestral arrangement of "Fascinatin' Rhythm" (a song not in the original score) performed by Tommy Dorsey and his swinging big band.

All those numbers, though, are just a warm-up for the mammoth, eight-minute "I Got Rhythm" finale. This rootin'-tootin' spectacle featuring cowgirls, whips, and cannons, along with full-throated vocals by Garland and a thrilling Dorsey arrangement was conceived and executed by Busby Berkeley, who had directed the three previous Mickey-Judy films. He was slated to helm Girl Crazy as well, but after spending a bona fide fortune on the "I Got Rhythm" extravaganza - during which he worked Garland like a whip-cracking slave-driver, torturing her with endless, needless takes until she collapsed from nervous exhaustion - he was fired. 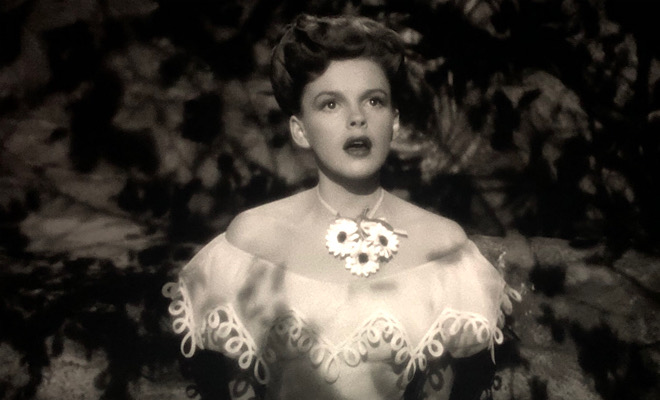 Thankfully, Garland recovered from all the bullying, and under Taurog's more tender tutelage she files an ebullient, carefree performance. Her infectious laughter and natural loveliness infuse Girl Crazy with more joie de vivre than any previous Mickey-Judy picture, and the lilting Gershwin melodies suit her to a T.

The tone of the movie also differs from the pair's earlier efforts. By the time Girl Crazy went into production in 1943, the balance of power had shifted in the Rooney-Garland on-screen relationship, as her ascending star poised itself to vault ahead of his. The first three Mickey-Judy films largely showcase Rooney's talents, but Girl Crazy at last spotlights the special gifts of the 21-year-old Garland, who had evolved into a refined performer ready and able to tackle adult roles and sophisticated material. While Mickey seems content to recycle his goofy adolescent shtick and shamelessly mug for the camera, Judy brings a welcome maturity to the film that elevates it to a higher plane. The plot mechanics reflect this change as well, as Garland is no longer the ugly duckling wistfully pining for the oblivious and self-absorbed Rooney. In Girl Crazy, Judy is the sought-after prize and Mickey is the lovesick puppy relentlessly pursuing her. Garland may not get as much screen time as Rooney, but she consistently overshadows him.

In supporting roles, a young Nancy Walker as Ginger's peppy cousin Polly perks up every scene in which she appears; Guy Kibbee brings warmth and sardonic humor to his role as the college dean; and "Rags" Ragland milks a few laughs (and tears) as a transplanted New York City cabbie who befriends Danny when no one else will. Eagle eyes will spot Peter Lawford in a one-line bit (his British accent seems more than a little out of place in rural Wyoming) and future director Charles Walters (Easter Parade, Summer Stock), who dances with Garland during the "Embraceable You" number.

Girl Crazy may be a modest musical by MGM's glittering standards, but it's as lively as a bucking bronco and as sweet as a lamb. It's got rhythm, it's got music, it's got laughs and love and plenty of vim and verve. As the song says, "Who could ask for anything more?" 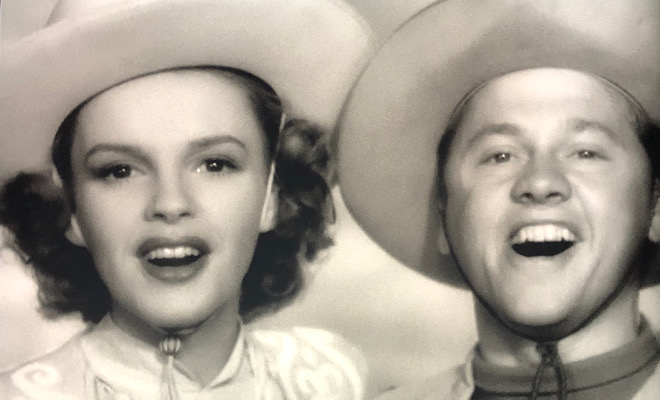 Girl Crazy arrives on Blu-ray packaged in a standard case. Video codec is 1080p/AVC MPEG-4 and audio is DTS-HD Master Audio 2.0 mono. Once the disc is inserted into the player, the static menu with music immediately pops up; no previews or promos precede it.

Warner Archive unveils another beautiful 1080p/AVC MPEG-4 transfer, thanks to a brand new 4K restoration produced from the film's best surviving elements. (Sadly, the original Girl Crazy negative no longer exists.) Deep blacks, crisp whites, and nicely varied grays distinguish this bright, vibrant rendering, which maintains the film's natural grain structure and preserves the integrity of the cinematography by the great William Daniels and Robert Planck. Though some softness creeps into the image from time to time (most likely the result of different sources), the overall picture bursts with excellent clarity and contrast. Shadow delineation is very good - crush is never an issue - and close-ups are gloriously sharp and lush, showcasing fine facial features while still exuding old-fashioned Hollywood glamor.

This transfer is a huge step up from the 2007 DVD. Grain is greatly reduced (it was quite heavy on the DVD), but the picture's film-like feel is never compromised. The image also flaunts much more vibrancy and consistency. The opening nightclub sequence on the DVD was maddeningly dark, but that's been corrected here, and all the nicks, marks, and scratches that plagued the previous DVD have been erased, leaving a wonderfully clean, detailed picture. These night-and-day improvements are guaranteed to dazzle Mickey-Judy fans, who shouldn't hesitate to upgrade.

The DTS-HD Master Audio 2.0 mono track easily outperforms the lossy sound on the previous DVD. Not surprisingly, the most noticeable improvement in audio quality comes during the musical numbers, which flaunt far more fidelity, tonal depth, and dynamic range than ever before. The best examples of this are the numbers that feature Tommy Dorsey's swinging big band. "Treat Me Rough," the "I Got Rhythm" finale, and especially the orchestra's breathtaking arrangement of "Fascinatin' Rhythm" really wow the senses with crystal clear tones that showcase individual instruments and make us appreciate the artistry and talent of these virtuoso, yet too often unsung musicians. Garland's vocals sound richer and fuller than ever before, but her powerhouse pipes and all the screaming brass never once approach the brink of distortion.

Even atmospherics like chirping birds and galloping horse hooves seem more pronounced. All the dialogue is easy to comprehend, too, and no age-related hiss, pops, or crackle intrude. Even if the video transfer wasn't up to snuff, I'd still recommend upgrading to Blu-ray on the strength of this potent lossless track, which makes Girl Crazy sing like never before.

All the extras from the 2007 DVD have been ported over to this release.

Mickey Rooney and Judy Garland light up the screen in their final starring vehicle that features a dynamite Gershwin score, a top-notch cast, and a dazzling finale staged by the one-and-only Busby Berkeley. The story of a pampered playboy who's sent to a western mining college to become a man and falls in love with the dean's perky granddaughter is amusing enough, but it's memorable songs like "I Got Rhythm," "Embraceable You," and "But Not for Me" that really make Girl Crazy sing. A terrific transfer produced from the best surviving elements, upgraded audio, and all the extras from the 2007 DVD distinguish Warner Archive's long-awaited Blu-ray presentation, which beautifully showcases the captivating talents of Rooney and Garland. Who could ask for anything more? Highly recommended.