Pretty as a picture in glorious Technicolor, but lacking a punchy narrative, Million Dollar Mermaid never quite lives up to its title. Esther Williams puts her heart and soul into portraying real-life swimming star Annette Kellerman, but she doesn't get wet often enough to keep this big-budget biopic afloat. A brand new, eye-popping 4K restoration is the real star of Warner Archive's high-quality Blu-ray presentation, which also features lossless audio and all the extras from the 2009 DVD. Million Dollar Mermaid might not float everyone's boat, but it will certainly thrill Williams' throng of admirers. For Fans Only.

With a title like Million Dollar Mermaid, a star like Esther Williams, and a subject like real-life aquatic legend Annette Kellerman, you'd think there'd be more swimming per capita in director Mervyn LeRoy's film than in any other production to date. Well, there isn't, and that's the biggest problem with this otherwise splashy chronicle of Kellerman's early years. Though there's a lot of talk about swimming - and too much talk about a lot of other things - Williams remains maddeningly dry for most of the movie. And by keeping that beautiful fish out of the water, LeRoy sucks most of the air out of his film.

More of a straight biopic than a musical (there's not a single song in the entire picture), Million Dollar Mermaid relies on drama for much of its running time and there's just not enough of it in Kellerman's life to sustain the film, despite the best efforts of screenwriter Everett Freeman to manufacture it. The episodic presentation features some colorful, engaging, and touching moments, but the film's major attractions - two spectacular acrobatic and kaleidoscopic water ballets designed by Busby Berkeley - have nothing to do with Kellerman at all. Yes, the Australian swimming star performed at New York City's famed Hippodrome, but in nothing remotely resembling what Berkeley concocts here.

Unfortunately, we have to wait 64 minutes for the ballets to begin, and then they're crammed together in one 20-minute sequence, which includes a montage of production number clips from previous Williams movies. Berkeley employs trapezes, slides, fountains, billowing colored smoke, sparklers, rising pedestals, and his patented geometric formations to create fantastical aquatic fantasies that dazzle the senses. If you're a fan of the MGM musicals documentary That's Entertainment!, you'll likely recognize all the footage, but now that it's been spectacularly restored by the folks at Warner, it looks more opulent than ever before. 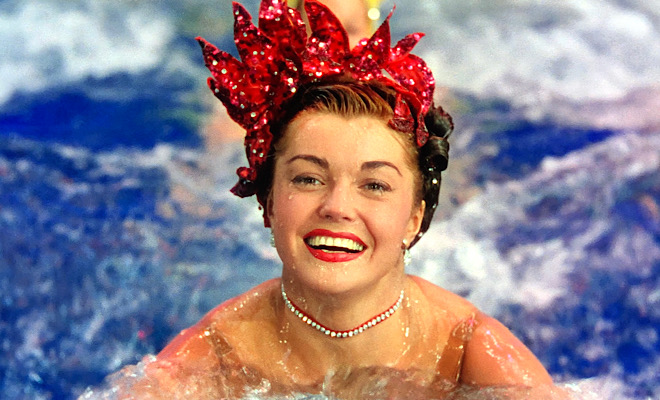 Kellerman's story fits Williams like the snug one-piece bathing suit that scandalized society and spawned a celebrated court case when Kellerman wore it on a beach in 1907. For once, writers didn't have to invent flimsy reasons for Williams to wade into the water, which makes it all the more puzzling why she stays dry so much of the time. Though Williams is a decent actress, she's not magnetic enough to hold our attention for long periods without swimming, and that's exactly what Million Dollar Mermaid requires her to do.

The narrative also addresses Kellerman's childhood leg affliction that required her to wear braces (Donna Corcoran nicely portrays Kellerman as a young girl), charts her evolution from champion swimmer to aquatic performer and eventually silent movie star, and touchingly depicts her close relationship with her devoted father, played with typical grace and warmth by Walter Pidgeon. That sounds like enough plot to appropriately honor Kellerman and propel the film, but every Hollywood biopic has to have some romance, right? I'm not averse to that, but instead of just letting Kellerman fall in love and marry her one-and-only husband James Sullivan (Victor Mature) - their happy union lasted 63 years! - the script puts several road blocks between them and dreams up an equally tepid secondary romance between Kellerman and the director of the Hippodrome, Alfred Harper (David Brian), to stir up some dramatic conflict.

Million Dollar Mermaid also never explains the significance of its title. Kellerman was the first performer to star in a million dollar movie production and first swimmer to swim professionally in a bona fide mermaid suit. Those may seem like trivial details, but they would have added some factual gravitas to what otherwise seems like a gimmicky Hollywood title. 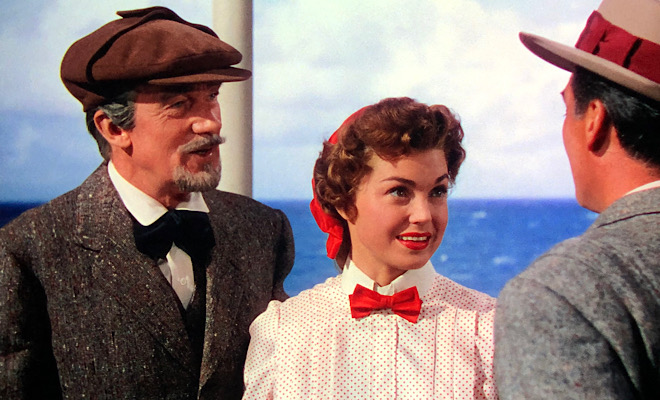 The film also, for some inexplicable reason, invents a fictional backstory for Sullivan, making him a slick, quasi-shady impresario who ultimately brings future silent canine star Rin Tin Tin to Hollywood. There's no connection between Sullivan and the megastar dog, and bringing Rin Tin Tin into an Esther Williams swimming movie isn't just misguided, it also subtly implies that Kellerman, like a performing seal, is just a trained animal act, too.

I don't mean to be hard on Million Dollar Mermaid. In many ways, it's a charming, upbeat, nostalgic movie that pays tribute to a fearless female trailblazer. Williams handles her chores in and out of the water with aplomb and Berkeley's water ballets terrifically showcase her beauty, grace, and athletic prowess. Both Mature and Brian are rather bland, but future Maytag repairman Jesse White tries to enliven the proceedings with his inimitable comic flair. Though LeRoy's languorous direction and Freeman's ponderous script draw out the story a bit too long, George Folsey's breathtaking Technicolor cinematography keeps the eyes engaged even when the brain disconnects.

I rarely expect biopics to be accurate, but Million Dollar Mermaid takes more liberties than most. The film is mostly "all wet" where Kellerman is concerned, yet it doesn't let Williams get wet enough to sufficiently show off her aquatic talents. Though it's painless and entertaining enough, a little more swimming and a little less talk would give Million Dollar Mermaid more bang for all those bucks. 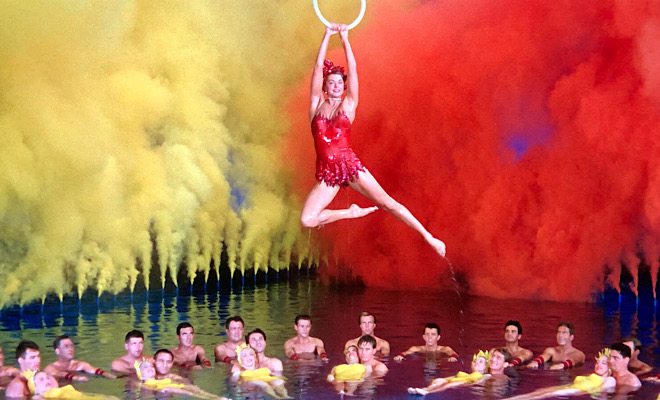 Million Dollar Mermaid arrives on Blu-ray packaged in a standard case. Video codec is 1080p/AVC MPEG-4 and audio is DTS-HD Master Audio 2.0 mono. Once the disc is inserted into the player, the static menu with music immediately pops up; no previews or promos precede it.

A brand new 4K restoration makes Million Dollar Mermaid look like a million bucks! The dreamy 1080p/AVC MPEG-4 transfer bursts with all the glorious rainbow hues of Technicolor and faithfully honors the Oscar-nominated cinematography of 13-time(!) nominee George Folsey. Primaries pop, especially reds and yellows during the water ballet sequences, while the delicate pastels in Williams' floral hats and lavender chiffon wrap (see photos below) supply beautiful shadings that produce a vibrant, well-balanced picture. Excellent contrast and clarity abound (the image is so crisp it's all too obvious when Williams' double performs the more dangerous stunts during the water ballets) and a natural grain structure preserves the look and feel of celluloid. 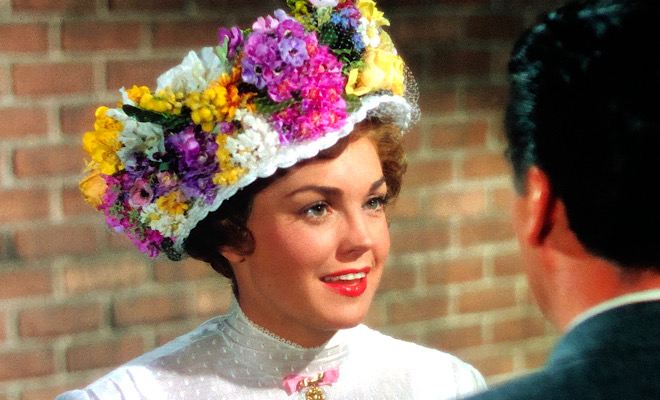 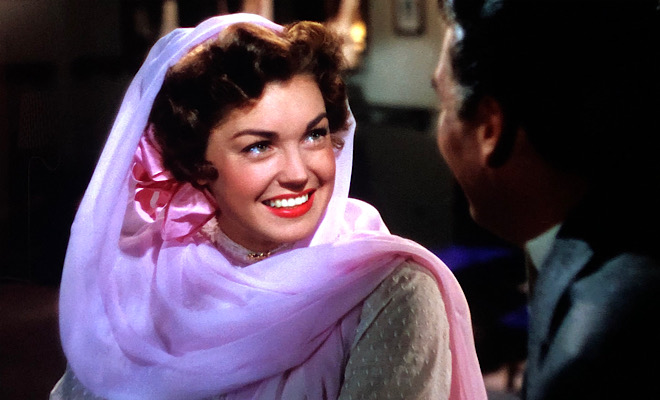 Patterns remain rock solid throughout, flesh tones appear natural, and sharp close-ups highlight fine facial features while showcasing Williams' beauty. Any age-related nicks, marks, or scratches have been meticulously erased, leaving a pristine image that heightens the impact of all the spectacular swimming scenes. I don't have a DVD copy to compare it to, but it's impossible to imagine Million Dollar Mermaid looking any better than it does in this terrific, five-star Blu-ray presentation.

The DTS-HD Master Audio 2.0 mono track supplies clear, well-modulated sound. A wide dynamic scale handles all the highs and lows of the orchestrations without a hint of distortion, and all the dialogue is easy to comprehend. Sonic accents like cracking glass and water effects are crisp and distinct, and no age-related hiss, pops, or crackle intrude.

All the supplements from the 2009 DVD have been ported over to this release.

Australian swimming legend Annette Kellerman deserves a first-class biopic, but unfortunately Million Dollar Mermaid isn't it. Though Esther Williams makes a big cinematic splash whenever she gets in the water, she's dry far too much of the time in director Mervyn LeRoy's plodding biopic that rarely brings its subject to life. Glorious Technicolor and a couple of dazzling Busby Berkeley aquatic sequences aren't enough to salvage this pretty-as-a-picture but dull-as-dishwater drama that engenders respect for Kellerman, but not enough love to make it memorable. Warner Archive's brand new 4K, five-star restoration is lovely to look at it, the lossless audio sounds great, and all the extras from the 2009 DVD  have been ported over, but unless you're a diehard Williams admirer, Million Dollar Mermaid might not float your boat. For Fans Only.