It wouldn't be summer without a shark movie to devour. Befitting of 2020, Deep Blue Sea 3 may not be the shark movie we want, but it may be the one we need right now. No, not a great movie - it's highly entertaining! As we've already seen with the premiss in two prior films, big mean smart sharks terrorize a group of stupid people stuck on a small man-made island. It may take a bit to get going, but it's a hoot when the blood hits the water. Warner Brothers unleashes Deep Blue Sea 3 to Blu-ray with an alright transfer that hits the main marks with a solid audio mix. Bonus features are slim. If you need a shark movie I can recommend a dozen better entries, but if you're looking for genuine mindless fun, you'll find it here. Worth A Look

"You have a double PHD in shark neurology..."

Welcome to the remote island of Little Happy - a manmade fishing village that is sinking from sea rise and global warming. Oceanographer and online nature vlogger Emma Collins (Tania Raymonde), her divemaster Shaw (Emerson Brooks), and her nerdy tech staff catalog the robust marine life that calls the reefs home. Using state of the art tracking tech they hope to show the world the precipitous decline of ocean life caused by global warming. When three genetically enhanced super bull sharks enter the aquatic paradise followed by a team of mercenaries - Emma and her team will have to fight for survival above and below the ocean. 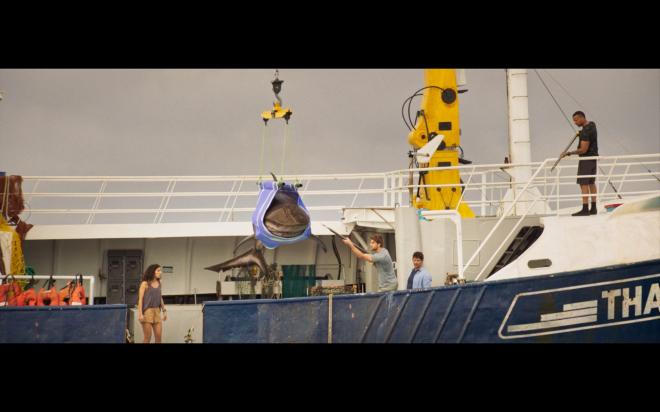 Come on, it's called Deep Blue Sea 3 - you know walking in that this movie already has an uphill battle towards greatness. The first film was a fun Jurassic Park ripoff with sharks. The second was a completely forgettable repeat of that movie. This one - while not amazing is at the very least entertaining! It starts out pretty damn tepid stuffed with cardboard characters. Then the mercenaries arrive and all of a sudden you have a movie with half the supporting cast of The Last Ship marking time as fish fodder to a bunch of CGI sharks!

It may take a while to get swimming, but when that first kill comes up - you know you're in for a treat when a man bit in half propelled by a little mini-sub crosses the screen with his intestines streaming out behind him. And that's not even the most ridiculous shark kill of the movie! While I wish some more practical gore effects had been used, this movie is not short on blood and guts when it gets going. That's to say nothing of the humans! I really want to show you some of the shark kills but I don't want to spoil those, so instead, I'm going to show you what is now probably my favorite explosion body launch:

It could be sleep deprivation from my six-month-old son, maybe it's the Nerf-colored grenade launcher, maybe it's the dramatic overacting… maybe it's the catapulting stunt person mid-run - but if you love schlocky creature flicks this scene kinda sets the tone for Deep Blue Sea 3 and it's not even the best moment of the movie!

Buoyed by a welcome feeling of self-awareness, director John Pogue leans into the comedic aspects of the movie without overplaying the hand. You can see the setup for a shark kill coming a mile away but he lets his actors chew the scenery just a little bit longer before they dive head-on into the giant tooth-filled mouth of a breaching shark. As the ridiculousness stacks up, the film builds to a pretty gnarly finale right out of The Terminator.

This movie is honestly critic-proof. I could spend the day shredding it but you know if this was on T.V. at one in the morning and you can't sleep - you'd watch it because why the hell not? I rewatched so many of these kills in slow-mo - I wish I had my old movie group in Denver again, this would be on our watch list for sure. If you need brainless fun, there are far worse movies out there. This movie is enjoying itself so go take a break and watch a guy lose his head from a flying shark!

Deep Blue Sea 3 arrives on Blu-ray courtesy of Warner Brothers in a 2-disc Blu-ray + DVD + Digital set. Pressed on a Region-Free BD-25 disc, the discs are housed in a two-disc eco-friendly case with identical slipcover artwork. The disc loads to trailers for upcoming WB direct-to-video releases before arriving at a static image main menu with traditional navigation options.

Deep Blue Sea 3 takes a bite out of a decent enough 1080p transfer. The big issue here appears to be image compression highlighting video noise with edges having a crunchy quality. I wouldn't call it edge enhancement, I didn't see any banding or aliasing, but there is a noisy presence to the image that keeps it from being pristine. Most of the time it looks very good with clean details - middle and close up shots look the best. The underwater nature photography is beautiful stuff allowing the cast to interact with a natural environment with a lot of visual activity. Colors are bold with often stunning primaries. There are some dodgy CGI effects shots that don't quite blend to the live photography, but given what had to be a pretty small effects budget this is a few steps above your average Syfy Channel monster offering. Overall this transfer is pretty good but it's not going to set a new industry standard for greatness.

Deep Blue Sea 3 wins with a solid DTS-HD MA 5.1 audio mix. Dialogue is clean and clear throughout - even through some thick accents there's never an issue even when the music is blasting and explosions are going off left and right. On the explosion front - there are a lot of those and they provide some welcome direction-specific effects while punching the LFE giving the subs some rumble. Atmospherics are pretty great as there are plenty of shots in and out of the water or just along the surface giving the mix clean imaging along the channels. Even during quiet moments, the mix feels like there's something always coming out of the channels. Levels are spot on.

What, no director audio commentary? Sadly Deep Blue Sea 3 doesn't have a very robust bonus feature package. Not that I expected one - but after watching through the movie I kinda wish there was more here than there is. It's actually an impressive little production with a remote island set, some great underwater work, stunts, and some great gore. So it goes…

Knowing that this is the second direct-to-video sequel, you naturally don't expect much from Deep Blue Sea 3. After the second movie, I certainly didn't. But, surprise, surprise - I found myself enjoying this one. It's certainly not a great movie, it's just really entertaining. It'd been a long week and this was the kind of schlocky creature feature I devour every summer. With theaters closed, I needed this more than I thought I did. The plot is goofy, the acting decent enough to sell the show, and the shark kills are nice and gnarly. This movie knows exactly what it is. Warner Brothers serves up Deep Blue Sea 3 to Blu-ray with a decent enough transfer, a solid audio mix, and a couple of short but informative bonus features. If you need some toothy creature fun - you may find yourself surprisingly entertained by this one. I know I was. Worth A Look.