Claire Denis’ enigmatic and deeply poetic Beau Travail makes its HD debut thanks to The Criterion Collection. Replete with tension and raw beauty this loose adaptation of Herman Melville’s Billy Budd centers around an isolated outpost of the French Foreign Legion as a sergeant becomes painfully obsessed with a new recruit. The Criterion Collection brings the film to life with a stunning 4k transfer and a slew of new bonus features well worth exploring. Highly Recommended. 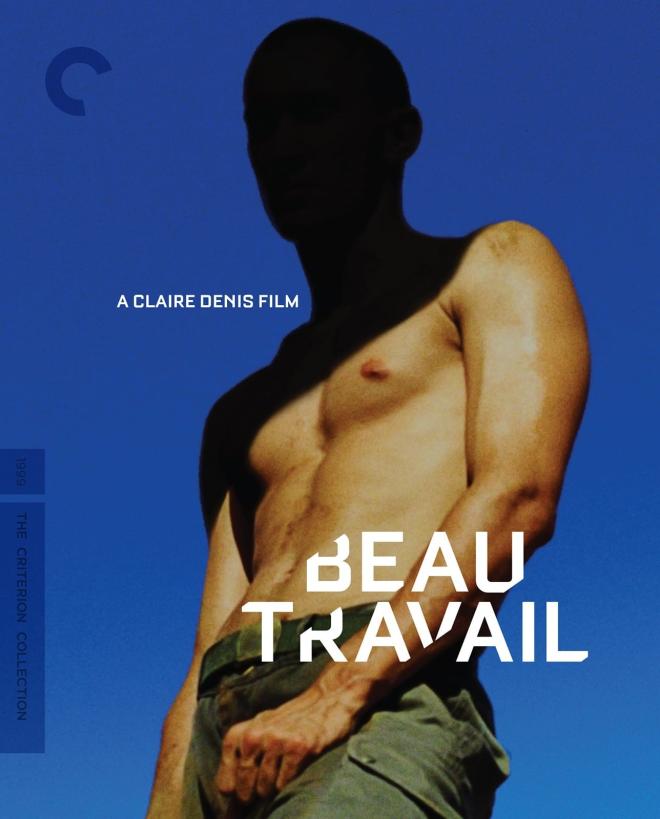 “We all have a trash can deep within.”

Beau Travail reminds me of the meme “How it started / How it's going'' in which a subject is portrayed well at first but by the present time something has gone awry causing a deep rift in your expectations. For our protagonist Galoup his meme starts with a confident and deeply fulfilled Legionnaire serving with honor. Cut to the present. He is stuck in a sad apartment journaling nonsense while sporting sandals with socks wondering where it all went wrong. Galoup’s journey was one born of obsession, jealousy, and sheer determination to rid his life of a vision that reminded him of a life unlived and unrealized. Those familiar with Beau Travail will no doubt remember Galoup’s powerful emotional release at the end of the film signifying his acceptance and rebirth of this new unfettered existence. After a career within the rigid structures of the Legion, his new self is revealed thanks to the rhythm of the night.

Ex-Foreign Legion officer Galoup (Denis Lavant) retraces his memories as a devout Legionnaire whose rigid identity was undone when a new recruit named Sentain (Gregoire Colin) arrives. Told through narration, Galoup’s words rarely make sense of anything but add to the growing tension that he carries through every moment. This disruption shakes his existence to the core and causes a rift between him and superior officer Forestier (Michel Subor) who takes a liking to the promising young man. Anger and jealousy spring forth with a destructive desire to break the confident soldier who can’t leave Galoup’s gaze. Naturally, Sentain pushes through the agonizing training drills easily winning the attention of the other men. However, when the recruit offers relief to a punished soldier Galoup sees the opportunity to show his dominance with a satisfying slap to the face. Sentain answers in kind forcing a deadly punishment upon himself.

Beau Travail is set in Djibouti East Africa which provides an eerily desolate yet beautifully dynamic landscape to portray Denis’ operatic meditation on identity. This juxtaposition mirrors the lives of the French soldiers living in a land in which they do not belong. Denis’ strikes a dissonance in the images used here but layers them to create beautiful displays that harmonize grandly. Chiseled bodies in an alien landscape perform the choreography of Galoup’s relentless training exercises are set against the swells of Benjamin Britten’s operatic flourishes.

An indelible image from Beau Travail is of the soldiers ironing their uniforms. In the light of day wearing only their underclothes, the Legionnaires painstakingly iron each article completely. This moment illustrates an undermining of the masculinity of the soldiers after we’ve seen them diligently train and engage their bodies in vigorous calisthenics. The amount of time spent showing the laundry duties of the men is quite unsettling, to be honest. “Perfect creases are part of this elegance” Fostier declares quietly as the soldiers refine their ironing techniques in the hot Djibouti sun. That night the effort for that elegance is on display at local nightclubs where the men dance with women and scour the town for a good time.

As the story goes Denis’ was approached by producers of the film to develop around the theme of “foreignness”. She was instantly drawn to the Legionnaires. Relying on a minimal narrative structure Denis’ leans on the powerful performances of the actors to embody the disconnect these soldiers and their outpost represent. Denis Lavant’s performance as Galoup is career-defining. From the caged hostility, he exhibits at the outpost to the film’s final nightclub scene the actor is utterly mesmerizing to watch. The supporting cast is phenomenal, to say the least. Their performances are subtle, nuanced, and bounding with explosive energy.

It's unfortunate that the film hasn’t received a proper North American release until now. Film students and physical media collectors have found solace in bootleg copies and ridiculous price gouging on Region Free copies. My first viewing was on a beat-up VHS tape found lodged in the Gay/Lesbian section of an Australian videostore. While the film contains enough subtext and surface material to categorize it this way I’ve found that Beau Travail is more than just a homoerotic masterpiece, but rather an exploration of the deeper themes of self-identity within the rigid framework of deeply cemented values and expectations.

Beau Travail arrives on Blu-ray thanks to The Criterion Collection. The BD-50 Region A disc is housed in a typical Criterion-style transparent case with a fold-out leaflet with an essay from Girish Shambu. The Disc loads to the Main Menu screen with scenes from the film playing behind Criterion’s slider-style menu. 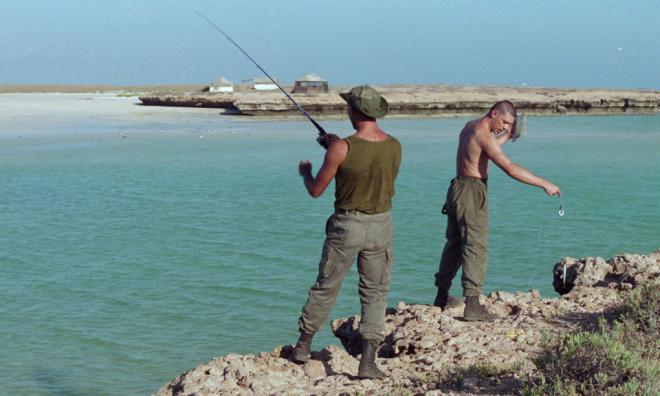 Beau Travail arrives on HD with a new 4k restoration that is absolutely gorgeous. In the original 1.67:1, this AVC encoded 1080p image beams with light. Blue ocean waves sing as loud as the music accompanying the images. Grain levels are solid allowing the texture of the image to breathe just enough without seeming too thick or busy. Primaries are bold and brash from the clothing on the townspeople to the blue-green waters surrounding the training compound. Plenty of fine detail evident on faces and costuming. Facial features contain lines and details along with individual stitching on the uniforms. Some limited noise in the image during the nightclub scenes is evident but doesn’t detract from the experience. Underwater scenes present heavy noise and grain due to the technical limitations at the time. These moments also provide the height of cinematic realism: dirt on the lens.

Those with previous home video releases should ditch them for this Region A Blu-ray from Criterion. The level of clarity and depth in the image is astounding. Textures within the arid desert sand, patterns on the women’s fabric rugs, and the sheer balance of light and shadow elevate the visual tone of the film beyond its previous home video releases. 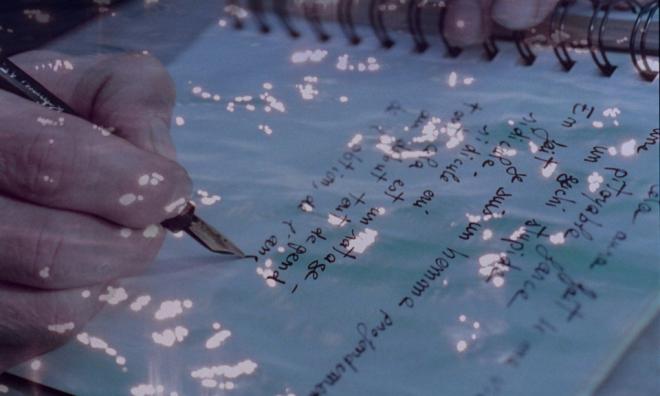 We’re given only a single audio track here with a French LPCM 2.0 that builds within the texture nicely allowing dialogue and music to coexist nicely. The music from Britten’s opera swells across the sound field enveloping the viewer drawing you into the heights of tension and obsession between Sentain and Galoup. Dialogue is clear without hiss or pop evident. This is a very lean audio mix that works well when it is required to support the story. 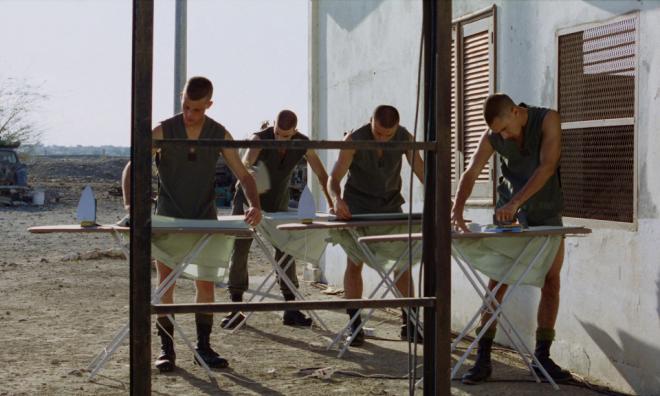 Beau Travail has lingered for so long without a proper release that it's great to see Criterion create some fascinating featurettes even with the complications of our current reality. A commentary track would be stellar but I’m not gonna nitpick this one. My advice is to start with the Barry Jenkins interview then follow it up with the Judith Myne visual essay before rewatching the film for good measure. 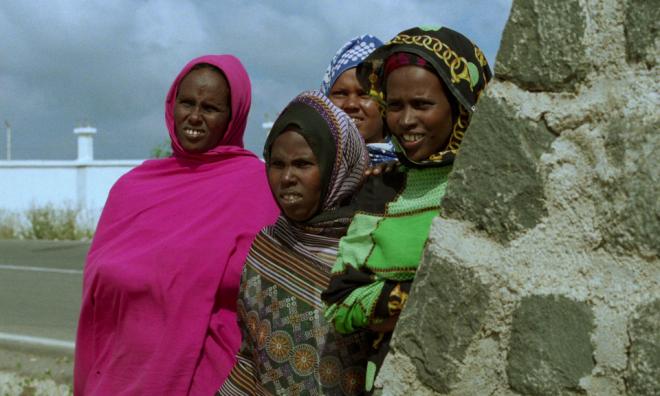 There are few times that Criterion genuinely surprises me with a title on their release calendar. I was thrilled to see Claire Denis’ Beau Travail receive some attention and fill a cinematic blindspot for collectors. I can’t be more excited for new audiences to experience it. The Criterion Collection has provided an impressive 4k restoration for the film and a legion of special features sure to please fans of the film. Highly Recommended.