Rutger Hauer's classic dystopian science fiction classic - no not Blade Runner - Split Second finally makes it's Blu-ray debut in the U.S. thanks to MVD as part of their ever-growing Rewind Collection. The film may not make a whole heck of a lot of sense with Hauer chewing the scenery as a burnt-out cop in London hunting a monster serial killer. MVD delivers a Blu-ray with a decent if unremarkable transfer, a strong audio mix, and a killer bonus feature package. Fans of this 90s rental classic will feel right at home - Recommended.

"You'd be paranoid too if you had a dipshit like this following you!"

London is flooded from global warming. The sun is obscured by a permanent cloud of smog. Burnt out and on suspension, Detective Stone (Rutger Hauer) is determined to find the killer of his partner. When the killer starts leaving a trail of bodies with their hearts ripped out, Stone is back on active duty with a hot-shot Oxford-educated partner Dick Durkin (Alastair Duncan) to keep tabs on him. As the pair get closer and closer to their target, they'll soon find out the killer is a monster more lethal than anything they've ever encountered - and they'll need some really big guns to finish the job! 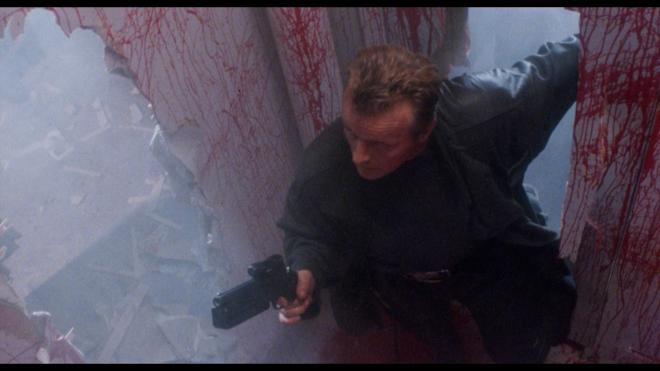 What the hell is Split Second? It's it an eco-horror/sci-fi movie? Is it a monster movie? Is it a serial killer thriller? Is it a buddy cop movie? Well - it's all of the above at the same time and not always in proportions that make any narrative sense. It's a genuine artifact of 90s high-concept moviemaking. But, that's okay because this video rental store gem is a hell of a lot of fun! I have great memories of watching this with my Dad. We'd seen the trailers and posters at our local mall multiplex theater with prominent "Coming Soon" signage. Well, it never came - at least not to our theater anyway. We wanted to see it because earlier that winter my Dad showed me Blade Runner for the first time so we kinda got looped into Rutger Hauer kick snapping up some of his best hits. Thankfully our local video store got Split Second on tape and we devoured that thing. I honestly don't know why we never bought it for how much we spent renting it.

The film may not make sense, but I love the mood and atmosphere. It's one of those films that feels like it should have a smell. With the waterlogged London locations, I imagine it smells like old wet socks and sausage. I love how the plot really doesn't make much sense, but that doesn't slow down the cast from delivering memorable characters and Director Tony Maylam from keeping the energy moving all the way through to the ridiculous over-the-top action-movie ending. As Simon Pegg once said about another 90s gem, "I won't argue that it was a no-holds-barred adrenaline-fueled thrill-ride, but there's no way that you could perpetrate that amount of carnage and mayhem and not incur a considerable amount of paperwork."

Through it all Rutger Hauer gives it his all. The man sure can sell "burnt out." I've never known him to be a method actor but his brand of sleep-deprived chocolate-fueled crazy sure looks genuine! If there was ever a spokesman for leather dusters, sunglasses, and really big guns - his Harley Stone is the spokesman! This is one of my favorite scenes in the movie when Stone and Dick need to arm up to take on the creature where the movie really leans into the buddy cop comedy:

As he owns every scene the rest of the cast pretty much has to play catchup at all times. You have to give credit to Alastair Duncan for managing to have any kind of screen presence when Hauer is going full-tilt-boogie at all times. Kim Cattrall is fine here as the love interest. She doesn't get a whole lot to do beyond stand in peril and look pretty but during the finale, she's working well beyond the cliché damsel in distress. That said it's funny to see her rocking her Star Trek VI: The Undiscovered County hairstyle.

This is one of those movies where you're 100% on board with it from frame one - or you're not. As a fan I get that it isn't the best movie out there, but even with my enthusiasm, I haven't been able to win over many converts. A fair bit of college was spent showing friends my rare OOP DVD hoping that it'd be a great midnight movie for everyone - but few turned to it. Too many were trying to "figure it out" - it's a movie you just need to experience and go along with the ride. Don't think - have fun! The final creature battle alone is worth the price of admission. I've enjoyed this movie going on 28 years now - gotta figure in the next 28 I'll still enjoy it!

Split Second finally arrives on Blu-ray stateside thanks to the great team at MVD as a part of their MVD Rewind Collection with spine number 24. Pressed on a Region Free BD-50 disc, the disc is housed in a sturdy case with reversible insert art featuring the film's iconic poster art as well as newly commissioned art - the cardboard slip features the new art. The disc loads to an animated main menu with traditional navigation options. Also included is a mini poster.

To be upfront, this transfer of Split Second probably isn't the miracle fans were hoping for. This movie has never looked great on home video, and while this is an improvement over the long out of print DVD and LaserDisc releases, it's not exactly sparkling either. Billed as a new 4K scan and restoration of the internegative - it's a serviceable presentation. I've avoided importing this over the years because of lackluster transfers and it seems this film just is an ugly little gem that can't be polished.

But let's talk positives first before we get into the negatives. Details are pretty impressive - better than I've seen for this film over the years anyway. Facial features, clothing, the film's impressive production design work, and the awesome creature - what you see of it - look great. There are some sequences with terrific grain structure and presence giving the image some appreciable depth and dimension for a welcome film-like appearance. The opening fetish club and when Stone and Michell are in his apartment look quite good. The final battle is also nicely captured allowing for some deep moody shadows and decent black levels. 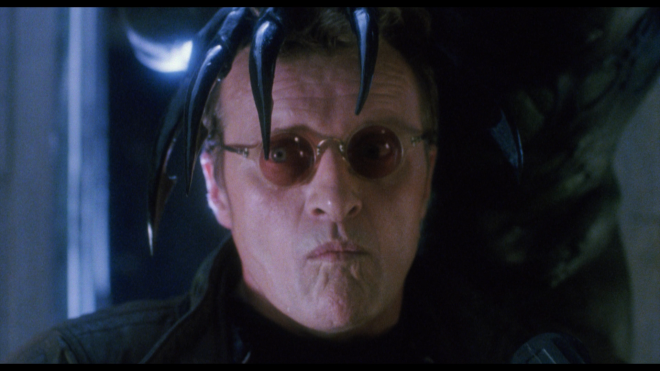 On the minus side of things - the image can appear quite bright with notable white blooms, almost bleached making colors look far too pale - crimson blood can almost appear pink in a few scenes instead of deep red. However dark scenes do have appropriate black levels and welcome shadow gradience. There are a number of sequences where film grain almost looks pixelated and crunchy - but in the previous video releases I've seen those moments always looked oddly out of focus - so this could just be a cooked in issue. Source elements are in decent enough shape - but there is some speckling, small scratches, and I even spotted what looks like a cigarette burn mark for a reel change at about the 29-minute marker.

Like I said - positives and negatives. While I hoped for a slick and beautiful new presentation, there is a part of me that's almost glad it still looks a little rough around the edges. There's a grungy and grimy vibe to the film so a less-than-stellar transfer almost adds to the charm in a way. Fans are only going to get so much mileage with this one unfortunately as a take what you can get scenario.

On the plus side, Split Second does have an aggressive LPCM 2.0 Stereo track to rock out to. Free of hiss or pops, the mix is well balanced allowing for dialog to come through without issue and the aggressive score from Stephen Parsons & Francis Haines to saturate the mix during the big action beats. Sound effects are well placed and atmospherics are nicely captured. The waterlogged London streets and the tire-spray anytime anyone drives ensure there's constant activity. Gunshots have that howitzer quality of a late 80s early 90s action movie with each concussive gunshot providing some welcome LFE. A surround mix would have been cool but since this is a video store gem, I'm glad to have a good old fashioned stereo track!

In true MVD Rewind fashion, this is the motherload of bonus features. On top of a new audio commentary, you get the extended Japanese Cut of the film which runs about four minutes longer as well as a ton of retrospective bonus features with cast and crew interviews as well as a few original promotional and EPK segments. There's a lot of great stuff to pick through. I've wanted to see the Japanese Cut for some time - it's not drastically different but cool nonetheless. If you're a fan of the movie you'll appreciate picking through all of these. The interview with Laura Gregory and Alastair Duncan is pretty great - especially when they discuss the film's premiere during the L.A. riots.

Split Second may not make it to the AFI Top 100 list - but it's a video store classic in my book. It's one of those movies I loved from when I was a kid that thankfully still holds up through the fog of nostalgia. Rutger Hauer owns this swampy creature feature sci-fi horror show. After years of delicately watching my old DVD or LaserDisc lest it gets scratched, Split Second is finally on Blu-ray in the U.S. thanks to MVD and their Rewind Collection. While the new transfer may not be as great as fans hoped for, It's still pretty decent and easily orbits any previous home video release stateside. Plus the uncompressed LPCM audio mix really kicks where it counts. On top of that - fans have hours of bonus features to pick through including a commentary track, the Japanese Cut, and a slew of new and archival extra features. Recommended.