WWII was ripe material for an exciting spy-fueled impossible mission. In the grand tradition of Alistair MacLean's impossible missions, Raid on Rommel from director Henry Hathaway starring Richard Burton and Wolfgang Preiss delivers the action and adventure, but a miss-matched tone thwarts an otherwise terrific mission. It's far from perfect but still manages to be entertaining. Kino Lorber Studio Classics delivers a worthwhile Blu-ray with a solid A/V presentation and a fine set of bonus features. Worth A Look

WWII was a battle of inches on a map. Small victories could lead to big gains. The destruction of a fuel depot in the African desert means a stranded division of Rommel's tanks. Ace special ops man Foster (Richard Burton) is sent deep behind enemy lines in Africa. His mission - free a group of English POWs and destroy a secret fuel depot for Rommel's tanks somewhere near Tobruk. With any perfectly-planned mission, there are a few bumps in the road - and Rommel (Wolfgang Preiss) is the least of Foster's worries when he has to turn a medics into a brigade of commandos. 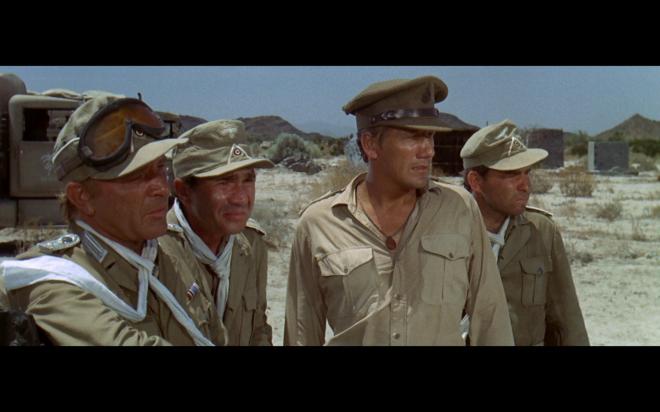 You gotta appreciate a fun World War II combat movie - even when it's not actually based 100% on fact. Enough of the missions that were pulled off during the war are so mind-bogglingly impossible it's amazing any of them actually happened. It's why so many spy films or impossible mission movies about the war are so great. Alistair MacLean made an entire career writing exciting novels and subsequent screenplays for their movie adaptations. The Guns of Navarone, Where Eagles Dare, Force 10 from Navarone - all of these are great examples of the author's ability to set a thrilling stage of impossible feats conquered by a few hand-picked men deep behind enemy lines. His work inspired a number of clones, some great - others only modestly so.

Raid on Rommel is one of those modest clones. It has all of the hallmarks of a MacLean story - semi-based in reality, an incredible mission against impossible odds, a ragtag group of men with specific skill sets - but it doesn't quite stick the landing. Even with Richard Burton essentially playing another version of Major Smith from Where Eagle's Dare as a surly commanding officer with a job to do even when the odds are stacked against him. Where Raid on Rommel falters isn't with the action and adventure - there's plenty of that to spare and it's great. The problem is tone, it's all over the map.

Henry Hathaway can manage comedy, he can manage romance, he can manage action and adventure - and in other movies, he can do them all at the same time. Here, the elements just aren't coming together. Parts work well - and then parts don't. And it's this up and down that throws off the mojo. When suspense should be building or you're supposed to be experiencing an exciting action sequence some kind of interlude will crop up for a joke or poignant random callback to dialog in voice-over will throw it off. This isn't to say the film isn't enjoyable or a waste of time, it's still worth going through - but there are better entries in this WWII sub-genre.

Raid on Rommel invades Blu-ray courtesy of Kino Lorber Studio Classics. Pressed on a Region A BD-50 disc, the disc is housed in a standard sturdy case. The disc loads to a static image main menu with traditional navigation options.

Another member of Universal Studios' deep catalog, Raid on Rommel doesn't appear to have undergone any kind of recent restoration or remastering, but that doesn't mean this transfer is in bad shape. Void of any hallmarks of edge enhancement or DNR, the 2.35:1 image offers plenty of robust detail with a natural grain presence. Details and grain can fluctuate a bit in thickness and intensity surrounding optical effects and scene transitions but those are cooked in artifacts that can't be helped. Colors are prominent offering some nice primaries - yellow being a particularly dominant shade. Skin tones are healthy and accurate. Whites are crisp with black levels approaching that deep inky color we look for. There are a couple of day-for-night shots that don't quite cut and black levels are pretty damn harsh without much detail, but again that's a cooked in issue. Some speckling and slight scratches here and there are the worst of any age-related issues to the source elements.

Any WWII movie needs to have a good audio source and Raid on Rommel delivers with a strong DTS-HD MA 2.0 track. Obviously a full 5.1 mix would have been great but this mission is an overall success with some welcome imaging for big action beats. The majority of the movie is dialogue-heavy with British soldiers speaking in low hushed whispers while the Germans can be a bit garish and cartoonish with their flamboyance - but the mix handles the vocal ranges nicely without the need to adjust levels. Scoring is on point and sound effects really open up during the big climactic action beats. Those explosions and gunfire really rattle and kick in some extra LFE in the right moments.

As with many KLSC releases, bonus features aren't the most robust, but they at least bring something worthwhile to the show. The audio commentary with Steve Mitchell and Jay Rubin is well worth a listen and the new interview with Clinton Greyn - while short - offers some nice bits about the making of the film.

Raid on Rommel may not be The Guns of Navarone but veteran director Henry Hathaway - who delivered some of the best westerns and action films in his prime - turns out a solid WWII action-adventure flick. It's not the greatest in the impossible mission sub-genre but it's pretty good. The game and willing cast win the day and the final action scenes save the show - but a more consistent tone could have done wonders here. All in all a fun show. Kino Lorber Studio Classics delivers a welcome Blu-ray release with a solid A/V presentation and a few worthwhile bonus features. If you're a fan, it's a fun one for the collection. If you're new the movie, it's at the very least Worth A Look.