From Horton Foote, Bruce Beresford's Tender Mercies is a meditative character study that still delivers an emotional impact and features an Oscar-winning performance by Robert Duvall. Kino Lorber brings the drama to Blu-ray with excellent audio and video presentation but a disappointingly small set of bonuses. Still, the overall package is Recommended. 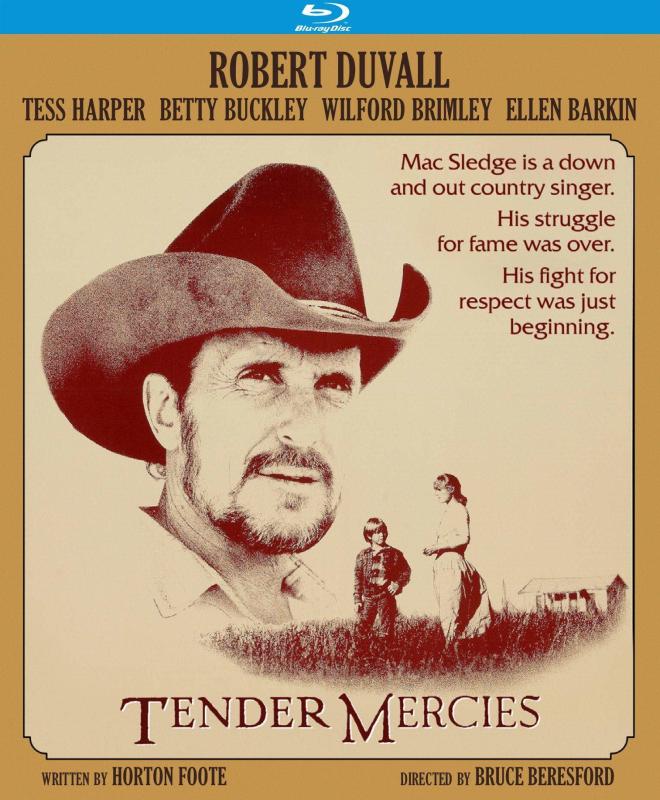 A quiet, meditative character study about the solitary path to recovery and redemption, Tender Mercies is a deliberately measured, stoical drama that dawdles along from one seemingly apathetic moment to the next. Much like the story's central protagonist, the film haphazardly kicks rocks while leisurely walking down a lonely dirt road as if without purpose or reason — an aimless stroll without an intended destination and unsure of exactly where it wants to end. From Pulitzer Prize-winning playwright and Academy Award-winner Horton Foote, the script's unhurried, methodical pace is precisely the point, a series of vignettes in a person's life seeking to atone for their past transgressions but uncertain of how to accomplish that or if there is a specific end goal in mind. In the tradition of the Southern Gothic, Foote's story waywardly unfolds and culminates in an emotional conclusion that lingers long after.

The film opens with the angry, unintelligible shouts and brawl of two men inside the room of a roadside motel & gas station. The owner and her son curiously listen from a distance but ultimately, walk away not wanting to intervene or be involved. The next morning, we find Robert Duvall's Mac Sledge waking from a drunken stupor, surrounded by the wreckage of the previous night's debauchery. It's a simple visual metaphor for the aftermath of Mac's alcoholism and disregard for those close enough to be harmed by his addiction. When apologizing to widowed motel owner Rosa Lee (Tess Harper) and offering to work for her in exchange for the damage he caused, it's clear the once-famous and renowned country singer has hit rock bottom. The exchange is awkward and embarrassing, especially for someone who had it all at one point in their life but is now asking for help from a complete stranger.

It's a quietly subtle moment that becomes emblematic for the rest of the film. To all appearances, the conversations appear random and futile, yet we can't shake this feeling they are nonetheless meaningful to Mac, gaining out sympathies and curiosity to watch his journey at becoming a better person. Stories about addiction are often conventional tales about the habit itself with shocking scenes of characters satisfying their cravings while struggling to escape the hell of their disease. But Foote has us look at what happens after the person has escaped that hell, that part of the struggle is also staying sober and working at rebuilding a new life. For Mac, this means marrying Rosa Lee, being a good parent to her son Sonny (Allan Hubbard) and preferring to being largely forgotten. However, his former life and fame continue to haunt him, bringing a set of unforeseen challenges to his newfound liberation.

Australian director Bruce Beresford (Breaker Morant, Driving Miss Daisy) jumps from one scene and conversation to another without an end or beginning, plodding along at a pace that leaves audiences contemplating the point of it all. This complements how Mac feels when visited by nearby fan Robert (Lenny Von Dohlen), leader of a local country-western band wanting to see him back on stage, but Mac fails to see the point. Things are further complicated after seeing his ex-wife Dixie (Betty Buckley), briefly reuniting with his estranged daughter Sue Anne (Ellen Barkin) and attempting to sell new songs to his old friend and Dixie's manager Harry (Wilford Brimley). However, Beresford masterfully ties everything together for an unexpectedly captivating and beautifully satisfying conclusion that seems to come out of nowhere, revealing that even a leisurely walk can steer you to exactly where you need to be.

Kino Lorber and StudioCanal bring Bruce Beresford's Tender Mercies to Blu-ray on a Region A locked, BD50 disc inside the standard blue keepcase and reversible cover art. At startup, viewers are taken directly to a static main menu with music playing in the background. 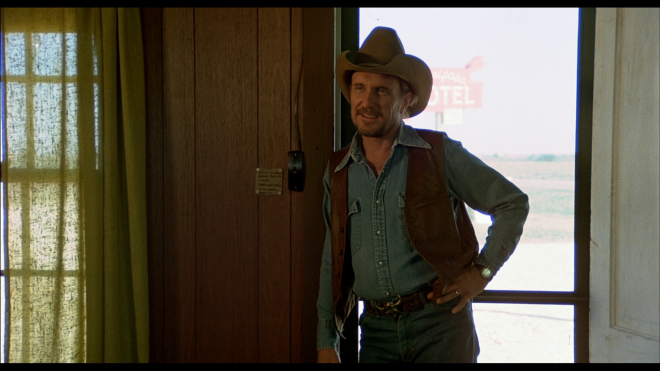 Redemption slowly creeps its way on Blu-ray with a lovely 1080p/AVC MPEG-4 encode, boasting lots of sharp detailing in the costumes, buildings and surrounding foliage. The hair and small whiskers are distinct, the grain and minor imperfections in the woodwork of the rundown motel are very well-defined, and the various objects decorating the home are plainly visible throughout. The video displays excellent contrast and brightness balance, showing brilliantly crisp whites and dark, inky blacks while maintaining outstanding shadow details, providing the 1.85:1 image with appreciable depth and fidelity. The freshly-remastered transfer also comes with a bold, vibrant selection of colors, bathing the drama in beautiful earthy browns, sandy tans, golden yellows and sepia tones. Although largely favoring secondary hues, the palette occasionally comes with sudden bursts of richly-saturated reds and energetic blues. Awash in a very fine layer of natural grain, the HD presentation of a forgotten gem makes for a gracefully winning comeback on Blu-ray. (Video Rating: 82/100) 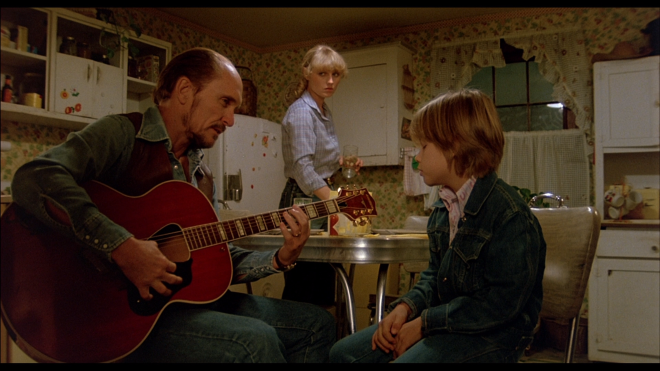 The soulful, meditative film returns to the stage with a strong and ultimately satisfying DTS-HD Master Audio 2.0 audio soundtrack. Honestly, it's a rather unremarkable and not particularly memorable track. Then again, being a character-centric, dialogue-driven film, it shouldn't come as much of a surprise all the focus is on the vocals, which are precise and distinct with excellent intonation in each of the performances. The music also plays a significant role in the story, and the mid-range exhibits notable definition and separation in every song, maintaining first-rate clarity and definition in each pluck and strum of the guitar. Subtle atmospherics are also clear in the background and do well in slightly widening the soundstage, making for an enjoyable and engaging soundstage. (Audio Rating: 68/100) 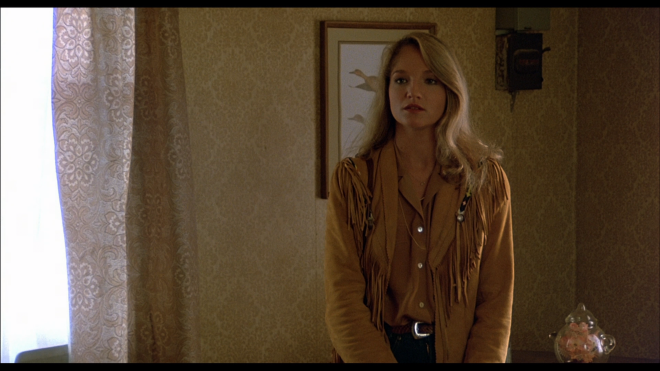 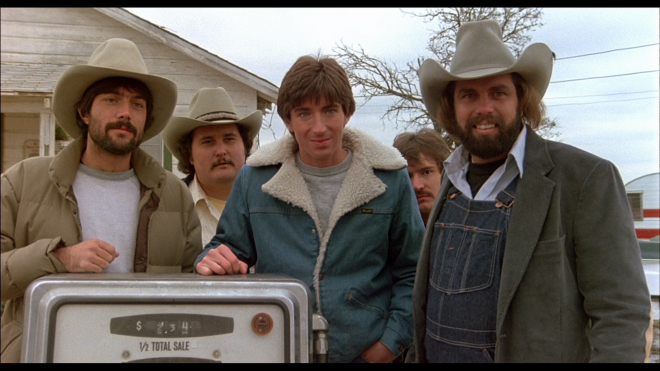