Decorated war hero-turned actor Audie Murphy made a name for himself as a star of westerns playing cool-as-ice gunslingers. Kino Lorber Studio Classics delivers the three-film Audie Murphy Collection to Blu-ray packed with three of the best efforts from the actor. The Duel at Silver Creek, Ride a Crooked Trail, and No Name on the Bullet play to simple genre conventions while allowing Murphy to convincingly play the tough guy with an honest streak. He may not have been the best actor, but he gave it his all and these are essential films in his catalog. With decent video and audio with each movie getting an informative audio commentary - if you're an Audie Murphy fan it's a worthwhile collection and if you're a western fan, it's still well worth taking a look at. Recommended.

After a magazine article detailing his impressive battle exploits and decorations during World War II -- seriously look up his war record! -- Audie Murphy was pulled into the orbit of Hollywood. Success didn't happen overnight, but with some training and hard work, the war hero became a staple of action-packed westerns. While not all of his films were the best, a lot of them were little better than B-movies with budgets, he carved out a respectable career. With all of the western stars of the era, John Wayne, Randolph Scott, James Stewart, Murphy enjoyed modest success and the three films in this collection prove he could hold the screen. The Duel at Silver Creek, Ride a Crooked Trail, and No Name on the Bullet are easily three of his best. 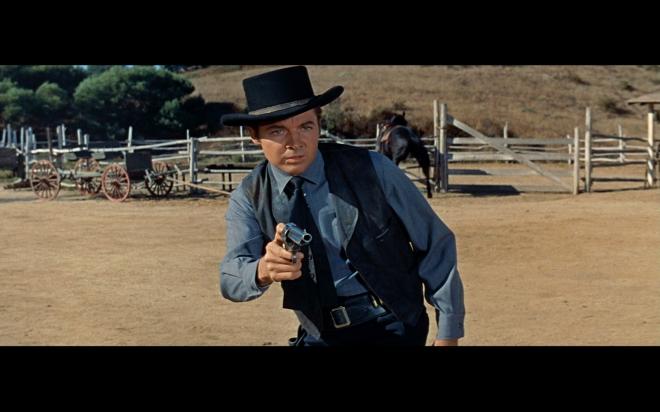 The Duel at Silver Creek

When a gang of claim jumpers kills his father, The Silver Kid (Audie Murphy) joins up with local quick-draw lawman Lightning (Stephen McNally). With the gang's plans stymied, they become desperate enlisting the help of Faith Domergue to seduce and ensnare Lightning pitting the two lawmen against each other.

Directed by Don Siegel, the film is a pretty simple and straight forward take on an old tale, but Siegel's penchant for action and deft suspense structure sets this one apart. Murphy may be the headliner but he's often second to Stephen McNally's Lightning who has lost the use of his legendary trigger finger - but has to keep his weakness a secret. The territory knows the sheriff is the fastest draw around - no one will challenge him. So the drama and suspense build from the gang potentially learning that secret culminating in one of the best quickdraw standoffs! Also - watch out for a baby-faced Lee Marvin in one of his earliest roles. It's not the best of the bunch but it's far from being a terrible movie. For entertainment's sake, it works.

Audie Murphy is Joe Maybe - an outlaw bank robber who through mistaken identity assumes the role of a famous U.S. Marshal. A perfect cover with the gruff and tough Judge Kyle (Walter Matthau) watching every move in town and quick with a shotgun. All Joe has to do is wait and find the right moment to take the bank. The only problem is when his old flame Tessa (Gia Scala) and his rival outlaw Teeler (Henry Silva) both show up with the same goal in mind.

Ride a Crooked Trail is a bit of a goof. While playing well with genre conventions it also amps up the comedy nicely without it becoming farcical. It's a serious western that doesn't take itself too seriously. A whole segment of Murphy's Joe Maybe recovering from a hangover with the room tipping and swaying a funny, but the payoff to the gag is what makes it stick. Add in a young Walter Matthau leaning into what would define his old curmudgeon character later in life gives this movie a bit of a buddy-cop feel as Murphy plays the straight man. Probably not the greatest movie ever made, but it wins in the entertainment department and there are some great action moments with Murphy clearly performing all of his stunts.

No Name on the Bullet

Audie Murphy is John Gant - a hired killer with a reputation that precedes him wherever he goes. Smart to force his target to draw first, Gant has yet to be charged with a crime as he can claim self-defense. So when Gant rides into Lordsburg, the town starts bustling - especially anyone with an enemies list. Local sawbones (Charles Drake) tries to figure out what the hell is going on as the town slowly tears itself apart. All Gant has to do is sit, watch, and wait to make his move.

This is probably Audie Murphy's best film. Granted, I haven't seen everything the man was in, but what I've seen this one is a genuine classic - not as a great turn for Murphy to own every scene, but just damn good filmmaking. Director Jack Arnold utilizes simple suspense-building techniques he put to use so effectively in Creature from the Black Lagoon, It Came From Outer Space and The Glass Web. Gant doesn't threaten anyone, he merely lets everyone's guilty conscience and paranoia work against them using their fear to suss out who Gant's actual target is. Simple and to the point, at 77-minutes it flies buy but nothing feels left unchecked.

I wouldn't call myself a big fan of Audie Murphy, I simply like the movies he's in. He's made some that were a little rough around the edges but you can see he always brought the best he could offer. He certainly had stage presence and enjoyed a long career before his untimely death, but he somehow managed to miss some iconic roles. There's a pretty long list of parts he was in contention for but lost out to other more famous actors. I would have loved to see what he could have brought to the screen as an older actor with a little more grizzle and grit that comes with an aged persona. Sadly we never got to see those movies.

What the Audie Murphy Collection represents are three of his best efforts - two of them genuinely terrific westerns that are often forgotten. I randomly watched No Name on the Bullet when I was in my teens while channel surfing and stopped on TCM because the name sounded badass. And the movie lived up to the title! I hadn't seen it in over 15 years so I'm glad that it held up to the rose-colored memories of that first viewing. Ride a Crooked Trail is a fun movie - nothing more or less. It doesn't reinvent the genre, it just plays with itself well and allows Murphy plenty of time to play with Walter Matthau. The Duel at Silver Creek is a true to form western, but it showed how good Murphy was in a supporting position. He can carry movies as a lead, but when he's not the main character he really gets to dig into the part and he was great in this one. All three films are fun watches. As all three movies are hardly four hours long in total, you can binge through them in an afternoon and enjoy the full run. If you're a fan of the man or love westerns, the Audie Murphy Collection gives you exactly what you need to be entertained.

The Audie Murphy Collection arrives on Blu-ray thanks to Kino Lorber Studio Classics in a three-disc set. Each film is given its own Region A BD-25 disc with its own sturdy Blu-ray case and artwork held together with a sleeve cover. Personally I like taking these out and putting them in my Westerns collection alphabetically - but to each their own. Each disc loads to a static image main menu with traditional navigation options.

As older members of Universal Studios back catalog, The Duel at Silver Creek, Ride a Crooked Trail, and No Name on the Bullet showcase dated video masters. I caught The Duel at Silver Creek a couple of years back on TCM and this looks to be the same master used for that HD broadcast. To say these movies could use some restoration work is redundant, but at the same time, they're not terrible. The worst thing that can be said about them is they suffer from age-related issues and older video encoding holdouts. Speckling and scratches are friends to each of these movies but don't distract. There is some mild edge enhancement here and there that can lead to some aliasing but nothing so serious to get worked up over. The trims around optical transitions look the roughest but that's a cooked in artifact that can't be helped. Each film displays a measure of appreciable film grain allowing for some nice fine details to come to the forefront. Nothing to call "wow" over but enough that if you had these on VHS or DVD the Blu-ray presentation would be a notable improvement. Image depth is appreciable throughout with fine black levels. Colors are big and bold allowing for rich primaries - particularly for No Name on the Bullet as the youngest of the three movies and shot in Cinemascope it's the best looking of the three films by far.

Similarly, each film is given a respectable DTS-HD MA 2.0 track. These won't redefine your home video viewing experience, but they're perfectly acceptable and stand up well. While dialogue and scoring work well for each film, it's the action sequences that have punch and flair. The shoutouts in The Duel at Silver Creek and Ride a Crooked Trail are great auditory moments. The Bank heist in Crooked Trail is a great moment with gunfire coming from all over the place with people shouting and horses panicking and running/jumping all over. No Name on the Bullet is much more quiet and conversational letting the gunfire wait for a few key scenes instead of letting suspense and drama build from simple character conversations. Each film has a little background hiss but nothing terrible and no pops or drop-offs to register. Levels are spot-on for all three without the need to monitor your volume once the show starts.

Universally I give each film's audio mix a 3.5/5

Bonus features for this set may be a little slim, but I appreciate getting some interesting commentary tracks for these films. While the Steve Mitchel and Gary Gerani track fro No Name on the Bullet may be the more engaging, Tony Roan provides a great commentary for Duel at Silver Creek and Ride a Crooked Trail. There's some good material to glean out of these tracks. Roan especially provides a nice sense of appreciation for the films and their place in Murphy's career.

The Duel at Silver Creek

No Name on the Bullet

Audie Murphy came out of World War II one of the most highly decorated soldiers of the war. In Hollywood, he found success as an actor, but his films weren't always the most memorable compared to the competition. Every now and again he'd find himself leading a worthwhile venture. The Audie Murphy Collection from Kino Lorber Studio Classics gathers up three of the actor's better efforts. True to genre form they don't hold too many surprises but they're worth watching and will keep you entertained. Each film in this set enjoys a serviceable A/V presentation and a worthwhile audio commentary to bolster the bonus features. If you're a fan of Murphy's work or just enjoy a fun western, this collection is worth the time. Recommended.