From the director of Airplane! and Top Secret! comes Ghost - an endearing romantic thriller starring Patrick Swayze and Demi Moore. 30 years later the film still tugs at the strings thanks to Swayze's heartfelt performance and the great chemistry he shared with Moore and Oscar-winner Whoopi Goldberg. It's got thrills, romance, comedy - and it still holds up. Ghost gets a second life on Blu-ray as part of the Paramount Presents line featuring an excellent new video transfer with the same serviceable audio. Regardless, this is a great movie worth the upgrade. Recommended.

Sam Wheat (Patrick Swayze) is a man on the rise with everything going for him. A financial wizard in charge of accounts worth millions, he just renovated a massive loft apartment with his girlfriend Molly (Demi Moore). Everything is going right - until it goes very wrong. Murdered in an apparent mugging, Sam's soul is trapped on earth with unfinished business. As he pieces together the motive behind his murder, Sam turns to Oda Mae Brown (Whoopi Goldberg), a charlatan psychic who can actually hear him. 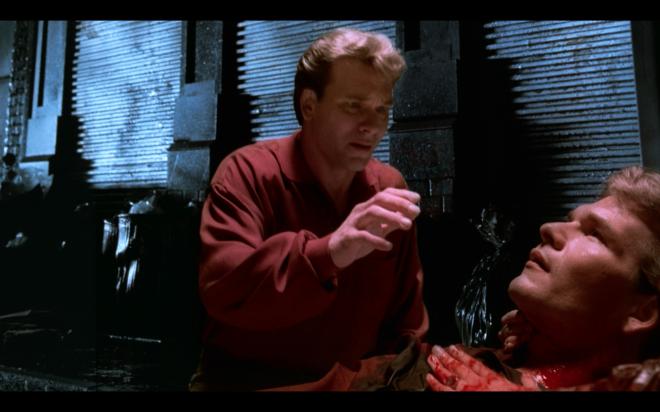 I was eight years old when I saw Ghost in theaters, and believe me, that was the last place I wanted to be. My older sister got to pick the movie so off we went with my mother. I may not have been the target demographic when I saw this, but I'd be lying if I said I didn't enjoy myself. It was more than a schmaltzy ghost romance. It had thriller elements to keep the excitement going. It had comedy thanks to a great turn from Whoopi Goldberg. It had horror elements as sam exacted revenge for his death. And it had a lot of heart. Having seen Witness several times by that point in my life and that Maurice Jarre score certainly tugged the heartstrings. I went into the theater a cynical little shit of a kid and came out begrudgingly admitting that I enjoyed myself.

My family had this on VHS and it'd be on from time to time, but when DVD hit I skipped it. When the Blu-ray dropped I rented it and hardly glanced through it. By my figure, it's been the better part of 20 years since I actually sat down and watched this movie from beginning to end and I'm actually rather glad to report it holds up. I get Jerry Zucker wanting to break out of his comedic comfort zone and try something different. Turns out the man had a knack for managing romance, suspense, drama, with a dash or two of comedy. I also appreciate that as an executive producer for The Naked Gun 2 1/2: The Smell of Fear he wasn't above parodying the infamous pottery foreplay scene.

What I really enjoy about Ghost is how well Bruce Joel Rubin's screenplay manages the disembodied spirit trope. Really if you get right down to the nuts and bolts of this movie, it's Always with a plot and a purpose and not a needless remake with a wasted cast. M*A*S*H even did a similar plot with a ghost running around the camp waving around the cast's faces shouting "why can't you see me!" - I hate that trope. Just about every medical drama show is required to try it - or a third-person documentary episode - and it's always lame. Here Swayze's Sam has a genuine reason for roaming around. He has actual unfinished business - like solving his own murder! 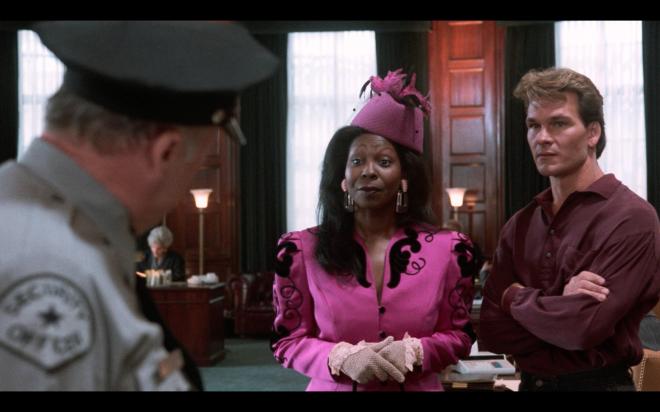 30 years on, Ghost may not be the best movie ever made, it's still a little clunky and relies on a lot of conveniences to propel the mystery angle along, but it's still a good movie. It's romantic without being schmaltzy. It's funny without letting the comedy overpower the show. It's suspenseful without being a run-of-the-mill revenge movie. Through it all the cast delivers. Whoopi Goldberg obviously stood out winning her Oscar, Demi Moore delivered one of her better 90s turns, while Patrick Swayze demonstrated his full range. Without hesitation, this is the best performance of his career. I love the man in Road House but let's be honest. If it's been a while since you last sat down to Ghost - give it another run. I'm willing to bet you'll be swept up into it in no time at all.

Ghost arrives on Blu-ray for the second time now as a member of the Paramount Presents line with spine number: 8. Pressed on a BD-50 disc, the disc is housed in a clear case with cardboard slipcover that opens up to reveal the classic original poster art. The disc loads to a static image main menu with traditional navigation options.

Going from the memory of a handful of partial viewings of the 2009 Blu-ray - this 1080p transfer from a new 4K restoration is a notable improvement. Similar to what I experienced with Pretty in Pink - the opening credits are a bit rough with really thick grain and soft details, but as soon as those credits end and the main show starts - this is a beauty. There isn't a 4K UHD digital stream available for comparison but this is damned impressive looking. Facial features, the late 80s styling, the New York locations - everything is on display. Oda May Brown's shop is a production design feast. Film grain is fine and well-resolved throughout giving a welcome film-like appearance. Colors are terrific with bold primaries - blues and reds are a notable standout with skin tones looking healthy. Free of any age-related issues or speckling, this is a clean presentation. We've said it before and I'll say it again here, I wish these Paramount Presents titles would get true 4K UHD Blu-ray releases, but this new Blu-ray transfer is impressive.

From my understanding, Paramount simply reused the same okay-ish Dolby TrueHD 5.1 audio mix for this new release of Ghost. And, that's fine… it's fine. It gets the job done - but it doesn't really shine. Dialog is clear throughout most of the movie, there are a couple of places where things get a little muddy but it's not terrible. Surrounds are active but not really present in a distinct way. They feel more like an all-channel stereo track where the sound is just stretched about instead of any dynamic object placement. Thankfully when the Righteous Brothers' Unchained Melody kicks in it sounds fantastic fully taking over the scene.

Again, as with so many of these Paramount Presents titles - bonus features are a bit of a drag offering only one itty-bitty interview with Jerry Zucker that feels like it was chopped out of a much longer and more interesting interview. Everything else is port-overs from previous releases.

I guess when a film holds up for 30 years it does start to earn that distinction "timeless" - but it feels weird to say that since I was a kid when I saw Ghost in theaters. It's a heartfelt supernatural romance featuring some iconic moments with stars Patrick Swayze and Demi Moore. It's a hell of a movie that works for a great night in with your significant other. Paramount gives Ghost a second life on Blu-ray as a part of the Paramount Presents line with a new disc sporting a brand new transfer sourced from a new 4K restoration. Audio and bonus features don't offer much of an upgrade. If new and improved picture quality doesn't matter to you, there's nothing much new to this set to warrant the double-dip. However, if you haven't bought this film yet - this is a terrific release and worth having on your shelf. Recommended.