Jean Renoir’s groundbreaking 1935 film Toni focuses on the lives of immigrant laborers as they search for work, love, and prosperity in the south of France. Newly arrived Antonio becomes involved in a love triangle as he struggles to carve out a life and a future after leaving home. Eschewing established techniques Renoir opted to realize a raw and realistic style in this precursor to Italian Neo-Realism. The Criterion Collection brings Toni to Blu-ray with a new 4k digital restoration that looks very impressive. Paired with the original mono audio track and a slew of bonus features this release comes Recommended. 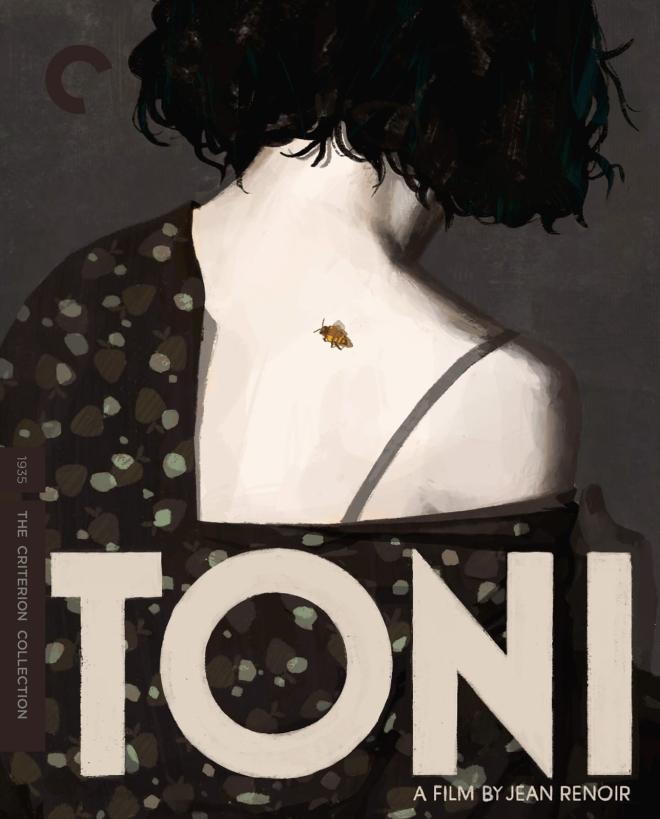 “I am a worker. My country is wherever I can earn enough to eat.”

Based on a true story about a crime of passion among immigrant workers in France, Toni centers around a love triangle between quarry laborer Toni, his girlfriend Marie, and flirty farmhand Josefa. As soon as we’re introduced to Toni asking for a room at Marie’s boarding house we cut to him waking up in her bed half asleep and arguing with her about their loveless relationship. “Life moves pretty fast” as Ferris Bueller would say but unfortunately Toni has eyes for the fiery Josefa. Toni finds work at the local quarry but uses his every waking moment in pursuit of his true love.

Albert the quarry foreman ultimately causes the unfolding drama in Toni. He represents the upper class with his suit jacket, fedora, and his loud motorcycle buzzing by the workers as they leave the job. Albert attempts to seduce Josefa but instead forces himself on her. When she refuses his advances Albert responds with “I love appetizers, but I’m used to getting the full meal.” He gets his way and soon they must marry each other. A heartbroken Toni eventually weds Marie and settles into an unpassionate life without his true love. Naturally, Albert becomes abusive and intends to steal the farm from Josefa’s family. In time Toni steps in to protect her from the raving madman she married with unexpected results.

According to Renoir, we are not separated by nationality but by the kind of work we perform. A humbling thought to say the least when seeing Toni arrive in France as the film opens with train cars full of laborers eager for work. Toni closes out with a similar shot of workers arriving. Unfortunately by the second time we see that train our expectations are quite different for those on board. The quote at the top summarizes the state of affairs for the characters whether they’re established like Josefa or still hungry for more like Toni.

Sound not only transformed Renoir’s career but also became an important element to his storytelling and filmmaking. Actors from the Mediterranean region with Corsican/French accents added a depth of realism plus he recorded sound on location rather than post-recording in a studio. Renoir’s devotion to the authenticity of dialect and sound made the production a difficult effort. Shooting outside Paris was also unheard of at the time adding higher stakes to the production. Seeing it today you’d never confuse it with documentary footage but with enough authentic pieces in play, Renoir crafted a genuine snapshot of real life.

The most famous scene from the film involves a wasp stinging Josefa as Toni helps her push a cart through the farmland. She recoils in pain and asks Toni to suck out the poison. Her pained expression turns as he tastes the forbidden fruit. Toni realizes his love for Josefa as he sucks out the poison. His procedural response changes to a lustful connection if but for a moment. The reaction on her face as his mouth touches her back is a delightful mix of pleasure and pain. Cast with local and semi-professional actors, Toni connected with audiences who spoke the Mediterranean languages and dialects heard in the film. Performances are engaging and memorable from Charles Blavette as Toni, Celia Montalvan as Josefa, and Jenny Helia as Marie.

Toni spends its time wisely focusing on the rural poor whose lives were unfolding just around the corner in affluent neighborhoods. Renoir grows the tension slowly between our characters which culminate in acts of sheer violence. Punctuating the emotional explosion are a series of close up shots that are in stark contrast to the naturalistic style carrying us along. It’s a startling and shocking moment, to say the least. While overshadowed by Renior’s later films there is no better time than now to rediscover these timeless themes.

Toni arrives on Blu-ray in a standard Criterion transparent case. An essay from Ginette Vincendeau and a piece by Renoir from a 1956 issue of Cahiers du Cinema can be found on a provided insert. The disc loads directly to the static Main Menu screen with typical navigation options in Criterion’s slider-style menu. 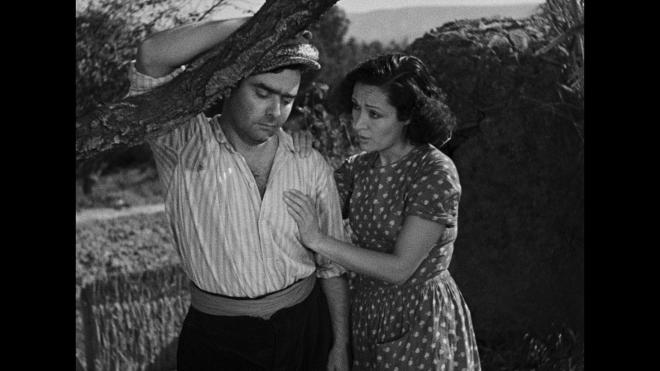 Toni makes the leap to HD thanks to a new 4k digital restoration presented here in 1080p with a 1.37:1 aspect ratio that looks very impressive. The image is mostly clean of dirt and debris, though some bits are pronounced at times. Contrast levels are solid giving the picture plenty of room to breathe between shadow and light. Grain levels look great allowing plenty of available detail to sing without drowning in it. Frame jumps occur frequently starting at the funeral sequence. Black levels are impressive here with a rich appearance allowing Renoir’s interior shots as well as his grandiose landscapes to have a robust depth. Grain texture is consistent throughout the feature. Clarity wanes from scene to scene but overall the presentation looks great with fine detail evident on costuming and interiors. Some outdoor scenes are blown out but still retain enough contrast and depth to be readable.

Criterion’s 1.37:1 aspect ratio opens up the frame quite a bit revealing more information than the previous home video release. That particular PAL DVD from 2006 showed a tighter crop though the image quality at the time revealed an outstanding presentation. It’s a no-brainer for those looking to upgrade. 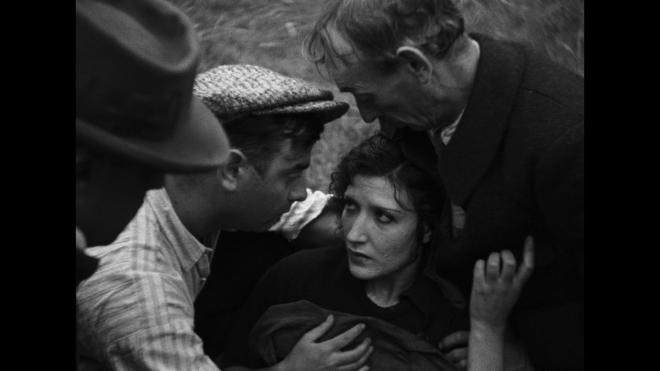 Toni arrives on Blu-ray with a 24-bit PCM mono audio track in the original French language. Renoir’s film is dialogue-driven with some guitar scoring elements throughout which are restored nicely for this release.  However, the antique audio recordings aren’t renewed without imperfections. Obvious pops occur between scene changes and some hiss is evident throughout. Dialogue and voices are clear enough to understand their inflections and tonal changes through the mono track. 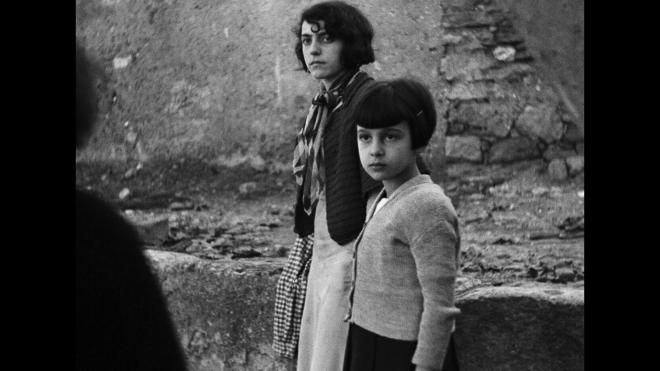 While not boasting a long list of features, Criterion has provided some long-form featurettes here that are essential for lovers of Toni. I recommend starting with the commentary track before moving onto the Cineastes de Notre Temps program. 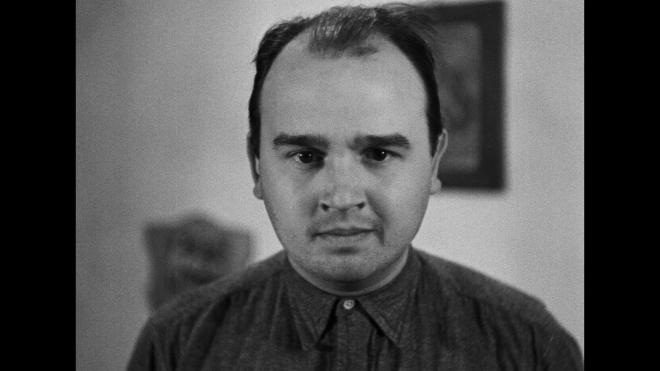 Toni may not be on the tongues of most audiences today but its creation took risks that inspired the New Wave and Neo-Realism films. Renoir's unglamorous tale of immigrant laborers traveling for work is as relevant then as it is today. Not to mention the trials of love, loss, and having your boss steal yo girl. The Criterion Collection has resurrected a hidden gem and provided a solid A/V presentation and enough bonus features to please any cinephile. Recommended.