Genre conventions have to start somewhere. The legends of the old west burst forth on the big screen deep within the silent era. Two men helped propagate the classic archetypes of the west - Harry Carey and John Ford. In Straight Shooting the pair craft a simple and straight-forward story of a hired gun with morals who finds himself fighting his old boss defending a patch of homesteaders. It's a great adventure with Carey's menacing stare and wry smile. Kino Lorber brings Straight Shooting to Blu-ray with a fresh new 4K restoration by Universal Pictures that dazzles. Complete with a simple by lively score by Michael Gatt, the set includes some terrific bonus features. If you love westerns, this is a historic piece of your collection. Highly Recommended.

Cheyenne Harry (Harry Carey) is as rough and hard living an outlaw as they come, willing to do anything if the price is right - well, almost anything. Harry is hired by his old friend Sweet Water Sims (George Berrell) to run off some homesteaders but when he finds the family standing over the grave of a young man who was killed by Sims' goons, Harry turns sides ready to fight Sims to the death if necessary to defend the innocent people. 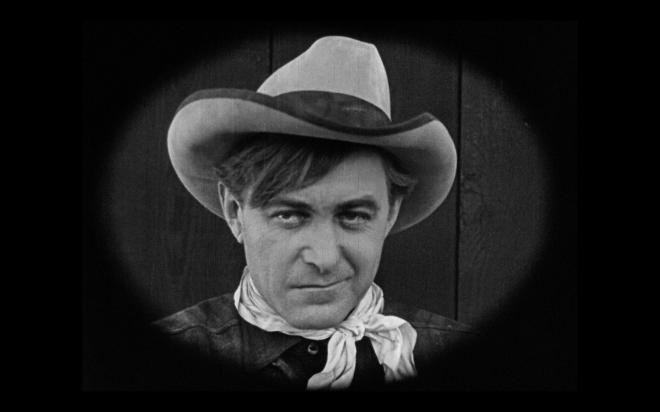 Straight Shooting is about as straight forward and conventional as a western can get. But those conventions had to start somewhere. Up until films became mainstream entertainment, kids read about cowboys and exciting shootouts and wild adventures in cheap pulp books and dime store novels. The lucky ones got to hear it straight from the horse's mouth.

When John Ford followed his brother to Hollywood into the movie business he established a successful working friendship with star Harry Carey making two dozen westerns in the span of four years. It was while making these films that Ford met legendary lawman Wyatt Earp and other old-timers of that era who called Los Angeles home. You don't craft a legend from fact. There are always dramatizations and exaggerations of real-life events. Ford supposedly got the straight dope on the famous O.K. Corral shooting direct from Earp - but when it came time for his own movie My Darling Clementine he felt the need to gussy it up. The legend is always more exciting. Cheyenne Harry is just the sort of legendary character one would expect to find in the old west. Ford's keen eye for the camera, staging, and natural ability to craft a tall tale is what made him one of the best Hollywood directors.

Straight Shooting works because it hits all of the genre targets we'd call conventional today. Harry Carey is larger than life. The first time we meet him he literally crawls out of the tree where the handbill with his warrant is pinned. He's fast on the draw but faster with a drink. Seemingly unscrupulous you expect him to be the villain but before long the cries and tears of the innocent warm his icy heart. Right down to winning the farmer's lovelorn daughter, this film checks off the boxes that would be trite if done today. One of my favorite running gags is whenever we meet George Berrell's Sims there's always a fly buzzing around him like he was a true ambulatory mound of shit. This story was thrilling and new when this film hit screening rooms in 1917. As were all of John Ford and Harry Carey's films.

Sadly, as with so many silent films of the era, most didn't survive. Ford would direct 39 films for Universal Pictures from 1917 to 1921, 25 of those films with Harry Carey. Today only three complete films remain with only fragments and snippets from 6 others have been identified. With less than 10 percent of his films surviving, it's a miracle that we even have Straight Shooting in a complete form to enjoy.

103 years later, watching it today one can see the influences in Ford's later films and the imitations from other lesser filmmakers. I've seen this film a handful of times now and it's always an entertaining adventure. I keep hoping someone will open up some random vault somewhere and find more of these forgotten treasures or maybe another patch of permafrost up in Dawson City will uncover another trove - but that hasn't happened yet. One can hope.

Kino Lorber Studio Classics delivers Straight Shooting to Blu-ray in a single region-A locked disc set. Also included is a booklet containing stills from the film as well as a wonderfully informative essay by Tag Gallagher. The disc loads to a static image main menu with traditional navigation options.

Restored by Universal Pictures from archival elements from the Library of Congress, Straight Shooting offers up a magnificent 1.33:1 1080p transfer. While this film isn't quite "complete" - there are apparently some segments and scenes still lost to time and unfortunate regional censor boards, its still coherent and any gaps aren't that distracting. As is the case with most silent films, there are jumps and skips here and there but nothing out of the ordinary. Some fine-line scratches and speckling remain. Title cards look to have been newly generated with a faked "old-time" filter to give the image some cohesion. Throughout the film detail levels are strong allowing for intricate facial features and the simple but effective set design to come through. Grayscale is strong throughout with some appreciable black levels and balanced whites. I'm most impressed with the stability of the image. Poor transfers of silent films often look like you've set a projector on a toddler's head and expect them to hold still for an hour. This is a very stable image without annoying frame judder.

Accompanying this presentation of Straight Shooting is a wonderfully lively score by Michael Gatt. Working a piano and guitar, this score sets the mood, adds tension and levity where necessary and fits beautifully with the film. What I love about its simplicity is that it isn't overdone. You didn't need a full orchestra to bring this to life, a simple set of one or two instruments like you would have heard 100 years ago is all that's needed.

While there may not be a lot here, what's here is quality stuff. The audio commentary featuring Joseph McBride is an engaging and informative listen. The video essay from Tag Gallagher is a lot of fun as it highlights all of the familiar setups and locations and direction John Ford brought to his films. If it worked once, why not a dozen more times just a little different? The fragment of Hitchin' Posts is pretty cool to see but this is sadly one of those incomplete gems that is forever lost.

If you've read any of my numerous other reviews for this website you know I'm a sucker for Westerns. They've been my cinematic bread and butter for as long as I can remember. This wasn't my first outing with John Ford's Straight Shooting - but this is easily the best condition release I've laid eyes on and it felt like I was seeing a lot of it for the first time. How he cut the film, how he framed his characters with geometric objects, you can see extensions of this throughout the rest of Ford's career. Considered conventional today, this was groundbreaking material in its day and we're lucky to have it.

Kino Lorber Studio Classics delivers an excellent Blu-ray release of Straight Shooting with a transfer sourced from a new restoration from Universal Pictures complete with a new score by Michael Gatt. Bonus features may not be plentiful but they're worth picking through. If you're a fan of the genre, this is Highly Recommended.