A rare silent film from director William Wyler that also contains a stellar performance from tragic Hollywood star James Murray, The Shakedown makes its Blu-ray bow after receiving an impressive 4K restoration from Universal Pictures. The story of a scam artist who tries to reform after gaining the love of a waitress and respect of an orphaned ragamuffin may be an uneven mix of comedy, drama, and action, but Wyler's artistry and Murray's authenticity make it worth watching. Very good transfers distinguish Kino's Blu-ray presentation of this early Wyler curio, which is definitely worth a look for classic movie fans.

Long before he won his three Oscars for Mrs. Miniver, The Best Years of Our Lives, and Ben-Hur, a young William Wyler directed The Shakedown, a minor yet intriguing silent/part-talkie starring one of Hollywood's most tragic casualties, James Murray. Though far from a masterpiece and not nearly as polished as Wyler's future productions, The Shakedown nevertheless brims with energy and features glimmers of the artistry that would soon define the director's work. Moments of charm and warmth abound in this lightweight tale about a con artist who seeks redemption, but a choppy script and dated humor dull the film's impact and lend it an uneven, unfocused feel.

Dave Roberts (Murray) is an essential cog in an elaborate boxing scam that moves from town to town preying on naive marks who bet on fixed fights. Dave takes a regular beating in the ring to earn his share of the spoils, but once he meets the adoring Marjorie (Barbara Kent), a fresh-faced waitress in a drab diner, and takes Clem (Jack Hanlon), an orphaned, delinquent ragamuffin, under his wing, he begins to reevaluate his crooked ways. As Dave tries to put the worshipping Clem on a straight and narrow path and instill in him forthright values, he realizes he needs to lead by example, but that means stranding up to the syndicate and risking personal ruin. Is Dave up to the task, or will he crumble under the pressure, revert to his wicked ways, and lose what he holds most dear?

Produced in 1929 just as sound was spreading like wildfire throughout the movie industry, The Shakedown was originally shot as a straight silent film, and it's that version that's received a new 4K restoration from Universal Pictures and resides on this Blu-ray disc. Yet once production wrapped, studio executives ordered the 26-year-old Wyler to retool a couple of scenes to include dialogue. The part-talkie edition of The Shakedown, which was widely exhibited in theaters, is now classified as a lost film, and the silent version, which was only recently rediscovered in a private collection, isn't complete. Sadly, the film's original title card and any mention of Wyler as director are gone, and at 65 minutes, the running time is five minutes shorter than what's listed on IMDb. I can't confirm whether the part-talkie version of The Shakedown ran five minutes longer than its silent counterpart, but we're lucky the film still exists in any form and now has been properly preserved. 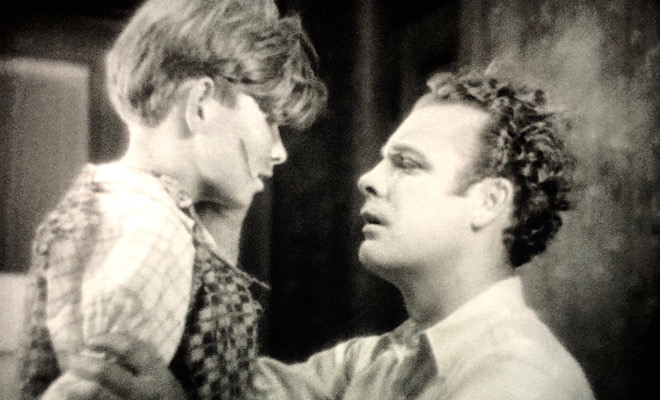 The Shakedown mixes broad comedy with moments of tender warmth as it marches toward a rough-and-tumble boxing finale that probably influenced a couple of future classic films. As we watch the freckle-faced Clem hang over the ropes and cheer Dave on in the ring as he labors in the fight of his life, it's tough not to draw parallels to little Jackie Cooper rooting for big, burly Wallace Beery in The Champ just two years later. And when Marjorie shows up halfway through the bout and watches from afar in a simple knit hat with fear and concern plastered across her face, she's close to the spitting image of Talia Shire's Adrian in the original Rocky. Unfortunately, The Shakedown pales when compared to both those films, despite Wyler's best intentions.

Wyler always puts character first, and nicely develops the relationships in the film. He also wrings fine performances from his actors. There's a heart-wrenching moment between Murray and Hanlon that almost compensates for Hanlon's incessant mugging and some lovely moments between Murray and Kent, who projects angelic radiance in a thankless part.

Visually, Wyler fashions some striking perspectives. He gets plenty of mileage from an ambitious shot of Murray being hoisted to the top of an oil rig by a crane, and later mounts his camera on a ferris wheel to capture Dave and Marjorie on the ride when they visit a local fair.

The disarmingly natural Murray, whose good looks and affable demeanor made him more relatable than the garden variety Hollywood glamor boy, shot to stardom the previous year playing the quintessential corporate everyman in King Vidor's haunting portrait of urban society The Crowd. Life in the fast lane, though, proved to be the actor's undoing. A drunk driving conviction a year after the release of The Shakedown led to a six-month prison sentence when Murray showed up drunk to a court hearing, and thereafter he was unable to stay sober long enough to reignite his film career. Murray ended up as a panhandler on skid row and eventually drowned in 1936 when he either fell or jumped off a New York pier while intoxicated. He was just 35 years old.

Watching The Shakedown today, it's hard to believe the strapping yet sensitive Murray could meet such a sad and depraved end. The movie's inspirational tone belies its star's tragic fate, but Murray's excellent work elevates a pedestrian story and infuses it with humor, heart, and plenty of soul. For Wyler, The Shakedown is notable only as the director's last silent film. The new era of talkies would open up Wyler's world and lead to the best years - and greatest successes - of this acclaimed director's life and career. 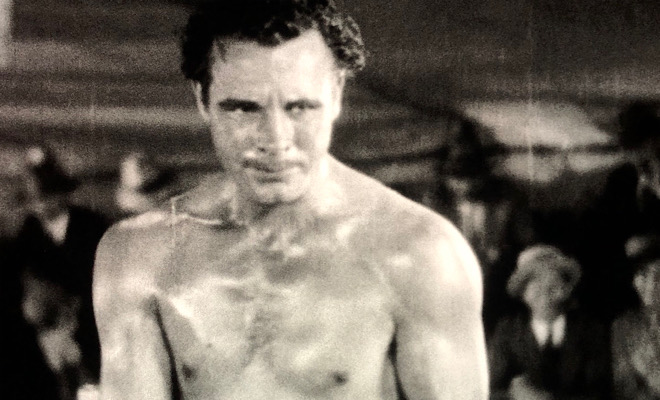 The Shakedown arrives on Blu-ray packaged in a standard case with reversible cover art. A 12-page booklet featuring an essay by Nora Fiore, a cast and crew listing, and a few small photos is tucked inside the front cover. Video codec is 1080p/AVC MPEG-4 and the new music score is presented in DTS-HD Master Audio 2.0 stereo. Once the disc is inserted into the player, the static menu with music immediately pops up; no previews or promos precede it.

A brand new 4K restoration from Universal Pictures produced from a 35 mm dupe negative brings The Shakedown into the 21st century. Though it's impossible to erase all the ravages of time from a 91-year-old movie that hasn't received the best of care over the years, the image on this 1080p/AVC MPEG-4 transfer looks quite good overall. A fair amount of vertical lines that vary in density and some speckling afflict the picture, and several missing frames produce some jarring jump cuts, but that's to be expected from a film of this vintage. Sadly, the movie's main title card no longer exists, so Wyler gets no screen credit. A manufactured card replaces it, but for some reason does not include any reference to Wyler.

Good clarity and contrast lend the movie a vibrant look, but fading and softness crop up here and there and long shots look pretty fuzzy most of the time. A consistent layer of grain maintains the feel of celluloid without overwhelming the image. Black levels are rich, whites tend to diffuse and bloom a bit, and nicely varied grays enhance depth. Several of the close-ups are lovely, but of course lack the usual high-def sharpness due to the movie's advanced age and level of deterioration.

It's amazing The Shakedown still exists at all, and this admirable restoration proves once again just how important film preservation is.

The DTS-HD Master Audio 2.0 stereo track lends a modern twist to this 1929 film. Excellent fidelity and tonal depth bring the new jazzy music score by Michael Gatt to life, while a wide dynamic scale embraces all of its highs and lows without a hint of distortion. Palpable stereo separation widens the soundscape and helps the music easily fill the room. There are no audio effects on the track.

Aside from the 12-page booklet, the only supplement is an audio commentary by film critic Nick Pinkerton. Pinkerton describes The Shakedown as both a boxing and grifter film with labor/industrial overtones, analyzes the plot, and provides brief career bios of many of the players. He also talks about Universal's uneasy transition to sound and the part-talkie version of The Shakedown, praises Wyler's direction, mentions possible cameos by Wyler and a very young John Huston, and discusses Murray's rise and tragic fall in a fair amount of depth. Pinkerton shares some quotes from Wyler and a couple of contemporary reviews in his informative and insightful commentary that's well worth a listen for fans of the silent and early sound era.

Though it doesn't rank among the upper echelon of silent movies, The Shakedown remains an interesting curio and fascinating example of the early work of director William Wyler. It also reminds us what a fine actor James Murray was and makes us rue his tragic decline and demise all the more. The story of a scam artist who seeks redemption after winning the love of a waitress and respect of an orphaned boy unevenly mixes comedy, drama, and action, but Wyler's often inventive direction and Murray's touching performance lend the film some gravitas. A brand new 4K restoration yields a pleasing transfer, while a new jazzy music score adds some contemporary flair to this 91-year-old antique. If you're a fan of silent films, you'll certainly want to add The Shakedown to your collection. For everyone else, it's definitely worth a look.