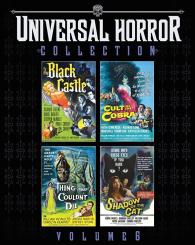 Synopsis: A forbidding castle in the Black Forest holds dangers for Sir Ronald Burton (Richard Greene) when he is invited there for a hunt by the cruel Count von Bruno (Stephen McNally). Burton, searching for evidence that the count murdered his friends, becomes ensnared in a cat-and-mouse game that turns deadly when he falls in love with the count's wife, Elga (Paula Corday). Lovely Elga is being held prisoner by the count with the help of his hulking servant Gargon (Lon Chaney, Jr.). Only the castle physician, Dr. Meissen (Boris Karloff), may have the power to free the lovers, but his method could put them in even greater jeopardy.

Synopsis: "If ye valuest thy immortal soul, open not this accursed chest." So reads the inscription on the 400-year-old metal box found by teen psychic Jessica Burns (Carolyn Kearney) on her Aunt Flavia's farm. Although archeologist Gordon Hawthorne (William Reynolds) warns it should remain untouched, two greedy ranch hands break it open, believing there's treasure inside. What they find instead is the living head of executed devil worshipper Gideon Drew (Robin Hughes), "the foulest and wickedest man to ever set feet upon the earth." Condemned to a living death until he's rejoined, Drew hypnotizes Jessica into unearthing his body so he can "spread hell's flames around the world". A terrifying tale from the Atomic Age of horror movies, The Thing That Couldn't Die is a devilish gem that's a head above the rest.

Synopsis: A house cat sees her owner murdered by two servants under orders from her husband, and becomes ferociously bent on revenge. Directed by John Gilling.