Celebrating forty years of gut-busting laughs, Airplane! remains a hilariously zany and wild spoof with memorable performances from a highly-talented ensemble cast. The classic cult comedy lands on a limited SteelBook edition with a notably improved video presentation but the same DTS-HD MA track as the previous Blu-ray release. Joined by a pair of new supplements, this 40th Anniversary Limited Edition makes for a Recommended flight.

After the success of Kentucky Fried Movie, Jerry Zucker, Jim Abrahams and David Zucker went on to quite literally make a name for themselves with the hilarious spoof Airplane! Its juvenile jabs, unscrupulous low-blows and unexpected cracks at disaster movies, in particular the Airport series, took audiences by surprise and quickly became one of the most popular movies ever made. Despite many of the jokes seeming a bit dated or quaint instead of funny, the cult comedy classic continues to enjoy that same level of recognition from contemporary moviegoers, and the absolute visual zaniness can still deliver a few chuckles forty years later. Besides, the real brilliance behind the film is not only in the endless absurdity or the slapstick parodies but in how the script cleverly and intuitively breaks down genre convention to its simplest form, wittily borrowing from the 1957 action-drama Zero Hour!

Jumping from one joke to the next with little time to rest in between the laughs, the Zucker-Abrahams-Zucker team created a hilarious, non-stop parade of satirical jabs that also effectively expose how the same formula has been recycled over the decades. Not every movie strictly adheres to the structure, but its variations remain a neatly packaged recipe for action-adventure movies, making these tropes seem brainless and preposterously half-baked, subtly poking fun at the audience for watching such clichéd dribble. The only thing separating one disaster flick from the next is the ensemble cast of well-respected actors where once again the trio of talented filmmakers strikes the right notes for laughter. Their juvenile sense of humor works because they also mix some discerning smarts into their deconstruction of the genre. And so, Airplane! remains one of the funniest and most creative comedy spoofs ever. 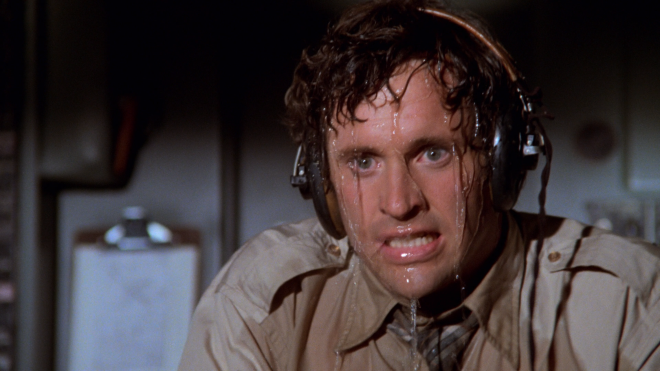 For a more in-depth take on the movie, you can read our review of the 2012 Blu-ray HERE.

Paramount Home Entertainment brings Airplane! to Blu-ray in a 40th Anniversary Limited SteelBook Edition, housing a Region Free, BD50 disc and a flyer for a Digital Copy. When redeeming said code via paramountmovies.com, the movie is available in HD with legacy Dolby Digital audio, but via VUDU, owners are granted access to the 4K Dolby Vision HDR version with Dolby Digital Plus 5.1 audio. At startup, the disc goes straight to a static menu screen with the usual options and music playing in the background.

Reportedly coming a very recent 4K remaster of the original elements, this fresh transfer may not show a night-and-day difference over its predecessor. But this HD presentation nonetheless offers a notable improvement in contrast and brightness balance, boasting brighter, crisper whites and better visibility within the hottest spots. Likewise, black levels are inkier and silkier without sacrificing the finer details in the darkest, blackest sections and shadows, providing the 1.85:1 image with a lovely cinematic appeal and depth. The earth-tone palette is also a tad more vibrant and full-bodied, making all the browns and yellows seem more spirited and full of pep while primaries, especially reds, look richer and more animated.

The only grumble in an otherwise smooth flight is the overall definition not looking much sharper than the last Blu-ray, which has more to do with the condition and quality of those aforementioned elements and the original cinematography. Nevertheless, the picture quality is in excellent condition for a forty-year-old feature, displaying clean, resolute lines on clothing and the 70s interior of the airplane. Facial complexions appear healthy and revealing, exposing wrinkles and other minor blemishes on the faces of actors. The few instances of blurriness and softness are mostly related to the editing, the transitions between scenes and the old stock footage. Overlooking that, the cult favorite has never looked better. (Video Rating: 82/100)

Disaster crashes into home theaters with the same DTS-HD MA 5.1 soundtrack enjoyed on its previous Blu-ray counterpart. For a more in-depth take on the audio quality, you can read our review HERE. (Audio Rating: 74/100)

The same commentary track from the last Blu-ray is joined by a pair of new featurettes.

Often mentioned as possibly the funniest movie ever made, Airplane! still delivers a barrel full of gut-busting laughs, but several jokes are starting to wane into hearty chuckles. The wild, zany spoof on disaster films transformed ZAZ comedy (Zucker-Abrahams-Zucker) into a brand of satirical humor, one which can clearly be seen in many movies today. Yet, this 1980 box-office smash remains one of the most admired and funniest of the bunch. Celebrating forty years of laughs, the classic cult comedy lands on a nice-looking SteelBook Blu-ray package that features a notably improved and slightly better video presentation but equipped with the same DTS-HD MA soundtrack as the previous HD release. Joined by a pair of new supplements, this 40th Anniversary Limited Edition makes for a recommended flight.