Olive Films gives director Milos Forman's exuberant adaptation of the classic Broadway musical Hair its distinctive Signature Edition treatment, and the result is the definitive home video release of an often overlooked motion picture. Though the psychedelic adventures of a group of free-spirited hippies transpire in the turbulent 1960s, the social and political themes the story explores remain all too relevant today. Couple those with a dynamite score that features such famous songs as "Aquarius," "Let the Sunshine In," "Good Morning Starshine," and "Easy to be Hard," dazzling choreography from the legendary Twyla Tharp, and great performances from a top-notch ensemble cast, and you've got a terrifically entertaining musical. A new restoration of the film, improved audio, scads of supplements, and classy packaging help this edition eclipse its 2011 Blu-ray counterpart. If you're a fan of Hair, you'll want to upgrade. Highly recommended.

Hair was a groundbreaking musical when it premiered on Broadway in 1968. Timely, provocative, and packed with political and social statements, it captured the tenor of a turbulent era by celebrating a psychedelic culture and exploring such topical, polarizing issues as race, sexuality, drug use, draft dodging, and free expression. Its pop-rock score by James Rado and Gerome Ragni spawned an array of classic anthems - most notably "Aquarius," "Let the Sunshine In," and "Easy to be Hard" - all of which fueled the show's four-year, 1,750-performance run. Nudity and profanity titillated audiences, while songs like "Hashish," "Sodomy," and "Colored Spade" shocked conservative theatergoers with their graphic lyrics. (I certainly learned a lot while listening to the cast recording when I was a preteen!)

By the time director Milos Forman's buoyant screen adaptation of Hair hit cineplexes in 1979, the show already felt somewhat nostalgic. With the homogenous, greed-propelled 1980s looming, a movie about non-conformism, radical protests, and aimless hippies on journeys of personal discovery seemed like a trip to a bygone era. Today, though, Hair doesn't seem quite so retro. As scores of people march against racial and sexual discrimination, follow their social conscience, and take brave stands against hate, bigotry, and myriad injustices, the movie's themes feel relevant and vital once again. 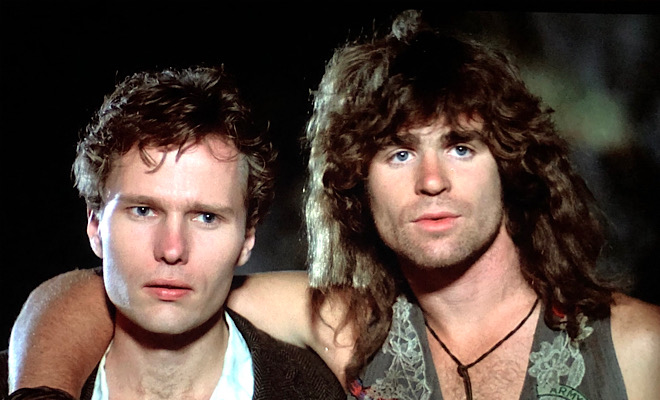 Forman opens up the play, widens its scope, and makes a few plot alterations, all of which lend Hair more gravitas. The simple story chronicles the spiritual awakening of Claude (John Savage), a naive Oklahoma hick who comes to the Big Apple for a couple of days of sightseeing before heading to boot camp and an eventual tour of Vietnam. In Central Park, he encounters a group of hippies, who quickly adopt him, strip him of his inhibitions, and expose him to the wonders - and realities - of the complex world around him. Drugs, sex, and plenty of rock-'n'-roll follow, along with protests, rebellion, and liberation.

The film embraces the material's weighty issues without sacrificing its inherent sense of fun. Powerful moments peacefully coexist with goofy episodes, emphasizing the message of tolerance Hair often preaches. Kinetic energy abounds, thanks to Twyla Tharp's inventive choreography, Forman's artistry, location shooting in New York City, and the ebullience of the cast led by Savage, Treat Williams, and Beverly D'Angelo. (Eagle eyes will also spot early performances from such soon-to-be-famous actors as Nell Carter, Michael Jeter, and Ellen Foley, as well as bits featuring the inimitable Charlotte Rae and noted film director Nicholas Ray, who died just a few months after the movie's release.) Almost anything goes in Hair, and the result is an exhilarating, thoughtful, and touching movie. Its ending may be (more than a little) far-fetched, but it puts a fitting final exclamation point on the picture.

Hair might not be timeless, but it's certainly timely in 2020. Not many films can make such a claim more than 40 years after their premiere, but not many films address such a wide array of important social issues that, sadly, remain topical and unresolved. Coincidence or not, Hair is the right movie for right now.

For a more complete review of Hair, check out my colleague Steven Cohen's take on the 2011 Blu-ray edition of the film by clicking here. 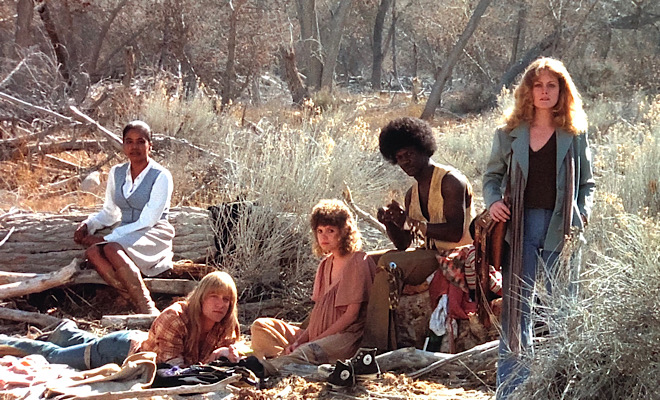 The Olive Signature Edition of Hair arrives on Blu-ray packaged in a standard case inside a sturdy cardboard slipcase. An eight-page booklet featuring an essay by critic Sheila O'Malley and several color photos from the movie is tucked inside the front cover. Video codec is 1080p/AVC MPEG-4 and default audio is DTS-HD Master Audio 5.1. Once the disc is inserted into the player, the static menu without music immediately pops up; no previews or promos precede it.

Olive presents a new restoration of Hair, and though this 1080p/AVC MPEG-4 transfer definitely improves upon the 2011 Blu-ray, the differences aren't as drastic as I had hoped. The most major improvement is the reduction in print damage. Though the opening title sequence still displays plenty of wear-and-tear, it's no longer an unwatchable mess. Occasional nicks and marks crop up elsewhere, but by and large, this is a much cleaner presentation than its predecessor. Grain is ever so slightly reduced, but the image still looks wonderfully film-like, while increased vibrancy and more vivid color punch up the picture just a bit.

Contrast can appear a tad flat at times, but excellent clarity brings out many fine details. Blacks are rich and deep, the bright whites resist blooming, and shadow delineation - save for a couple of hiccups - is quite good. Just like the previous transfer, some softness creeps in now and then, but most of the close-ups are terrifically sharp and all the various skin tones look natural and true.

Though this isn't a knock-your-socks-off, eye-popping presentation, it's enough of an improvement to make an upgrade worthwhile, especially if you're a diehard aficionado of the film.

At first, I thought the DTS-HD Master Audio 5.1 track would be the same one included on the 2011 Blu-ray release, but on closer examination it seems like Olive might have tweaked it just a bit. Levels are definitely higher, which lend the sound a bolder, more full-bodied presence. Tones are rich, fidelity is palpable, and bass frequencies are strong. Stereo separation also seems slightly more pronounced, but surround activity remains subtle at best. Hair is all about the music, and a wide dynamic scale embraces all the highs and lows of all the songs and orchestrations without a hint of distortion. The robust vocals are well prioritized and the electronic instruments and percussion accents are crisp and distinct. All the dialogue is clear and easy to comprehend, and no hiss, pops, or crackle intrude. Once again, the audio isn't a huge upgrade over the previous track, but the differences are noticeable enough to make an upgrade attractive.

The previous Blu-ray edition of Hair was utterly - and shamefully - bereft of supplements, save for a trailer. Olive graciously ports that over, then provides a veritable bounty of extras that examine this musical from almost every angle.

The age of Aquarius dawned a long time ago, but Hair remains fresh, exuberant, and surprisingly relevant in this time of social turbulence, peaceful protests, and passionate activism. The goofy story often struggles to find its footing, but the important themes and sublime music bolster the flimsy narrative. The funky score is as catchy, clever, and provocative as ever, and director Milos Forman's seductive visuals, Twyla Tharp's dazzling choreography, and top-notch performances from an energetic cast stand the test of time and make this adaptation of the 1968 Broadway musical a true feast for the senses. Olive's Signature Edition improves upon the barebones 2011 Blu-ray release with a remastered video transfer, bolder audio, a plethora of supplements, and sleek slipcase packaging that includes a commemorative booklet. Though the video and audio improvements aren't night-and-day, they're noticeable enough to merit an upgrade for fans, especially if you factor in the substantive extras and packaging. I don't know if the moon is in the seventh house or whether Jupiter is aligning with Mars right now, but the time is definitely right to revisit Hair, which comes very highly recommended.