Like a breath of fresh air in Central Park, Sunday in New York comes to Blu-ray with a spanking new HD master that enlivens an already lively rom-com about a virtuous young woman who decides she doesn't want to be quite so virtuous anymore. Jane Fonda adorably plays the recently jilted twentysomething who aims to seduce a guy she just met to gain the experience she thinks men want. A bemused Rod Taylor portrays the object of her attention, and Cliff Robertson and Robert Culp fuel the misunderstandings that inevitably result. Warner Archive's terrific video transfer renders its previous DVD obsolete, and excellent lossless audio showcases Peter Nero's jazzy score. Breezy, often boisterous, and brimming with laughs, Sunday in New York is a perfect date-night disc that renews our faith in love. Recommended.

"Is a girl that's been going around with a fellow a reasonable length of time supposed to go to bed with him or not?"

Back in Hollywood's Golden Age, the plots of countless romantic comedies and sudsy dramas hinged on a woman's virtue. In most of those films, the heroine desperately tries to preserve her squeaky-clean reputation, avoid even the perception of impropriety, or sweep past sins under the rug to either get or hang onto a man. Sunday in New York, a champagne cocktail of a comedy, flips all that on its ear. Director Peter Tewksbury's delightful romp chronicles a day in the life of a spunky young woman who's just been dumped by her boyfriend because she won't put out, so she decides on a whim to shuck her good-girl image to get the "experience" she thinks she needs to be a marketable marriage commodity. Forget virtue. For Eileen Tyler (Jane Fonda), vice is the way to go.

Produced in the early 1960s, just before the sexual revolution got rolling, Sunday in New York possessed just enough shock value to titillate contemporary audiences. It's oh-so-tame today, but thanks to a sparkling script bursting with madcap situations and buoyant performances from Fonda, Rod Taylor, and Cliff Robertson, it still oozes charm and makes us pine for the good old days when life was a lark and bumping into a stranger wasn't the least bit creepy.

After taking the train from Albany, Eileen unexpectedly arrives at the Manhattan apartment of her airline pilot brother Adam (Robertson), who's just invited his girlfriend du jour (Jo Morrow) over for a sexual tryst. Eileen wistfully announces she's broken up with long-time boyfriend Russ Wilson (Robert Culp) because she refused to go to bed with him. She then asks Adam whether he's ever slept with any of his girlfriends. He says no. (He's not exactly lying, because his liaisons don't involve slumber.) Eileen is a bit suspicious, so she makes him swear to it with an oath they used as kids.

Soon, though, Eileen discovers her brother is quite the lothario. (Wasn't every airline pilot in the '60s?) And if he's no longer a virgin, then why should she remain stubbornly chaste? So, in a fit of pique after literally hooking up with Mike Mitchell (Rod Taylor), a Philadelphia sportswriter spending a day of leisure in the Big Apple (her spiky lapel pin gets caught on his suit jacket on a crowded city bus), she decides to seduce him. Mike is shocked by Eileen's advances, yet despite his burgeoning attraction to her, he doesn't want to steal her virtue. But when Russ shows up to win her back, a flustered, embarrassed Eileen tries to pass Mike off as Adam so she doesn't look like a slut. That's when things really get complicated. 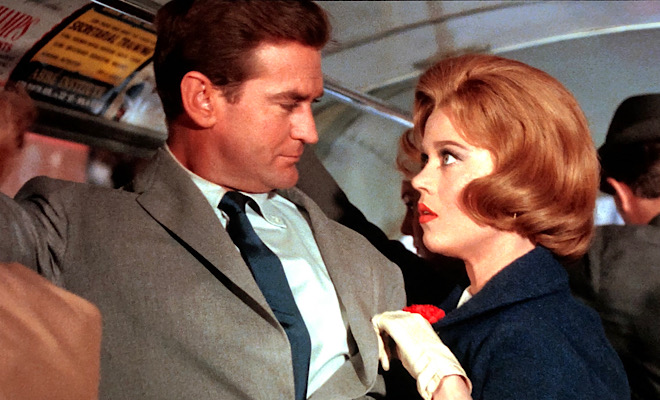 Written by the prolific Norman Krasna, who also penned White Christmas, Let's Make Love, and Indiscreet, Sunday in New York scored a mild success on Broadway with a young Robert Redford in the Rod Taylor role. (Interestingly, Jane Fonda was offered the lead in the play, but chose to do The Chapman Report for director George Cukor instead.) Redford auditioned for the film version, but reportedly gave a poor reading, so Taylor got the part. (As a result, Redford and Fonda would have to wait four years before co-starring together for the first time in Neil Simon's Barefoot in the Park.) That's probably a blessing, because Taylor, who recently finished shooting Alfred Hitchcock's The Birds, brings plenty of easygoing, everyman charisma to Mike, and his rugged good looks mesh well with Fonda's fresh-faced beauty.

Fonda delightfully vacillates between an upstanding prude and coy sex kitten in a disarmingly natural, effervescent portrayal that captivates from beginning to end. Though just 26 at the time and appearing in only her sixth film, Fonda commands the screen. She creates terrific chemistry with both Taylor and Robertson and is beautifully photographed by two-time Oscar nominee Leo Tover, who would sadly die the following year. It's easy to see why French director Roger Vadim would soon become fascinated by Fonda and exploit her untapped sexiness to its fullest advantage. 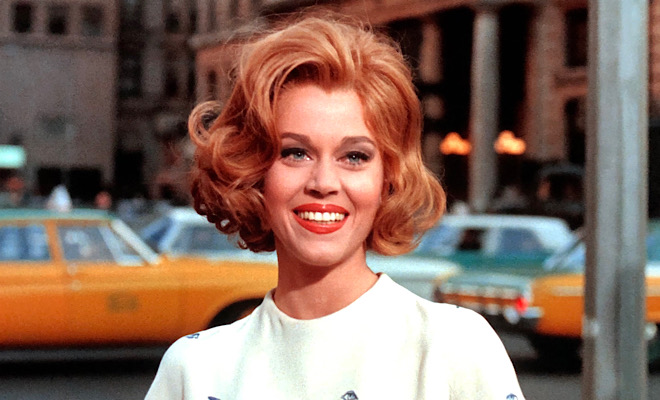 As the harried pilot whose flight schedule continually sabotages his romantic plans, Robertson shows his flair for physical comedy, while Culp continually flashes a mile-wide, toothy grin as the self-satisfied Russ. Jim Hutton, who already had played major roles in a number of films, inexplicably appears in a blink-and-you'll-miss-him bit on the Central Park lake, and jazz artist Peter Nero, who wrote the wonderful music score, gets quite a few album plugs throughout the film and even enjoys a brief cameo in a nightclub scene.

Krasna nicely opens up his play to showcase a number of iconic Big Apple locations, including the famed ice rink at Rockefeller Center, Central Park, and Fifth Avenue, all of which lend essential flavor and authenticity to this comedy. Tewksbury, who honed his talents in sitcom TV (he directed 134 episodes of Father Knows Best and 37 episodes of My Three Sons), deftly mixes screwball humor with touching romance to produce a light, warm, utterly engaging film punctuated by several laugh-out-loud moments.

Sunday in New York cleverly bridges the gap between the old-fashioned rom-coms of yore and the sassier, sexier fare we're accustomed to today. Yes, it's dated. Yes, it's predictable. Sometimes, though, a cozy, nostalgic love story laced with humor and heart is just the tonic we need. Sunday in New York may not cure all your ills, but it will certainly brighten your outlook. 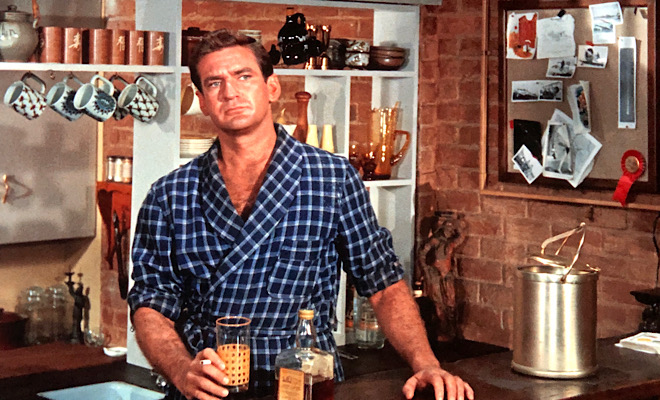 Sunday in New York arrives on Blu-ray packaged in a standard case. Video codec is 1080p/AVC MPEG-4 and audio is DTS-HD Master Audio 2.0 mono. Once the disc is inserted into the player, the static menu without music immediately pops up; no previews or promos precede it.

A brand new HD master perks up this perky romantic comedy and provides a noticeable upgrade from the 2011 DVD. Warner Archive's stellar 1080p/AVC MPEG-4 transfer substantially brightens the picture, enhances contrast and clarity, supplies richer color, and eliminates the nagging specks, occasional blotches, and stray scratches that plagued the DVD. The resulting image is clean and crisp, with a healthy but not intrusive layer of grain that maintains the film-like appearance. A few segments exhibit a bit of softness, but that's really the only negative aspect of this impressive presentation.

Deeper, more varied color lends the image bold accents, while inky blacks, distinct whites, and excellent shadow delineation provide essential contours. The New York locations blend nicely with the studio interiors, sharp close-ups showcase Fonda's peaches-and-cream complexion and the ruddy ruggedness of Taylor and Robertson, and flesh tones remain stable and natural throughout. If you're a fan of this film, you'll definitely want to dump your old DVD and treat yourself to this very impressive Blu-ray.

The DTS-HD Master Audio 2.0 mono track supplies clear, well-modulated sound. The dialogue-driven tale doesn't feature a lot of atmospheric effects or sonic accents, save for the occasional slamming door, punch to the jaw, or clap of thunder, but the audio is nicely balanced, crisply rendered, and free of any age-related surface noise. Excellent fidelity allows Peter Nero's jazzy music score to fill the room with ease, and a wide dynamic scale handles all of its highs and lows without any distortion. Dialogue is the film's most important element, and all the repartee is properly prioritized and easy to comprehend. This is a largely unobtrusive track that does its job with a minimum of fuss.

The only extra is the film's original theatrical trailer, which is in very good condition.

Dated yet delightful, Sunday in New York is a madcap romantic romp guaranteed to brighten your spirits and renew your faith in love. Some risqué elements spice up this zany rom-com about virginity, promiscuity, thwarted sexual trysts, mistaken identity, and unexpected true love. A fresh-faced Jane Fonda deftly finesses her trio of hunky male co-stars (Rod Taylor, Cliff Robertson, and Robert Culp) and breezy direction from Peter Tewksbury whips the clever Norman Krasna screenplay into a delightful confection. A new HD master provides a solid upgrade from the 2011 DVD and crisp lossless audio is a nice bonus, too. Extras are slim, but that's hardly a reason to bypass this upbeat, feel-good comedy that takes place on a Sunday, but plays well any day of the week. Recommended.