It was a movie that didn't need a remake but leave it to Peter Hyams to execute a tense thriller like Narrow Margin starring Gene Hackman as a deputy district attorney tasked with bringing his witness Anne Archer back to L.A. to testify against the mob. Trapped on a train with any number of assassins, it's a tightly wound film that holds up 30 years later. Kino Lorber Studio Classics delivers Narrow Margin to Blu-ray with an impressive video transfer, great audio, and some solid bonus features. Recommended.

Carol Hunnicut (Anne Archer) needed to get out - so she accepted a blind date invitation with a lawyer Michael Tarlow (J.T. Walsh). A simple dinner and drinks turns deadly when Tarlow's key client, the mobster Leo Watts (Harris Yulin) murders him with Carol hiding in the closet. Witnessing everything, she goes on the run. But when Deputy District Attorney Caulfield (Gene Hackman) finds her hiding out in northern Canada t convince her to return and testify, the mob follows. As the pair run for their lives, they board a train unsure where they're going and who they can trust. 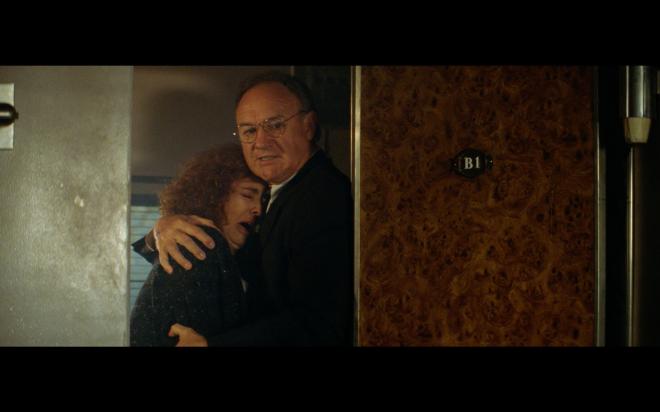 The 1952 Richard Fleischer classic The Narrow Margin wasn't exactly a movie that called out to be remade. It's a fun thriller that still holds up. But leave it to Peter Hyams to deliver a worthwhile modernized remake with a great cast. Hyams may not have always made great movies - he made entertaining movies. With only a few stumbles, Narrow Margin holds up well to repeat viewings even after a number of the great twists and turns have been exposed.

What makes this movie - as is the case with so many films - is Gene Hackman. He's the glue for this movie. His commanding presence, sarcastic wit, and reserved action hero make him a believable foil to the assassins. This isn't a Jack Reacher movie where Tom Cruise would just be endlessly punching guys in the crotch. This isn't a Schwarzenegger flick where the Austrian Oak would pull out a massive machine gun and the movie would be over inside of a few minutes. Hackman's Caulfield is a suit. Sure he was a marine, but that doesn't mean he's been in combat anytime recently. When the guns fire he gets Carol undercover and goes into survival mode. He uses his head first - and that's where the fun of this film comes from. The best scene of the movie isn't a gunfight or fisticuffs, it's Hackman sitting face-to-face with James Sikking's assassin in a battle of wills as they try to buy him off.

I caught this movie sometime in the mid-90s when my Dad rented the tape and I remember being sucked in by it. My parents were always mystery/thriller fans so I got to see a lot of those at a young age. I came to appreciate early on the value of a potboiler where the excitement comes from the tension of a conversation - not a gunfight. That's the best aspect of Narrow Margin. Conversations with random characters who may or may not be so random is what makes a good thriller for me.

Where this movie stumbles a bit early is the Helicopter machine gun assault. When I was a kid I probably loved it but watching it today - it's a bit silly. I get it the mob doesn't want this woman to testify but how obvious do you want to be about it? Shooting up a remote cabin and blowing up another helicopter feels very "80s" action movie and really is the only part that feels dated in this movie. Thankfully Hyams found a steadier footing and pace shortly after that sequence eschewing giant guns for cat and mouse hide and seek tension. That's where the movie works best. Thankfully most of the movie is Hackman being a cool clever cat outwitting his opponents.

Narrow Margin rolls into Blu-ray courtesy of Kino Lorber Studio Classics. Pressed on a Region A BD-50 disc, the disc is housed in a standard study case and loads to a static image main menu with traditional navigation options. The default audio mix is the DTS-HD MA 5.1 track.

For a modestly successful movie released 30 years ago, Narrow Margin sports a winning 1080p 2.35:1 transfer. I'm not sure of the vintage of this transfer supplied by StudioCanal - nothing in the packaging indicates a date, but I've read some sources state it was from a new 4K master. Regardless, this is a very good looking image. No signs of any age-related issues like scratches or speckling. The image maintains a strong natural grain structure providing a welcome film-like quality. Details are robust allowing for full appreciation of facial features, clothing, and the cramped train compartments. Colors offer vivid primaries while favoring golden tones - yellows have a strong prominence throughout. Black levels are strong with a deep inky quality that leans into some of the film's noir qualities while maintaining a terrific sense of depth and dimension. All around this is a great transfer.

It's dealer's choice for the audio department - both the DTS-HD MA 5.1 mix and the DTS-HD MA 2.0 track are great options for viewers. Personally, I liked the 2.0 track better simply for how tight the fix felt given the train setting, but the 5.1 mix offers its own bag of tricks as well. The 5.1 mix naturally opens things up a bit giving a decent amount of surround activity. The helicopter shootout is a highlight sequence. Once the movie moves inside the train there isn't a dramatic surround presence. The channels kick in here and there but for more incidental beats than something dynamic settling more for the atmosphere of the room. The final chase sequence is another highlight moment for this mix. Throughout both tracks, the dialog is clean and clear, scoring by Bruce Broughton is engaging adding tension without overpowering the other elements. As I said, pick either mix and you should be good to go!

While not a massive collection of features, it's nice to see that Narrow Margin enjoys a smattering of worthwhile bonus features. Most of these are archival pieces from previous home video releases. I hadn't heard the archival Peter Hyams audio commentary before and it sounds a little "odd." It's informative but it also has bizarre gaps in it. It doesn't start until the opening credits are finished and he doesn't introduce himself. It feels like he had a moderator who was deleted from the track - I could be wrong but it's the only way I can account for the gaps in the track. It's worth listening though, he offers up great info about the film. The Peter Tonguette track is also very informative and worth listening to. The rest of the materials aren't that impressive but fun looks just the same.

Peter Hyams' Narrow Margin is just a fun thriller. 30 years later, it holds up well even after the plot twists have been exposed through repeat viewings. Gene Hackman and Anne Archer carry the movie as they slink along and hide in a train from a team of assassins. It's a tense ride and one of the few remakes that actually works and justifies its existence. Kino Lorber Studio Classics delivers an all-around excellent Blu-ray release featuring a great A/V presentation with some worthwhile informative bonus features. For a fun early 90s thriller, Narrow Margin is an entertaining show. Recommended.