Is it a horror movie? Is it a German exploitation movie? A little bit of both? Horrors of Spider Island is a cheesy monster classic in search of an identity. When a touring group of dancers washes ashore a remote pacific island, their manager is bitten by a radioactive spider and becomes a horrible creature - but that's not going to stop these sexy ladies from having a dance or two! Relegated to the outskirts of home video for far too long, Severin gives this film the HD treatment it deserves featuring both the restored original saucy German version as well as the neutered down American version with respectable image transfers, decent audio considering the source, and a host of great bonus features. Strap yourself in, this one's a doozy! Recommended.

"A hammer... with a long handle. It must be for the purpose of excavating some kind of metal. Most probably, uranium!"

It's not always a bad thing when you discover a movie thanks to Mystery Science Theater 3000. While their editing department for each episode could resemble a butcher's shop, others actually benefitted from the process. Hell, the producers of Parts The Clonus Horror were able to sue the filmmakers of The Island thanks to MST3k fans alerting them to the glaring similarities. MST3k introduced me to Horrors of Spider Island - it's one of my absolute favorite episodes of the Mike years. My wife and I can watch that episode over and over as the film practically begs to be riffed. But that doesn't mean it's not worth watching in all its native glory! 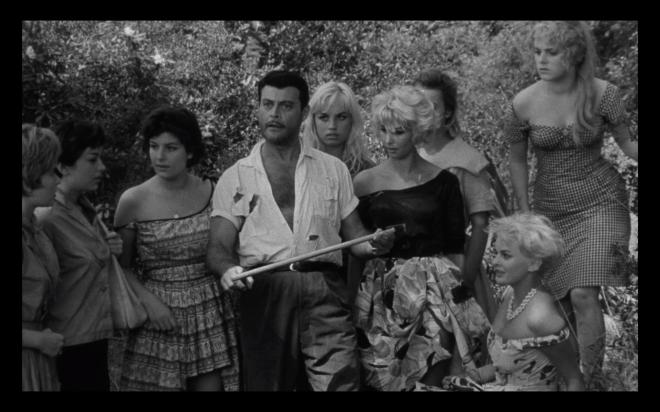 Several years ago I managed to locate a VHS copy of Horrors of Spider Island from Something Weird un-riffed and relatively speaking uncut. My recollection of it is that it wasn't as complete as this Severin release with the un-dubbed German cut sequences included, but it was pretty darn close to the broadcast version of the MST3k episode. I mention all of this because there are multiple versions of the film out there and it's just a delightfully weird film whichever version you come across. The first half of the movie rolls like a low-budget B-movie horror feature playing things by the numbers but then it finds these random segues into a nudie exploitation movie and it's kinda hilarious. A catfight between two of the dances escalates rather quickly, to say the least!

Then you have our monster… or I guess more accurately - monsters. First is the radioactive spider-thing. It's a pretty gnarly little critter but the limitations of the puppet don't exactly make it look threatening - especially when it attacks it's clearly being thrown at the cast by and off-camera crewmen. Then when it bites poor Alexander D'Arcy's Gary - he doesn't get awesome spider powers. He doesn't get to swing from buildings and fight supervillains. Instead, he gets weird claw hands, a bunch of fake hair glued to his face, and some funky teeth shoved into his maw. And then he sorta comes and goes stalking the sexy ladies of the island until the end when we finally get some genuine monster mayhem.

Far from being the best-plotted piece of horror and/or exploitation filmmaking, Horrors of Spider Island is a big bag of fun. Not a great movie - a fun movie. While the full German version with English subtitles works much better and feels more natural without the goofy English dubbing, that English dubbed version is still my preferred way to go. Like a cheap Godzilla movie, the dubbing lets the movie lean into the ridiculous. If you can't make a truly great horror movie - at least make one that's entertaining! This is an entertaining movie, and the more people you can watch it with the better. You need some audience participation to survive this one!

Horrors of Spider Island arrives on Blu-ray courtesy of the amazing folks at Severin Films in a single-disc set. Pressed on a Region Free disc, the disc is housed in a black Blu-ray case with reversible insert artwork complete with a cardboard slipcover that depicts alternate poster art - so effectively you have three looks for the artwork! The disc loads to a thematically unique version of the FBI warning before arriving at an animated main menu with traditional navigation options.

IF you were lucky enough to order from Severin directly before they sold out, you could purchase a bundle complete with a poster and a mini-figure of the spider creature-thing! Sadly I missed out on that. Severin had more available for their Mid-Year sale but with their unfortunate website troubles I missed out a second time. But fear not - if you are a figure fiend like me - they're apparently negotiating to get more figures made, so fingers crossed that comes through.

Considering Horrors of Spider Island is over 60 years old and has never been left in the best of hands as it's been cut and recut for various markets, it's actually a modern marvel that this movie looks as good it does. Severin has delivered a respectable 1080p transfer. This isn't to say that this is a revolutionary addition in the annals of film preservation - but for this movie, it's particularly impressive! From old trashy VHS masters and the MST3k print - this movie has never looked good on home video, and now it does. Details are impressive from the outset allowing you to fully appreciate facial features, costuming, and even the daffy monster makeup. Film grain is apparent with a natural appearance giving way to a welcome film-like quality.

The full uncut Germain version is in strong shape - with obvious cut sequences reinserted. These moments are where any age-related issues slip up in the form of heavier than normal speckling, additional scratches, softer details, and a heavier grain structure. The U.S. version with the incredibly silly title It's Hot In Paradise was sourced from a low-con print that's in equally impressive shape with similar detail, grain, and grayscale attributes. The prominent issue between both versions is an amount of persistent frame judder. It's not terrible but it can be a little distracting - with that - my memory of the Something Weird VHS tape had that trouble as well.

It's dealer's choice for fans as you get to enjoy Horrors of Spider Island with respectable Germain or English DTS-HD MA 2.0 mono tracks with or without subtitles. The German version has a little better dialog - it doesn't quite sound so ridiculous as the English dub. Both spoken languages are clean without difficulty hearing. Scoring is a bit on the tinny overpowered shrill side of things -, especially during any "dance" numbers. Sound effects are pretty limited to only essential effects within any given scene so there isn't much imaging. Some sequences are just flat silent. As is, these audio mixes are come as they are. Throughout home video releases there's always been a noticeable amount of hiss, crackle, and pops. Thankfully they're not distracting but they're present just the same. This is also the case for the English mix on the alternate US release It's Hot In Paradise. For what it is - it's still pretty good!

Considering having Horrors of Spider Island on Blu-ray was already a pretty big long shot, I am not at all disappointed with the bonus features package here. You get the US version It's Hot In Paradise which is basically the same movie with all of the random smattering of brief nudity removed - basically identical to the MST3k episode. the rest of the features are rather brief but the short audio interview with actor Alexander D'Arcy is pretty cool and Germain film professor Marcus Stiglegger provides interesting anecdotes about the film as well as the film industry in Germany as a whole when this film was made. All are worth checking out.

Reviewing Horrors of Spider Island is like preaching to the choir at this point. You're either a fan of the film either through a random VHS rental or because Mystery Science Theater 3000 helped make it famous during the Mike years. Riffed or otherwise, this is a movie to be enjoyed with friends. It's not scary, it's not sexy - it basically fails to do anything it sets out to do, and yet it's endlessly entertaining. Get some friends together, grab a beer, order some pizza - this is a party movie and with the right group you'll have a blast.

Severin Films has done a fine job delivering this daffy piece of German exploitation cinema to Blu-ray. For years I'd been kicking myself in the ass for not buying the VHS when I had the chance and now I don't have to because this disc gives fans what they want. You get the longer "sexier" cut of the movie with all the silly nudie bits added and the familiar US cut of the film as well. The video transfer and audio mixes are the best they can be considering this movie has had a pretty rough release history of being recut and retitled numerous times. On the whole, this is a winning effort that fans of this sort of genre material will be please to gobble up. Recommended.