Just as he's moving into the studio system and ultimately giving up his creative freedom, Buster Keaton delivers one final genuine comedy classic with The Cameraman. Keaton's hapless newsreel cameraman stumbling to prove himself to his employer and his crush is one of his most human and relatable comedically tragic characters. It's a beautiful film and finds its home with the Criterion Collection offering a truly gorgeous 4K restoration complete with score by Timothy Brock and a host of amazing bonus features. In a career of masterpieces, The Cameraman stands as one of his best - Must Own.

Buster (Keaton) is making his way as a tintype selling portraits 10 cents at a time. In a chance encounter, he meets the beautiful newsreel worker Sally (Marceline Day). In his quest to get to know her, Buster signs himself up as a newsreel cameraman running throughout the city trying to find the perfect scoop. Struggling to woo Sally and prove himself in the new job, Buster will haplessly stumble from one incredible newsworthy event to the next with comedically tragic results. 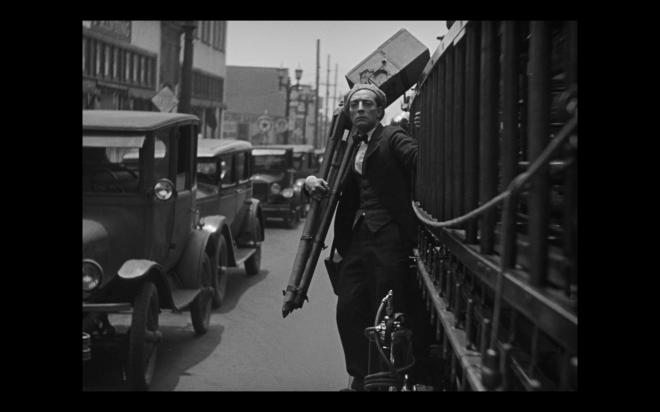 I love The Cameraman. I love most all of Buster Keaton's films - The General, Steamboat Bill, Jr., Go West, and College among numerous others are all classics. But I think I love The Cameraman above all others. Buster Keaton has always been a master of playing the lovable hapless man who ends up in a situation above his weight class - but here his lovelorn Buster is the most relatable to me. A guy trying so hard to not only impress a woman but prove himself professionally - and fail at nearly every turn. It's fremdschämen at its most extreme. At 69-minutes, The Cameraman is about 65-minutes of awkward tragic comedy with about 4 minutes of genuine joy and pleasure. Throughout you laugh at the awkwardness, you giggle at his stumbles, but you're truly laughing and cheering for him at the end. He's worked hard - he's earned it.

As the first movie Keaton made when he signed on with MGM - it's sadly his last true classic. After The Cameraman his films were subject to the mill of the studio system and he lost the level of control he enjoyed for over a decade. This isn't to say The Cameraman is his last good movie - but it's his last classic. The comedic timing with his incredible stunt work - it's thrilling and hilarious to watch the man do what he did. 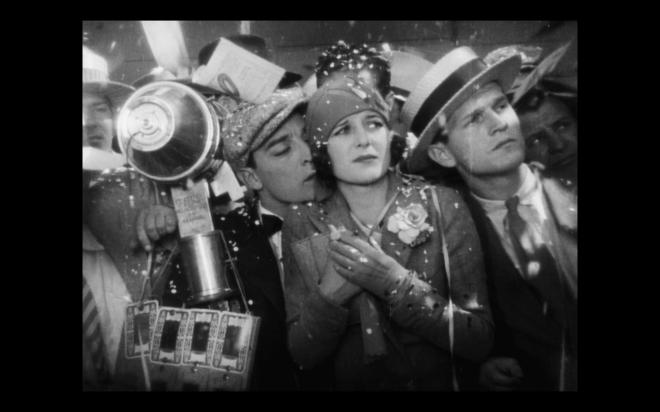 The Tong war sequence isn't just an intense action scene - it's loaded with comedy. When the two of the legs of his tripod get shot off - what does he do? He sticks the last leg out into the line of fire to level it off so he can keep filming - all with an ornery little monkey on his back! Then you have something like the swimming pool scene - which is just one moment of awkward escalation after another with hilarious results. As with most of Keaton's movies, this is a true acrobatic gem that deserves to be on every collector's shelf.

The Criterion Collection delivers The Cameraman to Blu-ray in a single disc set. Pressed on a Region A BD-50 disc, the disc is housed in a standard clear case with spine number: 1033. Also included is a 36-page booklet containing essays and photos from the film with details about the restoration. Also included is a segment of Keaton's autobiography The Worst Mistake of My Life where he details his decision to join with MGM and how he regretted that choice after working within his own studio so successfully. The disc loads to a static image main menu with traditional navigation options.

For this release of The Cameraman - fans get to enjoy the efforts of a glorious 4K restoration. Keeping with the film's 1.37:1 aspect ratio, this 1080p transfer is simply glorious. I've watched this movie countless times and from frame one I was struck by how brilliantly detailed the image was. And clean! I've seen some pretty rough releases over the years but this is easily the best as the film suffers only from the expected mild speckling, some occasional scratches. As this film was restored from three key source elements there are some differences as the footage moves in - namely softer appearance, maybe a heavier grain appearance but that's the worst of it. Details are gorgeous here - I felt like I was seeing so much of the film for the first time. The staging of the Tong war sequence was incredible with the scale and dimension - his stunt work during that moment is amazing! Grayscale and black levels are really impressive - again subject to the quality of the elements at hand - but for an overall experience, there's an appreciable sense of three-dimensional depth. For a film that's inches away from celebrating its centennial anniversary, I'm amazed by this one. I knew Criterion would go all out for it, and I'm glad to be able to see these efforts on the screen.

As a silent film, we obviously don't have action-packed sound effects and dialog-driven scenes here, but that didn't stop Criterion from delivering an excellent LPCM 2.0 track featuring a brand new score from composer Timothy Brock. Performed by the Teatro Comunale di Bologna, the music is pitch-perfect for this film leaning into the comedy as well as the awkward tragedy.

In addition to a great movie fully restored with a terrific transfer, Criterion delivers one hell of a bonus features package. Leading the pack is a new 2K restoration of Buster Keaton's Spite Marriage from 1929. This is a pretty funny movie. I guess this is where you can start to call things of Keaton's later years of a "good" movie but not one of his greatest. The archival audio commentary with Glenn Mitchell is fantastic as he gets to explore a lot of detail about Keaton's career but silent film as a whole. After that, the rest of the bonus feature package is made up of a terrific assortment of mini-docs that discusses the improvements in early-era motion picture cameras and Buster Keaton's career. All well worth checking out.

When you comprehend the idea that nearly 3,500 silent films are lost forever - it's a miracle we have the ones we enjoy today. Buster Keaton was a signature talent combining heartfelt everyman performances with deft comedic timing and incredible stunt prowess. When he was an independent filmmaker - he was a master craftsman. When he joined MGM, he became part of the machine and lost his creative freedom. The Cameraman marked the end of an era where he was able to make a glorious comedy without the intrusive eye of studio bosses and producers. I've always had a tough time pinning down a favorite Keaton movie, The General was the first one I saw and I love it dearly, but The Cameraman hits my sentimental side like a ton of bricks.

The Criterion Collection has delivered a terrific Blu-ray release of The Cameraman. Featuring an amazing video restoration with a beautiful new score, this disc comes with Keaton's followup film Spite Marriage with other worthwhile bonus features to pick through. I know the old silents may not be everyone's taste, but this is a great film and a great release. If you're a fan pick this one up. If you're discovering Buster Keaton, this is a great place to start. Must Own.