Come And See is a Belarusian film from 1985 that follows a young boy as he tries to survive and avoid capture by the Nazis at the height of the Holocaust. With a remarkable visual style along with a terrifying journey in the center of hell on earth, this film is one of the best narratives on the cruelties of the Holocaust and WWII. Criterion gave this a new 1080p HD transfer with its original mono soundtrack and tons of new and vintage extras. Highly Recommended! 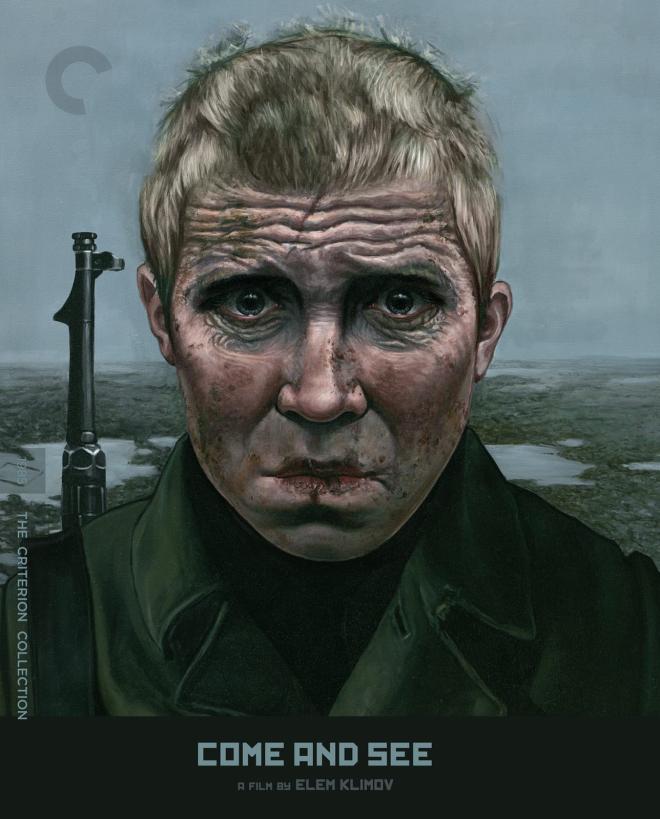 There have been a smattering of films over the past several decades that cover the atrocities of the Holocaust with everything from the Oscar-winning Schindler's List from Steven Spielberg to the just as important Hungarian indie film Son of Saul. Even Salo: 120 Days of Sodom covered the nazi regime in Italy and most recently, Taika Waititi took an impressive approach with Jojo Rabbit. These films have spanned multiple decades and genres that try and tell part of a massive story and war that happened not too long ago across the globe. Claude Lanzmann's 10-hour documentary Shoah captured perhaps the most visceral stories from all aspects of life from that time, but it's with Soviet film director Elm Klimov's 1985 film Come And See that some of the most disturbing visuals are shown that have capsulated the Holocaust in a strikingly visual way, similar to the recent film 1917, a vision that is not soon forgotten.

Come And See takes its title from The Apocalypse of John, where Johnny Cash used the words in his song "The Man Comes Around", stating, "And when he had opened the fourth seal, I heard the voice of the fourth beast say, "Come and see!" And I looked, and behold a pale horse: and his name that sat on him was Death, and Hell followed with him." Those are truly terrifying words, and they certainly ring true throughout this tragic, yet poetic movie that's full of unimaginable chaos and beautiful magic realism.

Perhaps one of the reasons this film is so brutal and horrifying is that it's told from the perspective of a young Soviet boy named Flyora, who is basically drafted from his village, where his mother and family both root for him and don't want him to go off and fight the Nazis. His childlike charm as seen in the first couple minutes of the movie where he and a young friend are playing in the sand, looking for buried rifles of soldiers all comes to a screeching halt sooner rather than later as young Flyora faces the intense nightmare of war.

Once Flyora is with the Belorussian resistance, he is only allowed to do menial tasks which is where he meets a young girl named Glasha, working as a nurse. They are told to stay put at the camp as the other older soldiers leave, but are then ambushed by Nazi explosions, paratroopers, and soldiers decimating everything in their path. The two kids must survive a trek across mud, hills, forests, and bodies while also dodging bullets, bombs, and a variety of enemy soldiers. At one point, Flyora convinces Glasha to check on his parents back in his village, only to not find them there.

In a terrifying image, Flyora suddenly realizes his family and neighbors escaped the Nazi attack, but as the two teens run to safety, Glasha looks over her shoulder to reveal dozens of dead bodies behind Flyora's home. It's a haunting image and it only gets worse from there. As they journey, the soundtrack is filled with alarmingly loud bombs and explosions that almost sound like a hellish symphony of classical music conducted by evil, complete with screams, dead carcasses, and flies eating the flesh of the dead. Flyora and other resistance fighters must in someway envy the dead as it puts to rest the harmful world around them, even so much that they try and bury their head in mud to drown the noise out. It's pure misery on screen.

That being said, Elem Klimov mixes some surreal and magical imagery throughout the dust and fog that gives way to hope and destruction as this young boy is forced to witness the murder of his people, devastation and rape on a consistent basis. There is some kind of nasty elegance to the camerawork here as it puts the beauty of the land in the background and its wonderful nature that has to watch babies getting thrown in the air to their death and young girls being dragged by their hair as soldiers laugh. It's as if there's a ballet of violence being performed on screen.

Come And See is one of the most truthful and horrific narratives on the Holocaust. It's extremely difficult to watch in parts, but there is also a poetically devasting film about war. This is one of the all-time great movies in the genre and nothing has ever been matched to this still to this day.

Come And See travels to 1080p HD Blu-ray from Criterion with a new 2K master with spine #1035. The disc is housed in a clear, hard plastic case with new fantastic artwork. There is also a booklet containing two essays, info, and specs on the film. 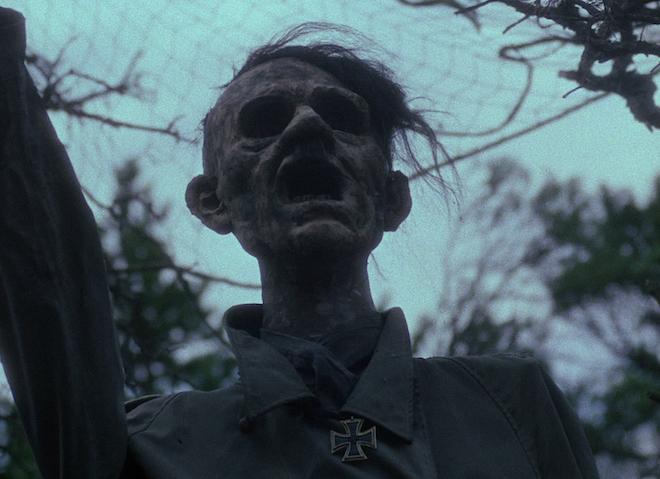 Come And See comes with a new 1080p HD transfer in its original 1.37:1 aspect ratio that looks the best it ever has with sharp detail and a great color palette. According to the Criterion booklet, Come And See was created in 2K resolution from the original 35mm camera negative and then restored.

The detail is quite vivid throughout, revealing all the nasty, horrors of bullet wounds, burnt flesh, and exploded bodies. The practical effects in the makeup look excellent with fantastic wrinkles, age marks, dirt, and bloody bits of human body parts strewn about. Wider shots of the trees in the forest and military uniforms all show the necessary textures in all lighting conditions. The closeups of the actor's faces are where the spotlight is though, showcasing every tiny detail in these terrified faces.

The color palette is mostly all doom and gloom with a ton of foggy blues and grays, but it's mixed with some spectacular shots of bright greenery in the forest as well as some hot red, orange, and yellow fire from bullets, bombs, and explosions that contrast well with the colder, dark nature of the film. It really is a breathtaking landscape that was filmed all on location. The skin tones are natural and the black levels are deep and inky with no crush. There is a great layer of film grain that keeps the image filmic and never fluctuates in any lighting scenario. Lastly, there were no issues with banding, aliasing, or video noise. 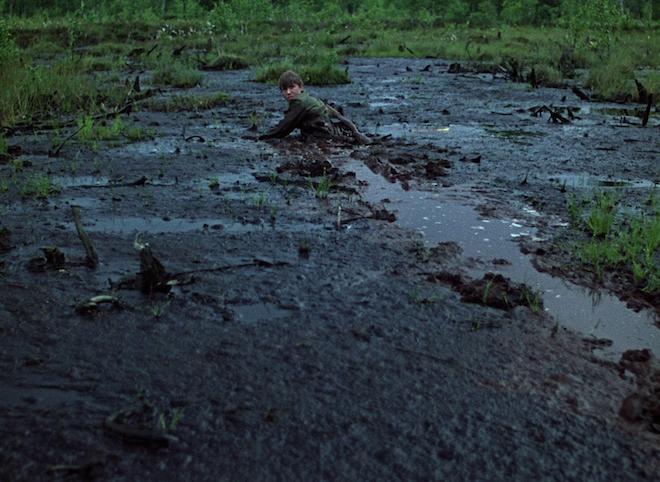 This Criterion release comes with a monaural soundtrack that according to the booklet was remastered from the 35mm magnetic track. The sound effects of rampant gunfire, bombing runs, explosions, and horrific screams are all robust and loud. It's a thunderstorm of horrifying noises that seem to never end and this mono track handles the nuanced sounds nicely, even though there isn't any surround or bass to accompany this track with. The film could have benefitted from a newly mastered 5.1 track, given it takes place in the center of a chaotic war. Still, the dynamics and balance of the voices to the artillery sound very good. Quieter moments take in the silence with some atmospheric nature sounds within trees and rain. Dialogue is cleanly presented in Belarusian, Russian, and German with English subtitles. There are no major problems with his audio track. 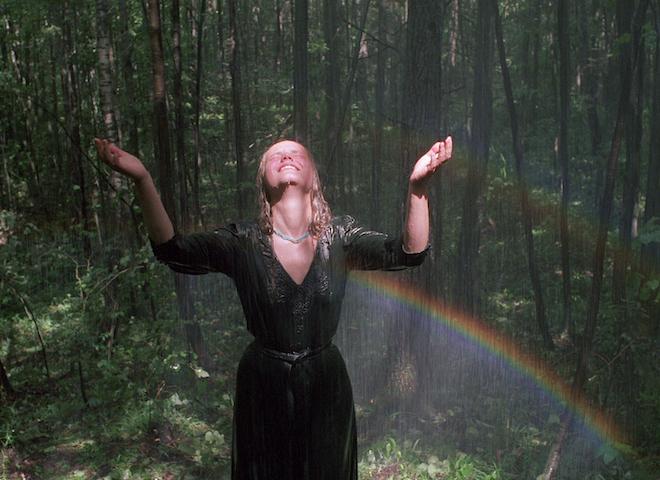 With around 133 minutes of bonus material, there is plenty of information about the production and making of the movie to watch, including new and vintage interviews with the cast and crew, documentaries with real people who went through the Holocaust, and more. Each extra is worth the watch. 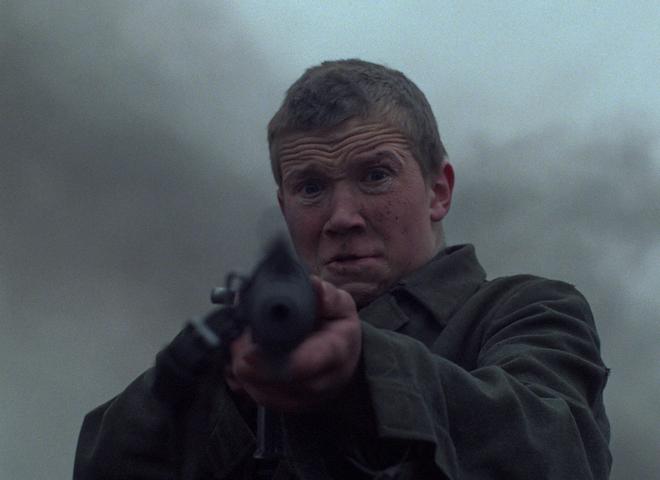 Come And See is a much-welcomed addition to the Criterion family as this film is one of the best takes on the Holocaust. There's nothing else like it and will stick around for days after viewing with some excellent cinematography and poetic beauty within all the violence. Criterion knocked it out of the park with its video and audio transfers along with its fantastic bonus features. Highly Recommended!