Blood on the Moon

With a strong cast led by a brooding Robert Mitchum and dazzling direction by a young Robert Wise, Blood on the Moon is a crackling western-film noir hybrid that honors both genres with grit and style. The conflict between a group of renegade homesteaders and a gruff, stubborn cattle baron forms the basis of the plot, but it's the simmering psychological tension, finely drawn characters, potent performances, and artistic touches that distinguish this engrossing and underrated film. Warner Archive's gorgeous transfer showcases the breathtaking scenery and lush, shadowy photography, while a robust lossless audio track immerses us in the rugged atmosphere. You don't have to be a western fan to appreciate Blood on the Moon; you just have to love good movies. Highly Recommended.

As much as I love and admire West Side Story and The Sound of Music, I fear those two iconic, Oscar-winning musicals unfairly define director Robert Wise and overshadow his other work. The man who first made a name for himself as the editor of Citizen Kane was a versatile craftsman, and as his directorial career developed in the late 1940s and early 1950s, he made several taut, gritty pictures. One of those films was Blood on the Moon, an underrated, often riveting western distinguished by poetic artistry, psychological themes, and some striking film noir accents.

The story, which chronicles a greedy homesteader's scheme to swindle a cattle baron, may sound pedestrian, but Wise's presentation is anything but. Arresting visuals, deliberate pacing, rugged locations that look gorgeous even in black-and-white, and solid performances by Robert Mitchum, Barbara Bel Geddes, Robert Preston, Walter Brennan, and Phyllis Thaxter elevate the tale and keep us transfixed throughout. Wise fashions an array of eye-catching images, but eschews flashy technique in favor of subtlety and nuance, and bends the rules of western moviemaking by embracing and depicting the darkness that swirls about all the characters, good and bad. No one is completely clean in this grimy world, and it's that provocative film noir sensibility that makes this western feel so fresh and exciting. 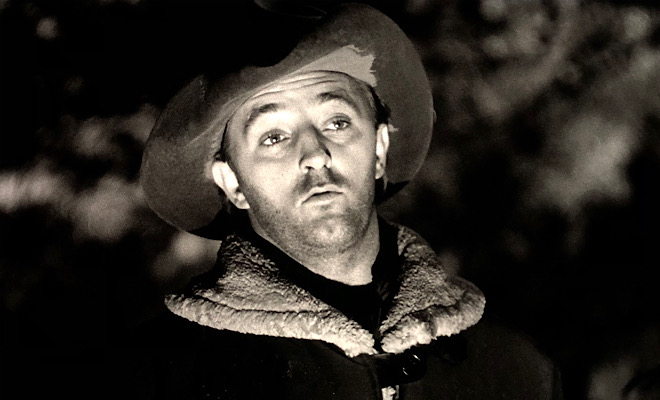 Just as he would do in his next movie, the classic boxing drama The Set-Up, Wise examines - and salutes - a quiet, stoic man who bucks the system and thumbs his nose at the mob to preserve his honor, integrity, and self-respect. Jim Garry (Mitchum) is a loner and drifter who's recruited by his affable buddy Tate Riling (Preston) to help him in a cattle swindling scheme that would net both of them big bucks. The scam involves misleading and cornering cattle dealer John Lufton (Tom Tully) so he's forced to short sell his herd to Tate's band of crooked homesteaders. Then Tate can peddle the cattle to the government at an inflated price and live on easy street with Lufton's dewy-eyed daughter Carol (Thaxter), who doesn't realize she's simply a pawn in Tate's high-stakes game.

Lufton is leery of Jim, and so is his younger daughter Amy (Bel Geddes), who is sure Tate is up to no good. Jim tries to remain above the fray, but after a stampede causes some collateral damage, he realizes he can no longer participate in Tate's scheme. That sets in motion a romance between Jim and Amy and sets up a showdown between Jim and Tate, with the fate of the Luftons, their cattle, and the region's future hanging in the balance.

In the hands of a lesser director and cast, Blood on the Moon likely would not rise above the mundane, but Wise and his crew attack the material with such vigor they almost instantly enrapture the audience. Mitchum, with his droopy eyes, sullen demeanor, and strapping frame, makes Jim an imposing presence, and his no-nonsense acting style perfectly suits the character. Like bleu cheese, Mitchum can be an acquired taste; it's taken me years to truly appreciate the enviable talent hiding behind his blasé macho persona. I used to equate Mitchum's mumbling and monotonic line readings with disinterest, but now I see there's much more to his performances than initially meets the eye, and I enjoy peeling back the layers as I watch him ply his craft. Jim Garry isn't a very challenging role, but Mitchum embraces the character's complexities and adds dimension and duality whenever possible. 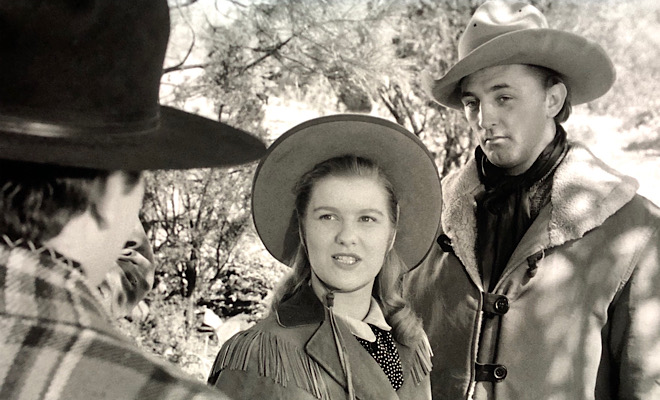 It's a pity Bel Geddes didn't appear in more films, because she's so sincere and luminous on screen. In Blood on the Moon, she's also a bit of a spitfire (a prelude to her acclaimed portrayal of Maggie the Cat in the original Broadway production of Tennessee Williams' Cat on a Hot Tin Roof seven years later), and her strength and stubbornness nicely complement Mitchum's machismo. She also makes a believable sister to the equally warm and genuine Thaxter, who should have enjoyed a more productive Hollywood career as well. Today, Thaxter is probably best remembered for playing Christopher Reeve's adoptive mother in Superman, and she brings the same brand of nobility and authenticity to several supporting roles in the 1940s and 1950s.

Preston previews his iconic role as con man Harold Hill in The Music Man as the charming yet scummy Tate, who uses his twinkling eyes and mile-wide toothy grin to win friends and influence enemies, and Walter Brennan (would a western really be a western without Walter Brennan?) turns in a surprisingly poignant portrayal of a gruff, grizzled homesteader whose life is irrevocably altered by tragedy.

If you're looking for a western in the grand, epic, elegant tradition, stick with John Ford, but if you crave something edgier and with a bit more bite, make a date with Blood on the Moon. And while you watch it, remind yourself, "this is the same guy who made The Sound of Music." If that doesn't make you respect and revere Robert Wise, and spark a desire to see more of his work, nothing will. 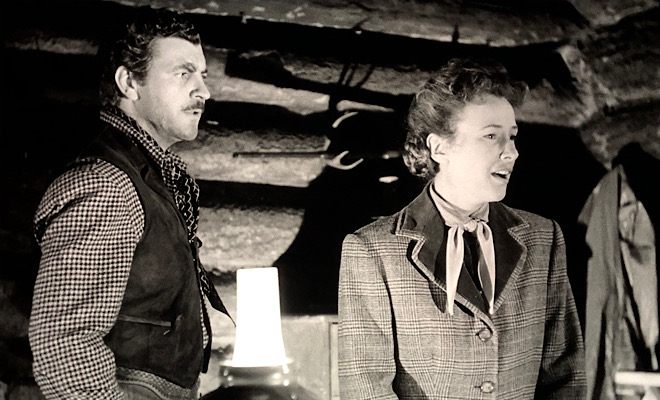 Blood on the Moon arrives on Blu-ray packaged in a standard case. Video codec is 1080p/AVC MPEG-4 and audio is DTS-HD Master Audio 2.0 mono. Once the disc is inserted into the player, the static menu without music immediately pops up; no previews or promos precede it.

With its stunning Sedona scenery and shadowy noir accents, Blood on the Moon is one gorgeous-looking movie, and Warner Archive's high-quality 1080p/AVC MPEG-4 transfer maximizes the impact of every beautiful shot. Just the right amount of grain preserves the film-like feel and supplies essential texture to this tough, outdoorsy tale. Excellent clarity, contrast, and grayscale immerse us in the rugged atmosphere and faithfully honor the arresting cinematography of Nicholas Musuraca, who photographed one of the best film noirs ever made (Out of the Past) the previous year and would receive his sole Oscar nomination the same year for I Remember Mama.

Deep black levels and superior shadow delineation enhance the noir feel and breathtaking day-for-night shots make us rue the extinction of that antiquated technique. Whites are bright, but even the snowscapes resist blooming, while daylight exteriors in the Arizona sun exhibit a realistic degree of harshness. The close-ups of the women are soft and lovely, but the ones of Mitchum and Preston are gloriously sharp, showcasing fine details like sweat, stubble, and blemishes. Rain is well defined, costume fabrics are crisp, and background elements are easy to discern. Best of all, the source material is practically spotless, with only a few errant nicks, marks, and scratches dotting the print, and only a smattering of intermittent softness throughout.

I haven't seen any other home video incarnation of Blood on the Moon, but I can't imagine this western noir looking any better than it does here. Once again, Warner Archive does a classic movie proud.

A vibrant, full-bodied DTS-HD Master Audio 2.0 mono track complements the terrific video transfer and wonderfully enhances the western atmosphere. The well-balanced mix features a wide dynamic scale that embraces all the highs and lows of the rousing music score by seven-time Oscar nominee Roy Webb without any distortion. Subtleties like chirping birds, crackling campfires, driving rain, and footsteps crunching in the dirt come through cleanly, while sonic accents like explosive gunfire, shattering glass, and galloping horse hooves are crisp and distinct. All the dialogue is clear and easy to comprehend, and only a smattering of faint surface noise creeps into a few quiet scenes. As mono tracks go, this one is especially robust, and it lends the movie an extra bit of oomph.

The only extra is the movie's rough-looking re-release trailer, which makes us appreciate the beautiful Blu-ray transfer all the more.

Blood on the Moon blends the best elements of westerns and film noirs and provides Robert Mitchum with one of his best roles of the 1940s. Directed with bold flair by Robert Wise, this underrated tale of conflict, deceit, action, and romance set against a rugged Arizona backdrop lassoes us early on and keeps us happily tied up in knots throughout. Warner Archive honors the top-flight cinematography with a gloriously lush black-and-white transfer and provides a robust lossless audio track that thrusts us into the thick of the action. Blood on the Moon may not be an iconic western title, but it's a definite diamond in the rough, and it comes Highly Recommended.