In Search of Dracula

Christopher Lee hosts an in-depth look at his most iconic character with 1974's In Search of Dracula from Kino Lorber Studio Classics. By looking at the original vampiric folklore, director Calvin Floyd, this fascinating documentary works to dissect the man and myth behind everyone's favorite bloodsucker. Featuring an impressive transfer, solid audio, and a worthwhile commentary track - this film is a terrific trivia piece for horror fans - especially if you're a Christopher Lee Dracula fan! Recommended.

Was he a man or only a myth created by an Irish author who managed to produce a hit novel that has been adapted into more films, television shows, and plays than practically any other work in history? The 1974 documentary In Search of Dracula sets out to demystify the vampire legend as well as parse through the numerous historical accounts that inspired the creation of Bram Stoker's Dracula. With legendary Dracula actor Christopher Lee narrating, this film delves pretty damn deep into the lore of vampirism, the historical accounts of Vlad Tepes A.K.A. Vlad the Impaler A.K.A. Vlad Dracul. 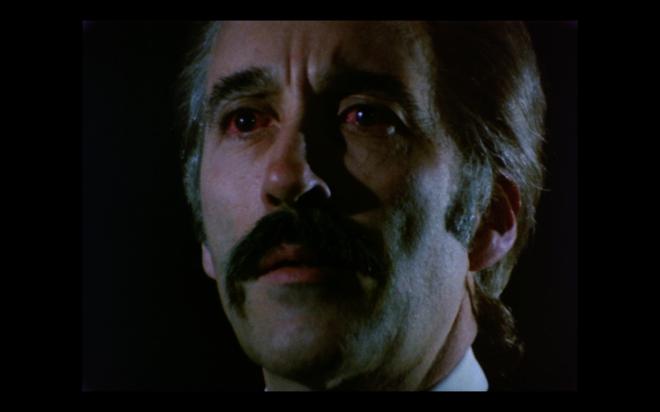 While this movie could have been perfectly content with drawing the simple A to B roadmap to boast "See! Dracula was a real person!" - In Search of Dracula goes much further picking apart various blood-related diseases. It goes beyond "Vlad was a guy with a penchant for stabbing people with sharp implements." There are some genuine historical factoids tossed in with comparisons to Stoker's novel. It doesn't set out to disprove or discredit Stokers' work but give viewers a sort of bibliography of bits and pieces that were accurate while also pointing out exaggerations.

Another fun segue within the film were the real-life vampiric criminal inspirations that came about after the publishing of Dracula including the Vampire of Düsseldorf Peter Kürten whose crimes in of themselves were the inspiration for Fritz Lang's M. A few other criminal examples are tossed about but this thread is pretty quickly dropped in favor of exploring the numerous cinematic adaptations from the original appearances in Nosferatu to Bela Lugosi as the titular blood-sucking vampire during his run for Universal Pictures. As fun as this movie trivia is, this is where the documentary loses a little bit of steam. While it showcases other adaptations beyond the most famous, this does start to feel like a puff piece to highlight and market the Hammer Dracula movies featuring Christopher Lee, the last released before this film was The Satanic Rights of Dracula.  You can forgive the filmmakers a little since their narrator is the man himself, but 90% of the cinematic examples given come from one Christopher Lee appearance or another.

But if too much Christopher Lee is my only real complaint about this documentary, there's nothing really to complain about! Lee is an iconic Dracula presence. While he may have been versatile on stage and screen - the man fought Captan America! - Christopher Lee is best known and remembered today for his efforts as the most notorious of blood suckers. This movie easily could have been content to highlight only Christopher Lee's latest appearance in the role; I appreciate it went into the history and myth of vampires and drew examples for various inspirations. I came out of this viewing feeling like I learned something while I was entertained. I don't normally tend to revisit documentaries for multiple viewings - once is usually enough, but this one I'm already eager to peg back through it if nothing else than to listen to Christopher Lee talk about something while I get some work done!

In Search of Dracula arrives on Blu-ray courtesy of Kino Lorber Studio Classics in a single disc set. Pressed on a Region A BD-25 disc, the disc is housed in a standard sturdy Blu-ray case. The disc loads to a static image main menu with traditional navigation options.

Sourced from a new 2K master, In Search of Dracula is far from cursed in the video department with this pleasingly filmic 1.37:1 1080p transfer. As this film uses scenes and images from a variety of sources - silent films, newsreels, and numerous shots from several Christopher Lee Dracula movies - the detail range and film grain appearance aren't uniform but overall pleasing - even if these clips have been reframed from their original aspect ratio to fit the 1.37:1 presentation here. Black levels are decent, a bit hazy here and there, but again that's all subject to the material on screen - the actual location shots near Vlad's castle and other infamous locations of vampire lore and myth appear with the desirable detail levels and image depth. There are only a handful of shots of Lee speaking directly to the camera - which is okay since the bleak gray background actually makes it look more like a hostage video. All in all, this looks pretty damn good with only very mild speckling.

In Search of Dracula is packaged with a respectable DTS-HD MA 2.0 audio track. As Christopher Lee is the narrator, his deep baritone voice is the primary audio element. Even when clips from the various Lee Dracula movies appear on screen, they're almost always spoken over - or alternate music is used. Some of the lifted music cues are actually from Wendy Carlos and Rachel Elkind's score for The Shining. That was kinda distracting for me because the music pulled me out of the moment as I tried to remember why it was so familiar. This isn't a dynamic track with lots of atmosphere - simply dialogue with some mood music to set the scene.

The only bonus feature of note is an audio commentary featuring film historians Lee Gambin and John Harrison who do offer plenty of background about the film, the production, and a little fact-checking about some of the historical tidbits. It's a decent listen but maybe not altogether necessary to complete your experience with this one.

Perhaps best described as an incredibly well-produced bonus feature, In Search of Dracula offers horror genre fans and vampire loves an interesting and informative 82-minute dive into the lore of Dracula and the vampire myth origins. It's very interesting material that in a relatively short period of time sets about to cover a lot of ground from fact to fiction and everything in between. If you love Dracula - in particular Christopher Lee's take on the sun-adverse fictional figure, this documentary is worthwhile viewing. Kino Lorber Studio Classics delivers the film in fine shape with a solid A/V presentation. Because of the nature of the film itself, it may not be the most beautiful looking thing out there nor something that features the most dynamic or atmospheric audio - but it gets the job done and I had quite a bit fun with this one. Recommended.