Elvis Presley brings Rock 'n' Roll to New Orleans in King Creole with teenage angst, delinquency, and Walter Matthau as a mob boss and Carolyn Jones as the sultry damsel in this cautionary tale! It's a C-movie moral movie with A+ style and direction from Casablanca helmer Michael Curtiz and Elis' infectious charms and tunes. King Creole makes its Blu-ray debut courtesy of Paramount's new catalog-focused Paramount Presents line sporting a new 4K-sourced restoration, a pair of solid Dolby TrueHD audio tracks with a slim but nice pair of bonus features. It may not be the best film ever made but it's a great watch, Recommended.

Elvis Presley is Danny Fisher - a troubled youth who keeps getting held back from graduating high school because he's too busy taking odd jobs to support his sister Mimi (Jan Shepard) and directionless father (Dean Jagger). Working as a busboy in a seedy New Orleans nightclub puts him in the sights of dueling club owners - the legit man Charlie LeGrand (Paul Stewart) who owns the King Creole club, and local gangster Maxie Fields (Walter Matthau). As Danny struggles to walk the thin honest line to earn a buck singing to crowded clubs, Maxie's main squeeze Ronnie (Carolyn Jones) is the only one who knows the boy's perilous position and the danger he's in. 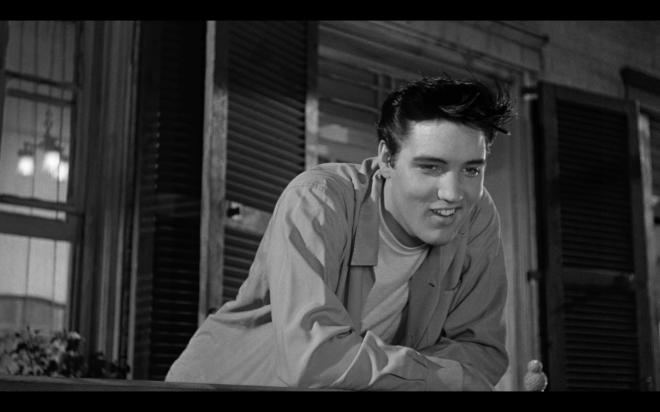 King Creole as a story sits squarely in the sort of after-school special moralizing melodramas. Stay in school kids, don't buck authority, or you risk a greater career and an upstanding life in society. While this is certainly the thin nuts and bolts of the movie, director Michael Curtiz with screenwriters Herbert Baker and Michael V. Gazzo craft a drama that's actually engrossing. To top it off, Elvis himself is no slouch here. Reportedly his favorite role, he carries the film with gusto easily moving from pop tunes to drama. On top of that, we get one of the best performances from the late great Carolyn Jones better known for her time in the Addams Family and House of Wax. Even an early turn from Walter Matthau as the heavy makes you forget the man's natural comedic presence. It may run a little long in the tooth in some places, but the film wins the day as something more than a showpiece for Elvis to sell his image and a few more records.

Not growing up in an Elvis house - we were Beatles people - I discovered The King later as an adult working hard time in retail at a mall media shop. We had a regular visitor who always came in looking for the latest Elvis movie on DVD to add to her collection. She was a sweet old gal who was a wonderful visitor making any day she came in a good one. One day she weaseled out of me that I hadn't ever seen any of Elvis' movies or really listened to any of his music. In that moment she made me open up one of our used compilation discs and play Elvis in the store. With so many years passed, I've sadly forgotten this lady's name, but I owe it to her for making me an Elvis fan. His movies aren't always amazing, but King Creole is easily his best work.

King Creole arrives on Blu-ray for the first time thanks to Paramount Pictures and their new Paramount Presents premier line of catalog releases. The disc is housed in a clear case with cardboard slipcover with spine number 2 that opens up to reveal the film's original poster artwork for the film. The disc loads to a static image main menu with traditional navigation options.

As the mission statement of the Paramount Presents line states - this 1080p transfer is sourced from a new 4K restoration appearing in the film's original 1.85:1 aspect ratio - not the more common 1.37:1 negative ratio. Shot in black and white in New Orleans - from the first opening number with the various vendors singing their various wares, this is a beautiful looking image! I dearly wish this had been offered on a full 4K UHD Blu-ray as that format is the only way this film could look any better! Frame one opens with beautiful details and organic film grain giving the image a naturally film-like visual presence. Blacks and whites are perfectly captured giving the image a full range of light and dark with beautiful shadows in between. There's some very mild speckling here and there, but otherwise, this is a spotless image. For a film that was shot over 60 years ago - it looks practically brand new! Elvis fans will have something to be very happy about with this release.

King Creole rocks its way to the screen with two solid audio tracks giving fans a choice of how they want to enjoy this film - first is a solid Dolby TrueHD 5.1 mix that checks off all the key boxes for dialog, sound effects, score, and Elvis' show numbers. All in all, this is a great mix, but a tad uneven as I felt like I had to keep a thumb on the volume to account for the movement from the music numbers to the quieter drama bits, and then back again when the music starts up. However, while there isn't a lot of dynamic surround activity, the added channels offer some nice spacing and imaging really opening up the New Orleans sets and streets.

Your second option is a newly restored Dolby Digital Mono track. This one is better balanced between the music numbers and dialog - but it's much more confined. It may be a more organic experience for the film itself, but it does miss the open spacing that the TrueHD 5.1 track had to offer. Both are solid tracks regardless of which one you choose to roll!

King Creole only comes with one true bonus feature and that's the conversation with movie critic Leonard Maltin - which is great, but not a huge draw. Not really a bonus feature exactly but the scene selection menu specifically marks where Elvis belts out a tune so if you're in it just to see the King do his main thing, this is an easy navigation tool.

Thanks to Paramount's new focus on catalog titles with the Paramount Presents label, King Creole finally makes its Blu-ray debut. Easily Elvis' best performance, the simple story avoids a number of melodramatic traps thanks to a smart script, excellent direction from Michael Curtiz, and a committed cast. It's wild to see that Elvis was a solid dramatic actor and could perform alongside the likes of Walter Matthau, Carolyn Jones, and Dean Jagger with natural swagger and charm. King Creole lands on Blu-ray with a splendid 1080p transfer and a pair of solid audio tracks. I wish the bonus features were a bit more robust. All in all, if you're an Elvis fan this is well worth it - if you're looking to find a new flick for the night, this is an entertaining jaunt. Recommended.