The Outsider: The HBO Series

Stephen King continues his cinematic resurgence with an adaptation of his recent novel The Outsider as a 10-episode series event from HBO. From creator Richard Price, this excellent adaptation expands King's themes and characters into a fitting series that always maintains tension and dread as a slow-burn detective procedural into the supernatural and terrifying. Starring Ben Mendelsohn, Mare Winningham, Cynthia Erivo, Julianne Nicholson, and Jason Bateman; the show proves yet again that a smart series is often the best way to adapt a Stephen King novel - of any length. Warner Brothers delivers a first-rate Blu-ray release with an excellent A/V presentation and some decent enough bonus features. Highly Recommended.

When I was a kid in the 80s, if you threw a quarter in your hometown video store it'd be sure to bounce off at least a few Stephen King adaptations. From Carrie to The Running Man - King's novels and short stories were being made into entertaining churn and burn movies as well as some thoughtful well-executed TV miniseries. Others were just pure crap you'd rather didn't exist at all - looking at you The Tommyknockers. In the last few years, Stephen King's work is enjoying another resurgence on the big screen and television. The Outsider from HBO is just one of the latest - and possibly greatest adaptations to come down the pipeline...so far this year, month, week, decade. 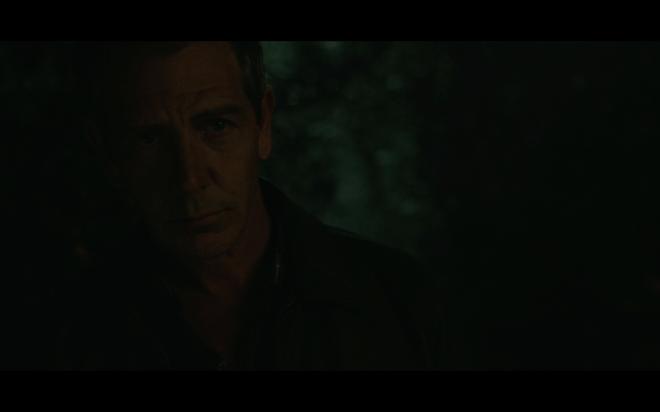 I was an avid Stephen King reader in my youthful years. The Shining was the first "adult" book I read when I was barely into the sixth grade. Not long after I was burning through Pet Sematary, his short story collections, and then Desperation was the big book I couldn't put down in the seventh grade. As I would read large tomes like It or Needful Things - I would peg through their cinematic counterparts and would either be let down by the adaptation or appreciate the changes made to make the story work as a movie. The ending of Needful Things is a big example where filmmakers needed to break away from the text and try something different. The book's ending was just goofy.

The Outsider as a novel wasn't the largest or most unwieldy of King books, in all honesty a two-and-a-half-hour movie probably could have done a serviceable job with it. But thankfully Richard Price with executive producers Jason Bateman, Dennis Lehane, Marty Bowen, and Jessie Nickson-Lopez among others on the writing and directing teams did The Outsiders right. They practically gave every page of the book a minute of screentime in this series. Structured within the narrative of a classic detective story we have Ben Mendelsohn as Ralph Anderson - a small-town detective mourning the death of his son who is now faced with a horrible murder and mutilation of a local child. Given a trove of evidence, he arrests the only man who could have done it - English teacher and Little League coach Terry Maitland (Jason Bateman). Only Maitland has an ironclad alibi that puts him far - far out of town at the time of the murder. With matching fingerprints and video evidence placing Maitland at both locations at the same time - how can that be? As Ralph starts picking away at the evidence eroding his confidence he arrested the right man, he's faced with a solution that can't be rationally explained.

Given this was a Stephen King book - there was no way The Outsider would be that straightforward. King wove his tendencies for the supernatural and unexplained with a deft touch - but I have to say the makers of this series did it a bit better. While I thought the novel managed to explore themes of grief and loss well enough, the series makes it a central point long before its ever concerned with the it that caused the pain. The show is much more interested in how tragedy doesn't just affect one family, but all family members connected - and even the town as a whole. The fear and the dread of the show don't come from only the creature lurking in the shadows but the lingering looks and whispers from your neighbors.

Worry not horror fans, things don't stay strictly contemplative and meditative for long. Horror and creepy elements start to stack up pretty quickly so that by the time Cynthia Erivo's take on Holly Gibney arrives on the scene, you're fully entrenched in some genuinely creepy and unsettling stuff. It's at this moment the series starts to feel like a balance of It with Twin Peaks - only without any humor. The thing I loved about this adaptation over the book was how they expanded characters and their personalities - and even created a few new characters to facilitate that. If you hadn't read Mr. Mercedes you'd be at a loss with Holly Gibney as she's written in the book. She needed expanding here in ways the book didn't provide. Which brings us to the ending. 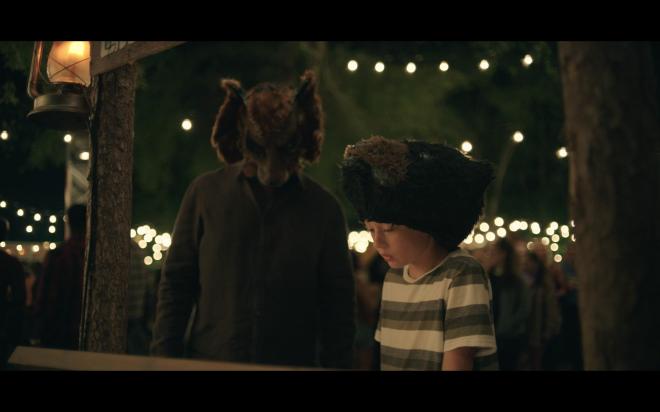 Don't worry no spoilers here, but one of the essential pieces of adapting a Stephen King novel is taking a serious look at how well the end of the book works. Sometimes it's great like The Green Mile or the original Pet Sematary and not a whole lot of tweaking or expanding is needed. But then you get It: Chapter Two or even The Shinning and you have to figure out a way to make something that isn't only satisfactory and fulfilling to the audience - but actually makes sense. Or you expand on the ending like The Mist and absolutely crush your audience. The Outsider was faced with that dilemma - again you would need to know Mr. Mercedes to get what's going on in the book but even then it's rather goofy. This show certainly offers a better ending, but it's also a bit anticlimactic given events that immediately happened just moments before.

If I have a genuine complaint about this series event - and it's one I tend to have for a lot of shows like this - ten episodes were too many, eight would have been enough. By the time we're reaching the final three episodes, there's been so much buildup to events that when they happen some of the wind has been sucked out of the sails. An established ticking-clock element loses some urgency. Why do they have to get to a particular place immediately when it already took this long to get to where they are? Shave off a few extraneous beats, move things around a little, and I got a hunch this would have set a new benchmark for King adaptations.

As it stands, The Outsider is an imperfect but very rewarding horror creature feature disguised as a slow-burn detective procedural. Even when I wanted the pace to speed up a bit, I was still hooked and didn't want to leave the characters. Even knowing the plot from reading the book, I was impressed with how the series creators managed to keep mounting suspense and make it all feel fresh. There may be room for a sequel series - so we'll just have to wait and see what happens next. For now, this is an entertaining series event well worth picking through

Warner Brothers unleashes The Outsider to Blu-ray as a three-disc Blu-ray set with digital code. The discs are housed in an eco-friendly case with a cardboard book-style slipcover. Each disc opens to a static image main menu with standard navigation options allowing you to pick an episode or play all.

Every episode of The Outsider shines with an often gorgeous 1080p transfer. Apparently captured digitally, I can't find information about the finished digital intermediate, but I wouldn't be surprised if it was in 4K - it's just a damn beautifully drab show to look at. Deep olive-greens with light blues and dark shadows dominate the color pallet. This isn't a "happy" show so the color design scheme reflects that. As such primaries take on a bit of a muted tone, blues are a bit darker, yellows have more of an orange-like glow, reds are much more crimson presence - but it all works for this show. Skin tones are healthy and accurate. Facial features, costuming, and production design all get their time to shine on screen. Black levels are wonderfully deep and inky with nice creepy shadows. There's a great jump scare early on in a barn that was damned effective since the only light was a flashlight. Depth is appreciable in every episode making this another terrific release from HBO.

I loved the sound design of The Outsider. Every episode enjoys a robust and active DTS-HD MA 5.1 audio mix that blends a terrific amount of surround activity with distinct object placement. When the titular creature is speaking to his familiar or eating it's latest meal, the creepy gristly sound effects have distinct channel placement. There's not always a lot going on in the sound design - at least nothing to draw attention to itself, but it's always active and engaging. Even when it's a simple conversation between two people there's an atmospherical effect to keep the channels moving and provide some background imaging. I loved the haunting and ominous score from Danny Bensi and Saunder Jurriaans and I really wish I could find a copy of it, but it doesn't look like it's been officially released yet. All of the elements come together to craft a nice and creepy soundscape that lends its services to the ominous visuals.

Bonus features for The Outsider may be a bit on the skimpy side of things, most of it is all talking-head EPK material, but there's some decent stuff here. The best content is in the Inside Episodes segments found within each disc. They're at least tailored for the individual episodes and relevant to what you just saw on that given disc. I wish we had some episode commentaries, that would have been great. For what amounts to barely an hour, it's material worth going through once.

I always walk into any Stephen King adaptation with a little bit of hesitation. Even if I haven't read the book, there are just some really bad TV series and movies out there - looking at you soulless Pet Sematary remake. Other times you get a true gem that works. I really enjoyed the novel so when HBO announced they were tackling The Outsider I was really excited and I'm happy to report the show doesn't disappoint. It leans into the police detective procedural structure allowing the audience to learn more about the monster with every piece of evidence. It could have been shortened by an hour or two and work a bit better, but I was still hooked from start to finish.

This very binge-worthy show gets a great Blu-ray release. Ten episodes spread over three discs, the A/V presentations for each episode are fantastic with amazing visuals and moody atmospheric sound design. Bonus features are informative, but they're very light and mostly just the simple EPK materials. If you're in the mood for something creepy and are willing to take the time for it to build with its intentional pacing, The Outsider doesn't disappoint. Highly Recommended.