The story of Alan Moore and Dave Gibbon's Watchmen continues on HBO under the eye of writer Damon Lindelof. Amazingly enough, the neigh-impossible task of crafting a worthwhile sequel story arch for one of the most revered graphic novels comes together relatively without a hitch. New masks populate the screen and a less-global more closely urgent story keeps the focus grounded using only a couple reoccurring characters. Maybe not perfect, it's a worthy follow-up to the comic and worth the time. Warner Bros. delivers Watchmen to Blu-ray in a three-disc set with terrific A/V presentations and some halfway decent bonus features. Highly Recommended.

30 years after the intergalactic incident that saw a gigantic alien squid decimate New York City and kill over 3,000,000 people - 100 years after the Black Wall Street Massacre - Angela Abar AKA "Sister Night" (Regina King) is a deputized member of the Tulsa police department. Having survived the targeted assassination of Tulsa police officers at the hands of the Seventh Kavalry - a cult of white supremacists who worship the journal of the vigilante Rorschach and have taken on his likeness - cops hide their faces behind yellow masks. When police chief Crawford (Don Johnson) is found hanging from a tree from apparent Seventh Kavalry retaliation - Sister Night and her cohort Looking Glass (Tim Blake Nelson) along with F.B.I. agent Laurie Blake (Jean Smart) slowly uncover an insidious plot that dates back to the Black Wall Street Massacre - and Angela's own family history of masked vigilantes. 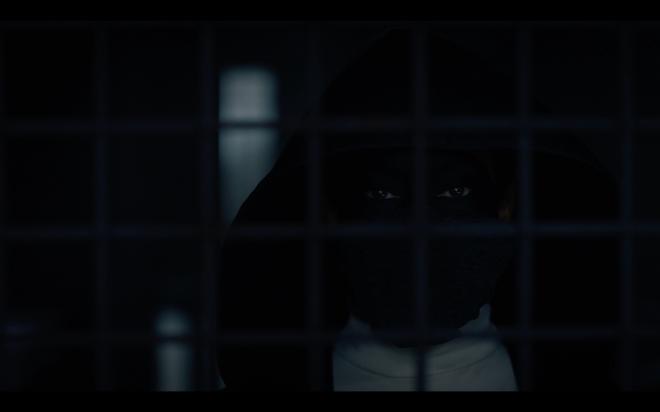 While I know episode breakdowns are abundant and numerous plot details have been discussed all over the interwebs - I'm trusting there may be someone out there reading this review that hasn't seen HBO's Watchmen. So, I won't be going into too many details to preserve some of the show's more impressive plot twists. A lot happens over the course of these nine episodes and I wouldn't want to spoil it for anyone.

Before I start to critique this show, I'll start by saying I'm not much of a fan of Damon Lindelof - at least I wasn't until Watchmen. He certainly can construct intriguing plot ideas and twists worthy of exploring for a few episodes of any given show or for an hour or two of a movie - but they almost always lead to a lackluster or downright silly finale that made you question why you even bothered to get to the end. Star Trek Into Darkness, Cowboys & Aliens, Tomorrowland, or the final three or four seasons of Lost. I would consider each of those a hot mess of great ideas for setup that don't lead to a satisfying payoff. This time around - I found myself appreciating virtually every turn Lindelof brought to this series.

I asked "why?" when I first heard HBO was even considering a Watchmen spinoff series. Then I started hearing good things - and I started to ask "well, how good could it be?" It turns out - pretty damn good! Watchmen - given the comic's serialized nature - always felt like it'd work best as a series, but after the film, it seemed pointless to go back to that well. By setting this new series 30 years after the original comic's ending, this show is able to examine new areas of the world created by Alan Moore and David Gibbons without treading on their printed legacy. If you loved the comics but hated this show - that's fine you can dismiss it as a non-canon fan film. If you loved the show - this is simply a cinematic sequel to the comics albeit made without one of the key creator's input. Such as it is, as each episode unfolded I was surprised at how well it worked as a standalone show and how well it worked alongside the original comics.

One example I dissected over and over - even going so far as to pull out my copy of the graphic novel for reference is Will Reeves (Louis Gossett Jr. / Jovan Adepo). The revelation of his character's secret vigilante identity was a pleasant surprise that actually worked! It was one of those revelations that at first, I couldn't quite buy, "that's not in the comic!" But as I read through the comic again, digging through the lengthy bits in Mason's memoir, I was happy to see that new revelation holds up. It gives the character from the comics a believable worthy origin story. Certainly explains the outfit! There are a number of other moments like that in the series where at first you are in disbelief - but then it knits together so well that it works. It's clear a lot of care was made to not dismiss the printed issues that came before this show.

If I have a genuine criticism of Watchmen the series is that it's only nine episodes instead of ten. For seven episodes, this show moves with a deliberate pace opening doors and examining new plot points and character arcs. We had Adrian Veidt (Jeremy Irons) living in a utopian prison desperate for escape. We have Laurie dealing with her past in a bitter present that finds her hunting down masks just like the one she used to be. We have Angela dealing with her own past as a police officer and her family legacy topped off with the enigmatic Lady Trieu (Hong Chau) who has her own plans to benefit mankind. Those first episodes were well-paced and moved along beautifully allowing for story beats to ruminate.

When this show needed to find its ending - it gets there fast breezing through some big reveals without quite enough time to fully digest what is going on and the twists. Overall, the ending works well - I'm pleased to report - but I would have liked more time to appreciate what led to those final moments. And those final moments are something. If there is never another season for Watchmen - that's perfectly okay. This was enough. The final shot leaves a door open to explore more - but it's perfectly okay if they never make that journey.

Watchmen arrives on Blu-ray from Warner Bros. in a three-disc Blu-ray + Digital set. Housed in a standard three-disc eco-friendly case with a cardboard slipcover, the discs load to a static image main menu with traditional navigation options. Also included is a booklet containing brief episode descriptions.

Apparently finished on a 4K digital intermediate from 3.5k digital elements, Watchmen marks an impressively detailed and colorful show to life in 1080p - as just about every HBO show should! There's so much small detail in the background of each scene that you need to be able to see everything to soak it all in. Each episode practically demands multiple viewings just for all of the references to the original comics but also hidden character traits for various masked heroes - and villains. If you really pay attention to some scenes and what's on bookshelves or desk shelves - you'll notice some of the character revelations before they happen. If not the big reveals, you know certain characters are more than what they seem. Black levels are rich and inky giving each scene a welcome sense of three-dimensional depth. Episode 6 is nearly all black and white offering rich textures and a sharp grayscale giving plenty of shadow separation and shading. Colors are bold with rich dynamic primaries - the bold yellows of the Tulsa police masks offer a vivid contrast to their black uniforms. From start to finish each episode enjoys a terrific transfer. The only way this could look any better is if Warner Brothers would offer up a true 4K UHD experience with HDR.

Every episode of Watchmen comes packed with a spacious and effective DTS-HD MA 5.1 audio mix. Each episode offers up impressive usage of surround channels. It's not all action-packed - sometimes it's just a simple dinner party - there's always something going on with distinct imaging. The first time Hooded Justice makes his entry during the store holdup sequence - it's pretty wild. You have broken glass coming out of the front/center, screams on the sides/rear, gunfire from the left, meaty smacks and punches to the right - it's a terrific sequence. The whole show rolls like that with the dynamic staging of the sound elements. Dialog is clean and clear throughout. This is to say nothing of the sonic delight that is Trent Reznor and Atticus Ross' score. I'm glad it's easily available because I can't stop listening to it. Levels are spot-on throughout without any need to adjust or monitor.

Spread out over three discs, Watchmen has just about two hours of bonus features - half of which is pretty disposable EPK talking head nonsense that doesn't really go into much detail about the show. Your best bonus features here is the New York Comic Con panel, Watchmen: Unmasked, the interesting but all too brief Squid Shelter hosted by Tim Blake Nelson, and the Hooded Justice and Adrian Veidt chunks. Nothing else lasts long enough to be appreciated.

As a fan of the original comics and someone who appreciates but doesn't love the movie - I was very skeptical about Damon Lindelof's Watchmen. Especially because it was a Lindelof show. To my surprise, this is the sequel series to the comics I never knew I wanted. A lot of time and care went into crafting show between the references to the comics, the expansion of some characters, as well as the new world we find our new heroes occupying. I liked that it made me want to go back and revisit the original graphic novel in a way to see how well new revelations worked - that proved to be a fun nerd moment I haven't had with a comics-inspired show or movie in a really long time. It should be no surprise that HBO's Watchmen is given a first-rate Blu-ray release with splendid video transfers for each episode along with impactful audio mixes to match. Bonus features could be a bit better - but there are some gems in the mix. Easy one to call Highly Recommended.