The sins of the father come full face to the son in Come to Daddy starring Elijah Wood and Stephen McHattie. A potboiler of a son reuniting with his absentee father boils over when Dad's dark past comes back to haunt them both with a parade of colorful characters. The film starts out strong, but it loses steam as the plot twists and turns come rolling in. Still an enjoyable show and worth the time for the performances alone. Featuring a great A/V presentation, there aren't any actual bonus features. All in all the show is fun if you like a grim sense of humor. Worth A Look.

Norval Greenwood (Elijah Wood) is about to meet his father for the first time. Over thirty years earlier, his father abandoned him and his mother. After getting a letter in the mail with a convoluted map to where his father lives, he sets out. When His father (Stephen McHattie) opens the door, Norval is taken aback. The two slowly start to bond, only for everything to go south - fast. As Norval discovers his father isn't the man he thought he was, a parade of unsavory types with axes to grind start to appear. 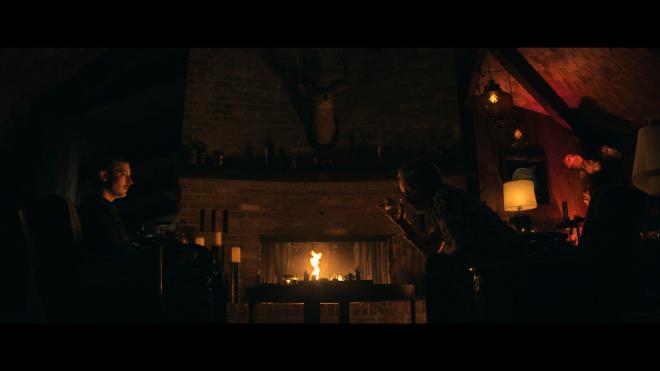 Directed by Ant Timpson from a screenplay by Tony Harvard, Come to Daddy starts out as a highly entertaining potboiler of a thriller. Two men in an isolated location with a strained history. Each man with their own set of secrets and when the truth comes out it leads to some pretty damn tense interplay between Elijah Wood and Stephen McHattie. The two work incredibly well off one another and very quickly you buy into their strained relationship. You know right away this isn't going to be a picture-perfect family reunion.

The make it or break it point for Come to Daddy hits about midway through the movie when the first set of plot twists start to land. I wanted a tense conversational thriller between two people stuck in an isolated location. When the movie moves away from that setup and opens up the cast of characters and locations, you're either going to be on board for the hyper-violent grim and grotesque sense of humor - or you're going to slide out of it pretty quick. I'll give the filmmakers and the additional cast including Michael Smiley, Madeleine Sami, and Martin Donovan all due credit for gumption, but final execution is touch and go.

This sort of violent dark comedy is a tough balancing act. You're either going all in or not at all. Half-measures rarely stack up to a satisfying finale. There's one particular kill involving a barbecue fork and an unfortunate part of male anatomy that could have actually been funny had it been in a different movie. In contrast to something recent like Lowlife where it goes all in dark depraved humor right away, Come to Daddy doesn't quite know how or where to balance the shock with the funny. Like horror/comedy - if the ingredients don't gel you don't get Jell-o.

That isn't to say Come to Daddy isn't entertaining. I found most of it very entertaining, but not as satisfying as I'd have liked to see. That first half is what does it. It's so good seeing Wood and McHattie play father and son with this strained history where they're regularly calling bullshit on one another. This escalates to a tremendous boiling point with a shocking twist that spirals the movie into a creepy psychological direction. But it doesn't sit there long enough. It goes into another direction and then another and the creativity decreases with each new twist.

Lionsgate releases Come to Daddy to Blu-ray in a single-disc Blu-ray + Digital set. Pressed on a Region A locked BD-25 disc, the disc is housed in a standard eco-friendly Blu-ray case with identical cardboard slipcover artwork. The disc loads to trailers for other upcoming Lionsgate releases before landing at an animated main menu with traditional navigation options.

Come to Daddy arrives with a picture-perfect 1080p 2.35:1 transfer. From the opening scenes to the intricate house to the deep inky blacks - this movie looks stunning on Blu-ray! Details are terrific allowing you to soak in everything on screen from the scenic locations to facial features - there's a ton to see here. Colors are bright and bold with wonderful primary saturation. Black levels are deep and inky - there's a great amount of shadow saturation throughout the darkest scenes and most of the film does play at night or in low light levels. A welcome three-dimensional vibe soaks through. All in all, this is a terrific-looking transfer.

Come to Daddy lands with an effective DTS-HD MA 5.1 audio mix. A lot of the film falls into that potboiler sense of dialog-heavy interplay without much in the way of dynamic action-fueled sound effects. There are moments where the action kicks up and takes over the mix but most of the time the side and rear channels are regulated for establishing and maintaining atmospherics. It's in these moments where we get some nice LFE effects to ramp up the tension. Throughout dialog is clean and clear and levels are on point. All in all an effective mix.

No bonus features of any kind beyond the trailers for other Lionsgate releases.

Come to Daddy was the sort of smart sleek concept movie that had a great introductory premise but overplays its hand in the long run. It is an entertaining film, but it wasn't as satisfying as I'd hoped. With that, like the one ring -  Elijah Wood carries the film to the end. It's worth watching just to see what he's up to these days.

Lionsgate delivers Come to Daddy to Blu-ray in a single disc set sporting a terrific video transfer and an effective audio mix. No bonus features to speak of whatsoever. The film may not be the best out there, but if you're cooped up and need something entertaining, give this a try. Worth A Look.