Bong Joon-ho's black comedy Parasite is a masterfully-told allegory with deeper insights lurking beneath the surface inviting further study and conversation. The thriller moves into a new home courtesy of The Criterion Collection, furnished with a gorgeous black-and-white edition of the film along with the original color version. Accompanied by the same excellent Dolby Atmos track and a wealth of bonuses, the overall package is Highly Recommended. 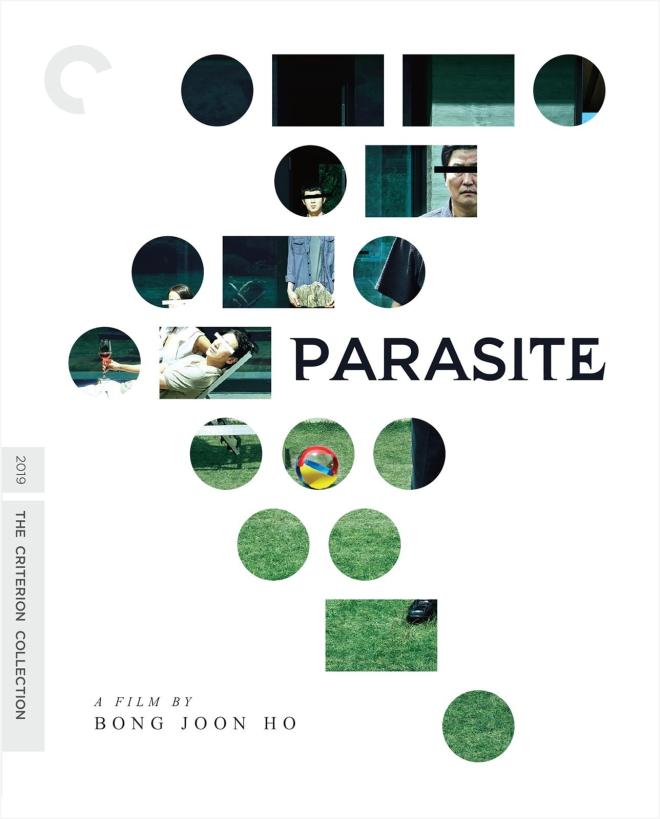 In Parasite, Bong Joon-ho compares and contrasts a pair of families on polar ends of the social-economic hierarchy of contemporary society. The South Korean filmmaker displays artful restraint, as he stoically introduces audiences to the Kim family (Song Kang-ho, Choi Woo-shik, Park So-dam and Chang Hyae-jin) living in literal squalor in the basement of an apartment complex. By sharp contrast, the Park family (Lee Sun-kyun, Cho Yeo-jeong, Jeong Ji-so and Jung Hyeon-jun) are meant as the epitome of class and wealth, living in a spacious house comfortably situated in a clean, uncrowded neighborhood away from the ills and hardships of the lower class. However, there is something shrewdly writhing beneath the surface of this picture-perfect nuclear family, particularly in their fetishized fixation on American culture while makes the Kim's corruption more apparent and out of necessity.

Watching the story ominously unfold, we admire Bong's meticulous camerawork moving vertically with suggestive weightiness, seeing the Kims always descending stairs but only ascending in the company of the Parks. The second half of this modern masterpiece is a bizarre reveal, touching on other ideas we're left to unpack, questioning who's the real parasite in this contemporary class warfare. This masterwork is a bleakly deadpan but sophisticatedly subtle commentary on the modern capitalist world. It as much a piece of art as it is a wildly entertaining black comedy that squirms in the mind with lingering ideas and abstract impressions that welcome various interpretations and deep, academic study.

For a more in-depth take, check out our review of the 4K Ultra HD edition HERE.

This two-disc Blu-ray edition of Bong Joon-ho's Parasite comes by way of The Criterion Collection (spine #1054). A pair of Region A locked, BD50 discs sit comfortably atop one another and housed inside a gatefold plastic tray that comes with a side-sliding slipcover. It also includes a foldout-page booklet featuring a thoughtful analysis by media and culture critic Inkoo Kang of The Hollywood Reporter. There are no trailers before being greeted by the standard menu options and a splendidly animated screen with music. 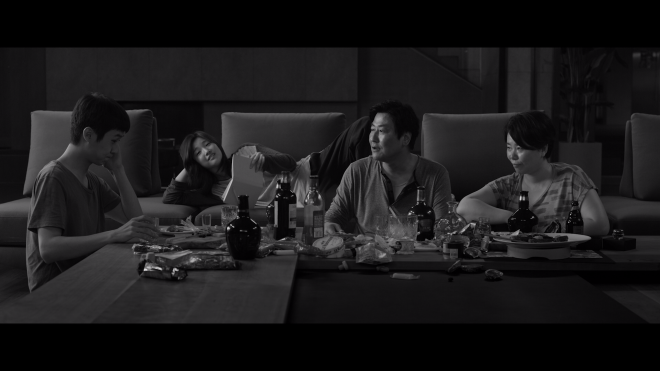 According to information in the accompanying booklet, the 1080p/AVC MPEG-4 encode reportedly comes from the same 4K digital intermediate used for the Ultra HD edition by Universal Studios Home Entertainment. Approved by director Bong Joon-ho and cinematographer Hong Kyung-pyo, the files were struck from the original 6.5K digital source, and like the previous release, the results are immaculate.

The reference-quality video shows razor-sharp details in the expensively-designed minimalist furniture while exposing every grimy imperfection and filthy flaw in the cramped, subterranean existence of the Kim family. The lettering in signs and packages are plain to see, every blade of grass and leaf in the Park's yard is distinct, and facial complexions appear healthy with lifelike textures. Remaining true to Kyung-pyo's heavily stylized cinematography, much of the palette in the color version has a near monochromatic appeal that favors gray tones, steely blues and stony cold teals. However, primaries are nonetheless richly saturated and animated while much of the lighting in the Park household is bathed warm, cozy yellows and oranges.

The transfer also moves into Blu-ray with exceptional contrast and brightness balance, displaying resplendently clean whites and deep, inky blacks from beginning to end. Turns out this is particularly beneficial for the black-and-white version where the plot now carries a thickly ominous and creepily foreboding atmosphere. The photography shows even richer blacks and silkier, velvety shadows, providing the 2.39:1 image with a great deal of depth and a lovely cinematic appeal. Daylights sequences, especially, are more radiant and energetic with an eye-squinting pop and crisp, dazzling highlights, making for a gorgeous alternative. (Video Rating: 96/100) 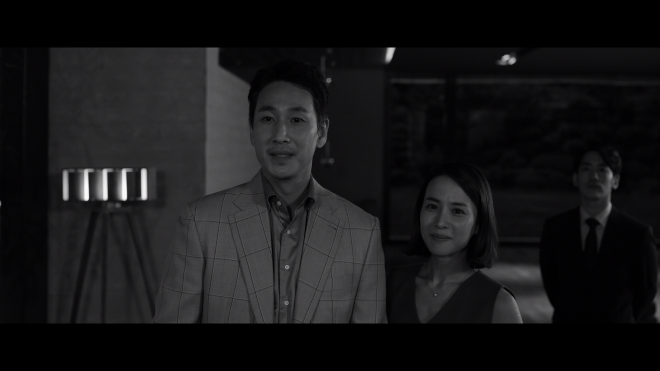 For this Criterion Collection of the masterful thriller, the film features the same excellent, highly-engaging Dolby Atmos soundtrack enjoyed on Universal Studios' 4K Ultra HD edition released earlier this summer. A majority of the attention is spread across the fronts with background activity fluidly moving between all three channels and convincingly into the off-screen space. Several atmospherics faintly bounce into the top heights, impressively widening and broadening the soundstage while other ambient effects occasionally employ the surrounds and overheads, such as the noise of the city, some of the local wildlife, the crack of thunder and the downpour of the rain. Vocals are always distinct and precise, and imaging continuously exhibits superb warmth and distinction in the mid-range, welcoming the listener into this creepy vision of the haves and have-nots with amazing effectiveness. The low-end is mostly reserved for specific moments, appropriately providing palpable weight and presence. (Dolby Atmos Audio Rating: 90/100) 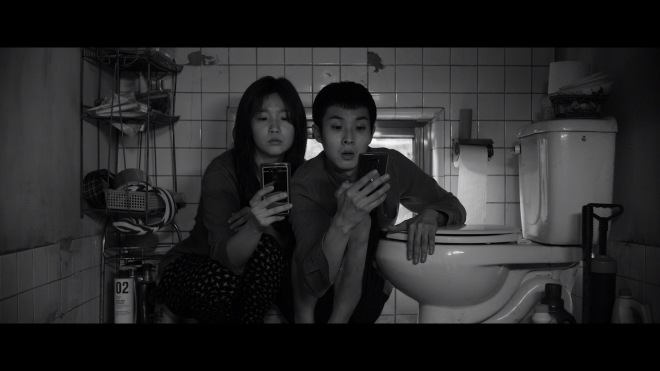 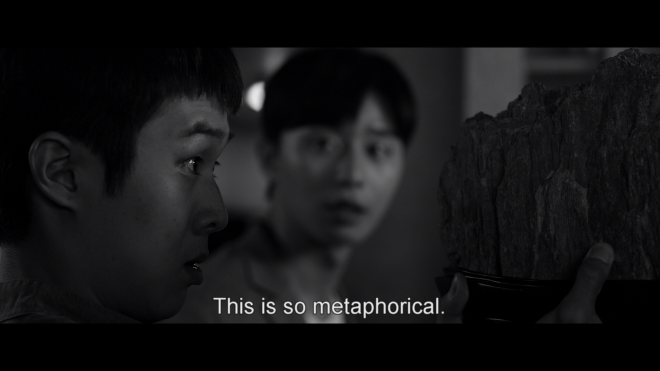 A modern masterpiece from South Korean director Bong Joon-ho, Parasite is a wildly entertaining allegory on contemporary class struggles and income inequality. But lurking beneath the surface of this engrossingly brilliant black comedy writhes deeper layers of insightful commentary on modernity, subtly on display in the methodical, restrained hands of a talented filmmaker. The thriller moves into The Criterion Collection neighborhood, furnished with a pair of brand-new, stunning HD video presentations where the second is a unique black-and-white edition, offering fans an interesting and different perspective on the plot. Along with the same awesome Dolby Atmos soundtrack and a wealth of bonus material to squirm thought, the overall package is a highly recommended purchase.