It's always a little exciting when one of the best actors of a generation decides its time to show off what they can do behind the camera. Some of the time it's pretty good, some of the time you want to clap them on the back and say "well you gave it a try, now go back to what you're good at." Other times you stand up and celebrate. Wildlife is a time to celebrate Paul Dano as a writer and director. Starring Jake Gyllenhaal and Carey Mulligan with Ed Oxenbould as a family destined to blow up their nuclear family in 1960s Montana. A beautiful film gets a terrific Blu-ray release from the Criterion Collection with a wonderful A/V presentation and informative extras. Very Highly Recommended.

Joe Brinson (Ed Oxenbould) is just like any other teenager in 1960. He's trying to figure out where he stands in the world, what his interests are, while also balancing the expectations of his parents Jerry (Jake Gyllenhaal) and his mother Jeanette (Carey Mulligan). Jerry struggles with finding his place in the world and holding a job while Jeanette struggles with her position as the archetypal mother. When Jerry takes a low-paying high-risk job on the front line of fighting a raging wildfire, Jeanette spirals into finding herself as a newly free woman all while Joe struggles to understand what's happening to his family. 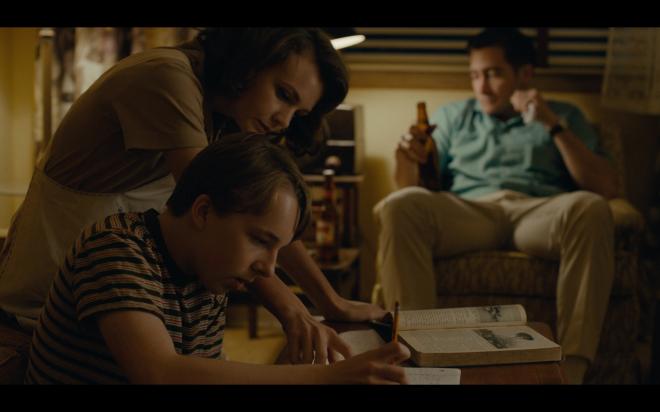 The family drama is a deep cinematic well that filmmakers keep coming back to. The pre-free love and feminist era of the 40s and late 50s is a particularly volatile time ripe with drama where the man's position as the breadwinner was threatened by the rise of working women more than capable to do the work of men - and oftentimes better. Just as important to examine is this fake notion that only the man can be the provider for a family and the emasculating pressure any failure brings. Jerry tries to do right by this notion, but his pride often gets him into trouble. As the family needs to survive the very notion of his wife getting part-time work - or even his son - is a threat but also a mark of additional failure as a provider.

All of these themes and inner workings of parental struggle plays out in front of Ed Oxenbould's Joe against the backdrop of a small rural Montana town. We never really move away from Joe's view. He is the audience surrogate; where he goes we go. As he watches his family slowly drift apart, we experience firsthand his pain and anguish. When he should be paying attention to the attractive girl in his class Ruth-Ann (Zoe Margaret Colletti) that obviously likes, he's working an after school job -  or desperately keeping tabs on his mother's flirtations with a local successful businessman. As his parent's personal conflicts with each other come to a head, he's caught in the middle.

Really if you boil down all of these plot beats and themes there's not a lot here that hasn't been examined before in other films. It's how well Paul Dano manages the story with his cowriter partner Zoe Kazan that makes this feel fresh and unique. I never read Richard Ford's novel this film is based on - I don't feel like I need to now. This is such a personal and arresting film that every internal conflict or character flaw comes to the front with amazing performances from this talented cast. The pacing is purposeful without a single wasted moment. When the camera moves or cuts away it's because Joe sees something or learns something new - and no matter how heartbreaking that thing may be, it doesn't look away.

Outside of Alexander and the Terrible, Horrible, No Good, Very Bad Day, and The Visit - I hadn't seen Oxenbould in anything else. He's gone from being "another kid actor" to being a genuine talent. He communicates with his eyes so effectively that any disappointment in his parents punches hard with just a simple look. Unsurprisingly Jake Gyllenhaal and Carey Mulligan deliver equally compelling performances. I had a funny moment where I realized Jerry is a sane version of Jack Torrance from The Shining aimlessly wandering from gig to gig while Jeanette supports him - literally and figuratively. As things drag on the two parents come to grips with the idea that while they have a child - maybe they shouldn't be a family together.

I'd only heard of Wildlife simply because Paul Dano is a damned talented actor and this would be his directorial debut and I was curious about what he'd offer as a director. As a massive life-long Batman fan I'm extremely excited to see what he does as The Riddler in Matt Reeves new take on the caped crusader. However, I'd be lying if I didn't admit I'm much more interested now in seeing what Dano brings to the screen next as a director or writer. Paired with Kazan - the two obviously work well together dating back to Ruby Sparks. They're amazing on screen in anything they do, but I think their futures are secure behind the camera. I want to see more from them - but I'll be content for now to simply rewatch Wildfire again.

Wildlife arrives on Blu-ray courtesy of the Criterion Collection in a single-disc set. Housed in Criterion's standard clear case, the disc comes with a booklet containing production info, essays, and information about the transfer. The spine number for this release is 1031. Pressed on a Region A BD-50 disc, the disc loads to a static image main menu with traditional navigation options.

Shot digitally and from what appears to have been a 2K digital intermediate, this 1.85:1 1080p transfer is simply stunning. Shot on location in Livingston, Montana north of Yellowstone National Park in the Rocky Mountains - this film captures the splendor of the scenic beauty and small-town rural life nestled in those foothills. Facial features, clothing, the impressive period production design are all on display. Colors are bold offering rich primaries with striking yellows, blues, and reds - the costuming is especially notable in that regard. Image depth is terrific giving virtually every scene, no matter how tight or intimate, a sense of three-dimensional presence. Black levels are on point offering deep inky blacks with on-point shadows and shading. As the camera very carefully moves, you're allowed to fully soak in the imagery and it looks amazing with this transfer.

Just as impressive as the video transfer is the DTS-HD MA 5.1 audio track. Even in rural small-town Montana, there's plenty of scenery atmospheric sound effects to set the stage and keep the channels engaged. Dialogue is clean and clear throughout without any issues. The sound design of the film is deceptively simple but it relishes in that simplicity. Footfalls or a gust of wind captures the movement but also the wide-open landscape of the town. Midway through the film when Joe and his mother visit the forest fire - the raging inferno slowly swells to dominate the mix giving rise to some rather unsettling LFE that rumbles through every channel. Not showy or overly flashy sound design, it does what it should do and heighten the mood of the film and it does that perfectly. Also, the David Lang score is beautiful stuff.

Wildlife doesn't come packaged with a vast assortment of bonus material but what's here is quality stuff. I'd love to have had a commentary track with Dano, but we get plenty of relevant material throughout various aspects of the making of the film with cast and crew interviews. The biggest and probably best feature is the Paul Dano and Richard Ford talk at Lincoln Center as they talk to the novelist and his inspiration for the story and segue into Dano's attraction to the material and his process of adaptation. You're looking at almost two hours of good content here.

When I heard Wildlife was in production and who was making it I was intrigued. Dano is one of my favorite working young actors today as he brings something interesting to every role. I wanted to see what he brought to the screen as a filmmaker. This is one hell of a great opening salvo for a young first-timer. You can feel the personal touch Dano carries with the movie allowing his great cast of Carey Mulligan, Jake Gyllenhaal, and Ed Oxenbould to command their characters. It's an emotional rollercoaster of a family drama that sticks with you long after it's over.

The Criterion Collection brings Wildlife to Blu-ray with a terrific video transfer and an effective engaging audio mix. While this disc isn't bursting with bonus features what's on disc is informative and worth picking through. At the end of the day, this is a movie I'll be glad to revisit again and again - Highly Recommended.