Written, Directed, and starring John Cassavetes, Husbands is an intricate look at the fragility masculinity in the face of eventual death as three friends struggle with their lives in the wake of a friend's passing. Co-starring Ben Gazzara and Peter Falk, the film is hilarious without becoming a farce and dramatic without becoming a soap opera. With intimate personal photography and improvisational performances, the film offers an honest and often uncomfortable take on aging and the quest to recapture youth. The Criterion Collection delivers Husbands with a gorgeous new transfer and audio mix along with a welcome set of new and archival bonus features. Recommended.

"Like I've been telling my wife for years. Aside from sex, and she's very good at it, God damn it; I like you guys better."

Three friends, Harry (Ben Gazzara), Archie (Peter Falk), and Gus (John Cassavetes) have just lost the fourth member of their tight-knit group of friends. Their senses of youthful invincibility shattered, the three men struggle to make sense of what their lives have become as quiet middle-class New Yorkers with families in the Long Island suburbs. Determined to recapture their youthful vigor, they fly to London for a blowout bender where their friendship, as well as their own personal needs to feel alive, will be tested.

A true black comedy of human nature and fragile masculinity - Husbands features John Cassavetes in excellent form in front and behind the camera. The film's close and intimate photography with long often uncomfortable takes gives this movie an edge that few directors of that era could pull off. We watch as three men essentially self-destruct in various ways as they try to rebottle a piece of time that's already long passed. As shots linger and never flinch, your emotions roam from disgust to absolute pity for these guys as some of them fail to come to grips with reality. This may not be where they thought their lives would end up, but they're not the youthful 20-somethings they used to be. The years and mileage have caught up. You want them to come away having learned from the experience but you're not 100% convinced they will - at least not all of them anyway. 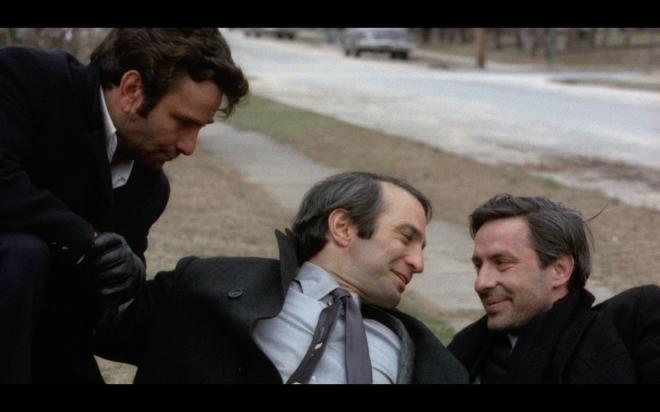 There are many incredible moments throughout this movie where each of our leads is given moments to shine, but as a collective trio, their best moment is their beer-fueled singing competition. Challenging everyone at the table to impress them with a song, Ben Gazzara's Harry fixates on the frustratingly inert song his mother-in-law tries t sing. It's a long scene traversing comedy and tragedy as Harry unrelentingly goads the woman to put more heart into the song. Gazzara is unrelenting as a performer here, but it's also a great moment showcasing the three actors working together. As Gazzara plays the uncompassionate hardass, Falk plays the jokester to try and level the situation, Cassavetes ends up the enabler of the three. It's funny and heartbreaking and it takes a long time to finish.

As with so many scenes, Husbands is a long stretch. Scenes go long past the point you feel is relevant but they always land where they aim to go. Falk's Archie trying to pick up women in London is borderline comical if it weren't also pathetic. With his pals, he's forced into trying to get laid with anyone who will give him the time of day when he clearly would rather be at home with his wife. He says he hates his life - but you know deep down he loves it. So, he goes to crazy extremes to participate but not get too involved while regreting every move he makes.

This is my third go-around with Husbands in 20 years and every time I see it, it just gets better. I've read a fair amount of criticism about the movie and I respect a lot of the hits critics take at the film - but I also feel those are first reactions. This is a movie that almost demands multiple viewings to work through your own emotional responses. Parts I think are genuinely funny now - I didn't think were funny the first time I rented this on tape as I was discovering Cassavetes' films. It took a second viewing in college to make me appreciate it, and now I'm a fan. Maybe not his best as a writer/director/actor, but it's impressive all the same. He was a talent to die entirely too young.

As I've gotten older I feel like I get what Cassavetes was trying to say about the bullshit societal expectations and pressures men feel they have to live up to. As a husband and a new father, I'm long past feeling the need for late-night carousing with friends. I look back fondly at those early 20s years, but I don't feel the need to relive it. Even if I could go out and do that stuff - today it'd be a sad and cheap imitation. I don't think Cassavetes was trying to say "Men need to grow up and face responsibility," but I do think he's making the point that you can't have a do-over. You can only go forward. If something isn't working in your life, career, relationship, etc. - you need to find a way to make it work, not relive a life long passed.

Husbands arrives on Blu-ray in a single-disc set from The Criterion Collection. Pressed on a Region A BD-50 disc, the disc is housed in Criterion's standard sturdy clear case with spine number 1029. Included is a booklet with the essay "Vows" by filmmaker Andrew Bujalski with details about the restoration process.

Sourced from a new 4K restoration from the original 35mm elements and the best available alternative elements where the negative was too badly damaged, Husbands is rewarded with an often beautiful 1080p 1.85:1 transfer. There are a few moments throughout where the grain thickens, some of the colors aren't quite as sharp and some slight speckling appears, but these are few and far between. Most of the image is terrific with a nice film-like presentation. Details are robust - especially in close up scenes given how the film was shot with an up-close documentary style. Wide establishing shots can exhibit some inconsistencies with the rest of the film, but again those are short moments and don't really distract. For the most part, black levels are deep and inky with excellent image depth. A few takes here and there the blacks can thicken to almost crush, or lighten so they're not altogether true black. As a whole, this is a great-looking movie. Whatever alternate elements Criterion had to source for this transfer were in overall excellent shape and blend relatively well to the original negative. The inconsistencies I listed above are only small nitpicks that don't really distract from the viewing experience.

Husbands arrives with a clear English LPCM 1.0 audio mix that's crystal clear. Hiss or any age-related issues from previous home video releases are not a problem here. Even through the narrow soundscape, there is a nice sense of atmosphere. This track is at its best with a room full of people - the previously mentioned signing competition is a great example of several people packing a scene with dialog and organic sound effects. There isn't a score to speak of for this film - any "music" is provided by the actors themselves. Throughout, dialog is clean and clear without any issues. Levels are spot on without the need for any adjusting.

True to Criterion Collection form, there is a genuinely worthwhile package of bonus features to pick through. The 2009 commentary from Cassavetes biographer Marshall Fine is a great listen - especially if you're a fan of the Actor/Director's work. He provides a lot of insight into Cassavetes' process and allowances for the cast to improve or adjust dialog to fit the characters as they're playing them. Producer Al Ruban offers some great insights into the film and Jenny Runacre especially offers some notable looks into what she felt Cassavetes was trying to do with the film.

Husbands may not be John Cassavetes' best films, but as the man was keen on examining middle-America ordinary folks, I do feel he was ahead of his time with his look at masculinity as well as the simple idea of getting older. It's funny, it's tragic, you hope for the best with the characters but you're just not sure how they're going to end up. There's always a feeling of impending doom as you wait for the final shoe to fall. Terrific performances from Ben Gazzara, Peter Falk, and Cassavetes keep this film alive and moving without losing intimacy.

The Criterion Collection brings Husbands to Blu-ray with a terrific A/V presentation and a fine assortment of informative new and archival bonus features. If you're a fan, you'll enjoy this release. If you didn't like the film the first time you saw it, give it another look. It's one that gets better as you age. Recommended.