Dance, Girl, Dance showcases the talents of a young Maureen O'Hara and especially Lucille Ball, who provides a preview of the comic dynamo she would soon become. The story of rival dancers competing on-stage for attention and off-stage for the affections of the same man isn't particularly fresh, but Dorothy Arzner, the only woman director in Hollywood at the time, infuses it with a rare feminist perspective that lofts this low-budget production to a higher plane. Criterion supplies typically high-quality video and audio transfers, but extras are surprisingly and frustratingly slim. Though Dance, Girl, Dance may not be familiar to many movie mavens, it remains a charming, aspirational tale packed with plenty of relatable values that deserves to be rediscovered. Recommended.

I can't remember if Kathryn Bigelow thanked Dorothy Arzner in her acceptance speech after becoming the first woman to win a Best Director Oscar, but if she didn't, she should have. As the only woman helming major features during Hollywood's Golden Age, Arzner blazed a difficult trail and brought a unique perspective to a male dominated industry. She may have specialized in "women's pictures," but the stories Arzner tells don't capitulate to a man's view of what a woman should be. With the help of strong actresses like Katharine Hepburn, Joan Crawford, Rosalind Russell, and Sylvia Sidney, Arzner's small yet notable body of work depicts strong, independent women taking control of their lives - for better or worse - and it's fascinating to look back at her films within their contemporary context.

Dance, Girl, Dance would be Arzner's penultimate picture, and by focusing more on character than plot, she transforms a fairly standard, innocuous showbiz yarn into a surprisingly sensitive, highly effective coming-of-age tale. At a time when most young women played by the rules in the hope men would recognize their worth, Dance, Girl, Dance - through Arzner's astute lens - showed audiences just how devastating such a path could be. Female empowerment wasn't really a thing back in 1940, but in an indirect manner, Arzner gives us a preview of what it could and would be. Eighty years later, the film still resonates, because even though we've come a long way, baby (to quote an iconic 1970s ad slogan for Virginia Slims cigarettes), we've still got a long way to go.

Judy O'Brien (Maureen O'Hara) and her friend Bubbles (Lucille Ball) share a New York apartment and dance in a struggling, lowbrow troupe run by Madame Lydia Basilova (Maria Ouspenskaya). Judy is the more talented of the two, but her naïveté, self-doubt, and demure demeanor hold her back and stunt her professional growth. Bubbles is, well, more bubbly, and her go-getter attitude and flamboyant style get her noticed by an impresario who offers her a prime spot in his burlesque revue. 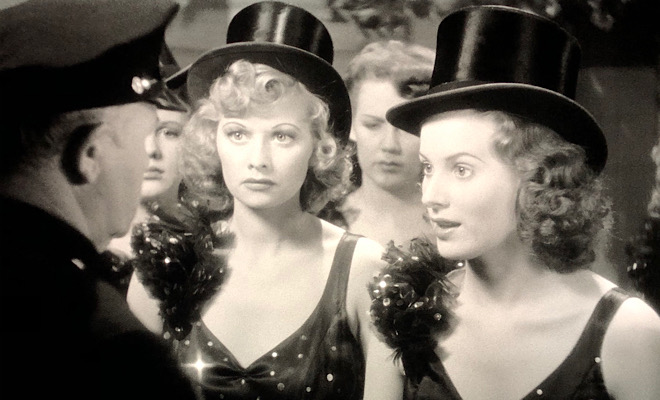 Bubbles takes the money and runs, and her wildly comic striptease makes her a star. Meanwhile, Judy backs out of an audition at a classical studio run by Steve Adams (Ralph Bellamy), believing she's not nearly good enough to dance with such accomplished ballerinas. Instead, she accepts an offer from Bubbles, who has renamed herself Lilly White, to perform a brief ballet interlude in her show. The highbrow routine draws derision from the rowdy, lascivious male crowd, but the manager thinks it's a clever angle and builds an act around it. "Tiger Lilly with Stooge" becomes a sensation, but weathering the boos of the crowd on a nightly basis - even for a lucrative salary - only further erodes Judy's self-esteem, as does a dalliance with a rich playboy (Louis Hayward) who still holds a torch for his ex-wife (Virginia Field). Bubbles likes him, too, but only for his bank account, and after playing second-fiddle to Bubbles and being a doormat for far too long, Judy finally reaches her breaking point.

The plot of Dance, Girl, Dance wanders all over the map, and its hodgepodge mix of comedy, tragedy, romance, and musical numbers both strains the narrative's credibility and threatens to dampen the impact of the movie's important overriding themes. (There's even a no-holds-barred catfight between Judy and Bubbles that just might have been inspired by a notorious brawl between Marlene Dietrich and Una Merkel the year before in Destry Rides Again.) Thankfully, Arzner inserts some contemplative moments and several introspective close-ups to make sure we don't lose sight of the story she really wants to tell. As a result, Dance, Girl, Dance becomes far more than a lightweight musical fairy tale. In Arzner's very capable hands it exudes an irresistible earnestness and quiet power as it captures the essence of a young woman's irrepressible spirit.

O'Hara was just 19 when she filmed Dance, Girl, Dance and had appeared in only two other American films (The Hunchback of Notre Dame and the remake of A Bill of Divorcement). Though Arzner makes the most of her fresh-faced beauty and winsome personality, O'Hara was still an acting novice, yet her often evident inexperience makes Judy's hesitancy and awkwardness feel more authentic. She enjoys some nice moments with the dapper Hayward, but really clicks with Ball, who would become a lifelong friend. 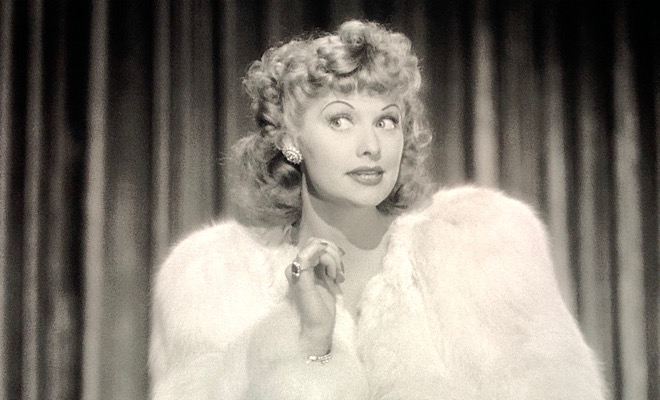 The iconic comedienne was still 11 years away from I Love Lucy and just beginning to make a name for herself after seven years in Hollywood. Dance, Girl, Dance was one of the first films to really put Ball on the cinematic map, and she maximizes every screen moment. Sassy, sexy, tough, and assured, she owns her role and makes Bubbles the film's most interesting character. Her wind blown striptease is an absolute hoot and previews the type of broad physical comedy that would distinguish all of Ball's future TV sitcoms. Her timing is impeccable, too, and she delivers a wisecrack like nobody's business. Once again, credit Arzner for seeing something in Ball nobody else did and finding a way to show it off to its best advantage.

Dance, Girl, Dance is only a trifle, but through Judy's struggle for respect and self-worth, a more meaningful picture emerges. Amid all the hijinks, Arzner argues against the objectification of women and reviles the denigrating hoops they're often forced to jump through to pursue their dreams and achieve success. Dance, Girl, Dance doesn't try to solve such complicated issues, but at least it raises them, and that's a big reason why we're still talking about such a little film so many years later. 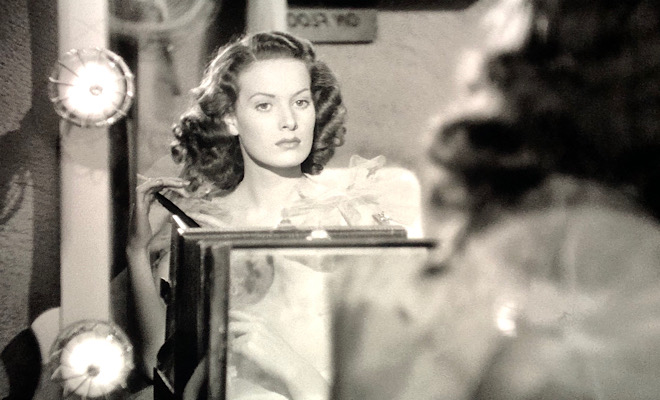 Dance, Girl, Dance arrives on Blu-ray packaged in a standard Criterion case. An eight-page fold-out booklet featuring an essay by film writer Sheila O'Malley, a cast and crew listing, and transfer notes (alas, no photos) is tucked inside the front cover. Video codec is 1080p/AVC MPEG-4 and audio is LPCM mono. Once the disc is inserted into the player, the static menu with music immediately pops up; no previews or promos precede it.

According to the liner notes, "this new digital transfer was created in 4K resolution...from the 35 mm nitrate original camera negative...Due to deterioration of the camera negative, some sections were scanned from a 35 mm fine-grain master positive preserved by the Museum of Modern Art." The 1080p/AVC MPEG-4 rendering often looks stunning, thanks to the retention of the film's natural grain structure, which maintains the feel of celluloid without overwhelming the image. A few errant specks and marks dot the largely pristine source material, but never enough to distract from the gorgeous cinematography by the esteemed Russell Metty. Superb clarity (it's quite easy to see the double dancing for O'Hara a la Flashdance in the long shots) and contrast bring fine details to life, with deep blacks, crisp whites, and wonderfully varied grays combining to create a lush, balanced picture. Lovely close-ups highlight O'Hara's fresh-faced beauty and Ball's brassy glamor, and only a few sporadic instances of softness creep into the presentation. While I always expect stellar transfers from Criterion, this one especially caught my eye, and I'm sure fans of this 80-year-old classic will be wowed by it as well.

There's just a touch of faint surface noise that occasionally crops up during quiet moments, but that's the only imperfection on this LPCM mono track, which was remastered from the 35 mm fine-grain's optical soundtrack. Musical sequences abound in Dance, Girl, Dance and solid fidelity and good depth of tone allow the orchestrations and vocals to fill the room. A wide dynamic scale keeps distortion at bay, sonic accents are crisp and distinct, and all the dialogue is clear, well prioritized, and easy to comprehend. Considering the film's vintage nature, this is a fine transfer that nicely balances all of the various and often competing aural elements.

Criterion skimps a bit on the supplements, offering just a couple of interviews, but the material is well produced and worthy of attention.

Dance, Girl, Dance may be a minor film, but it reminds us what a major trailblazer director Dorothy Arzner once was. With style and insight, Arzner elevates a run-of-the-mill tale by emphasizing its feminist aspects and coaxing spirited portrayals from up-and-comers Maureen O'Hara and Lucille Ball, who play rival dancers who also compete for the affections of the same man. Criterion supplies its usual excellent transfers, but supplements are surprisingly and frustratingly thin. Though hardly transformational, Dance, Girl, Dance remains an entertaining romantic-musical hybrid that flaunts a unique perspective for its day, features a host of colorful performances, and most importantly, showcases the talent and vision of an all too often overlooked woman director. Recommended.