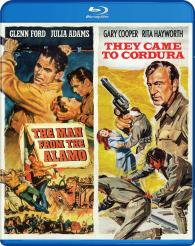 Two lavishly produced Mexican war epics, The Man From The Alamo and They Came To Cordura make their high-definition debut in this star-studded double feature spotlighting the talents of Glenn Ford, Gary Cooper, Rita Hayworth, Julia Adams and many more!

THE MAN FROM THE ALAMO (1953) stars Glenn Ford as John Stroud, a heroic survivor of the brutal battle at The Alamo who is branded a coward for fleeing to warn the local townsfolk of the approaching Mexican armies. He sets out to clear his name and avenge those who killed his wife and child.

THEY CAME TO CORDURA (1959) is a dramatic western set in 1916 Mexico with Gary Cooper as an Army officer accused of cowardice, sent to find five men worthy of a Medal of Honor. Rita Hayworth plays the shady lady accused of treason who he meets along the way.