Tigers Are Not Afraid (SteelBook)

Tigers Are Not Afraid a.k.a. Vuelven from Issa López casts a gothic ghost story fairy tale against the backdrop of the Mexican drug wars. A band of orphans tries to survive the streets as a vicious drug dealer tries to retrieve his stolen phone with the ghosts of his victims haunting the children's every move. A vivid mix of real-life horrors and fantasy - the film is unsettling as much as it is beautifully constructed. RLJ Entertainment and Shudder bring Tigers Are Not Afraid to Blu-ray in beautiful Steelbook packaging sporting an impressive, vivid transfer with a moody atmospheric audio mix and a welcome assortment of bonus features. Recommended.

Estrella's (Paola Lara) home city has been destroyed by the ongoing deadly Mexican drug wars. People disappear, murdered and only their abandoned children are left behind. After a school shooting, Estrella's teacher gives her three pieces of chalk and tells her they're magical wishes to protect her. When Estrella's mother disappears, she finds herself joining a gang of small boys led by El Shine (Juan Ramón López) who scrape and steal to survive. When they steal drug lord Chino's (Tenoch Huerta) phone, the children must go on the run as Chino and the ghosts of his victims follow. 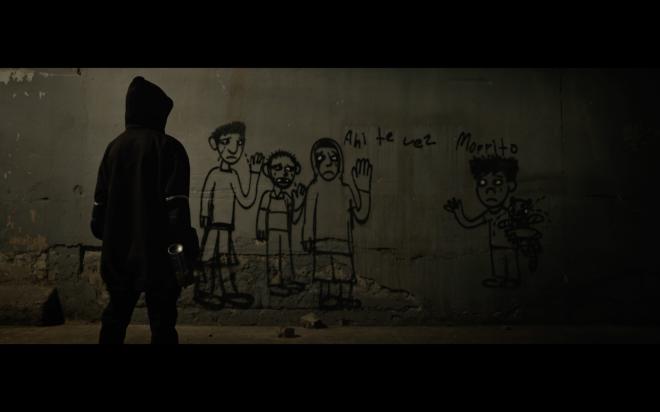 If there's one thing that a new and exciting horror movie can suffer from is a glut of hype. When you read quotes from Stephen King, Neil Gaiman singing a film's praise or read it compared to the early works of Guillermo del Toro, you take notice - but it also sets expectations a bit high. A film that earns that much attention rarely lives up to the hype, but I'm very pleased to see that Tigers Are Not Afraid absolutely lives up to those lofty statements. This is a hauntingly horrific movie that would be scary on its own without the supernatural elements. With the tragic ghosts of the deceased there's an added layer of poignancy and horror to the film. If you want a framing device of what to expect, it is very similar to del Toro's The Devil's Backbone but combined with the fluid shooting style akin to Alfonso Cuarón.

This isn't a happy film. It deals with a number of heavy topics none the least of which are the effects of human trafficking on families, but it's never a depressing film. Writer/Director Issa López manages this story with ease deftly weaving between the real-life horror elements and the gothic fantasy horror. If the film had just focused on the all too real human horror, I feel like it would overwhelm the show. It would simply be dour and maybe even easier to dismiss. But by adding a supernatural element, there's a balance an actually makes the journey of Estrella, Shine, and the other boys that much more poignant with a welcome element of hope. This show doesn't pull punches, but it doesn't leave you to wallow in the misery.

While there's plenty of real-life horrors, Tigers Are Not Afraid isn't one to shy from genuine horror. The ghosts of this show aren't exactly pleasant to look at. They lurk in the shadows, storm drains, and sewers creeping out to haunt Estrella and her friends - and they're damn creepy. Every appearance is a terrific setup of suspense and payoff. This may not be what some horror fans look for in the genre, the ghosts aren't front and center, they're more like accent pieces to a larger canvas. So if you're coming into this one expecting otherworldly ghouls stuck on Earth because of some vague curse - this isn't that kind of movie. Early on Tigers Are Not Afraid sets its rules for these spectral elements to exist and it doesn't deviate.

To call Tigers Are Not Afraid "unsettling" would be a bit of an understatement. Considering the real-life events at play this is not an easy watch. Combined with the human drama and the supernatural elements, there is a near-constant state of tension and suspense with just enough humane reprieve to provide that piece of hope I spoke of earlier. I'd heard of this film a couple of years ago and I'm happy to finally get to see it now that it's gotten a wide release on Blu-ray. Issa López is a talented filmmaker with a knack for the genre. Apparently she's teaming up with Guillermo del Toro to write and direct a "Werewolf Western" - whatever that is I'm intrigued! Hopefully, it gets a nice big theatrical release, I'd hate to have to wait forever and a day on a quality home video release before I got to see it.

Tigers Are Not Afraid arrives on Blu-ray thanks to RLJ Entertainment and Shudder in a two-disc Blu-ray + DVD release. Pressed on a Region A BD-50 disc, the discs are housed in a two-disc Steelbook package with separate bays so the discs aren't stacked on top of each other. The disc loads to trailers for other RLJ Entertainment releases before arriving at an animated main menu with traditional navigation options.

Tigers Are Not Afraid hits Blu-ray with an impressively detailed 2.39:1 1080p image. Shot digitally - I don't know what the final digital intermediate resolution was - but this is an often gritty and real-to-life looking image. Facial features, the rough slums various characters call home - and the creepy ghouls lurking in the shadows display clear appreciable details. Black levels are a big player here as much of the film takes place at night or in dimly lit alleyways. Blacks reach that deep inky quality with shadows offering enough light variance to give the image a welcome sense of depth and dimension. Colors are bold with vivid primaries and healthy flesh tones. All around a great looking transfer.

Tigers Are Not Afraid arrives with an excellent Spanish DTS-HD MA 5.1 with English subtitles and a less impressive English dubbed DTS-HD MA 2.0 track. Obviously - the native Spanish track is the ideal choice here. The dialog is clean and clear throughout without any issues. The soundscape is nicely mixed allowing for a terrific surround presence at all times that doesn't call attention to itself too dramatically. Key sound effects provide nice object placement - the slithery voices of the ghosts being an important sound effect. Scoring by Vince Pope does an excellent job of adding tension and mood to the film without overpowering the rest of the elements. Levels are spot on without any need of adjustment or monitoring.

The English dubbed DTS-HD MA 2.0 mix is rough to say the least. Losing the extra surround spacing is one thing, but the dubbed voices sound flat and lifeless. Unless you really hate subtitles, stick with the Spanish language mix.

Tigers Are Not Afraid comes packed with some respectable bonus features. Not only do we get a great commentary from writer/director Issa López but the extensive making-of doc is impressive. To top it off the interview between Guillermo del Toro and López covers a lot of ground in that hour. Well worth picking through.

Tigers Are Not Afraid isn't an easy film. For a horror film it doesn't take itself lightly, these aren't simple jump scares. The film has plenty of real-world horrors depicting the aftermath of the deadly drug wars in Mexico, but then the film slides in a gothic fairy tale. It's a hell of a film and at 83-minutes moves quickly and never becomes so oppressive to be depressing. RLJ Entertainment and Shudder deliver Tigers Are Not Afraid to Blu-ray in a beautiful two-disc Steelbook set sporting an excellent video transfer, a strong audio mix and a fine collection of bonus features. Not your average horror movie - but it's impressive and well worth the time. Recommended.