Kathryn Bigelow's intensely powerful The Hurt Locker remains an effective and highly-engaging war drama with splendid performances by Jeremy Renner and Anthony Mackie. Celebrating its 10th Anniversary, the Oscar-winning film is available as a 4K UHD Digital version in Dolby Vision HDR with a reference-quality Dolby Atmos soundtrack. The package is a magnificent and Highly Recommended upgrade.

Right from the start, director Kathryn Bigelow thrusts the audience into a foreign world, both figuratively and literally — a drastically alien and remote existence where the tension and anxiety are continuously high with a few sporadic intervals of respite, small brief moments to breathe a sigh of relief. In this post-invasion Iraq, the war persists for three members of a small EOD team (Jeremy Renner, Anthony Mackie and Brian Geraghty), stressed and pushed to the edge, charged with the disposing of explosive weapons while feeling the scrutinizing glares of the locals who may or may not be hostile. The story of Renner's SFC William James is an unfamiliar, and perhaps even rarely discussed, perspective on the psychological damage of war, one of developing an addiction to an adrenaline rush that can only be obtained on the battlefield. Standing in the middle of a cereal aisle at the grocery store is more agitating stress, given the numerous choices and possibilities, whereas disarming a dangerous bomb is a very narrow, single directive with one outcome and a satisfying rush. 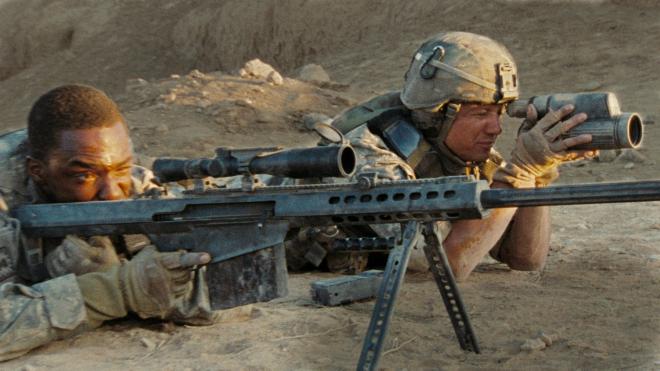 For a more in-depth take on the film, check out our review of the 2010 Blu-ray HERE.

Kathryn Bigelow's The Hurt Locker comes home as a 4K UHD Digital release that includes Dolby Vision/HDR10, Dolby Atmos, and 1 Bonus Feature. A copy can be purchased for $12.99 via iTunes, VUDU, Google Play and Fandango Now.

The war drama comes home in a surprisingly beautiful 4K transfer, offering a notable improvement over its Blu-ray counterpart. The movie was shot exclusively on high-quality Super 16mm film sprinkled with some 1080p HD footage here and there, and those elements were later mastered to a 2K digital intermediate.

The upscaled video shows a welcomed uptick in overall resolution, but it's not by much, which has a lot to do with the filmmakers' creative choices. Nevertheless, the finer details in the vehicles, buildings and clothing are slightly sharper, and the small imperfections in the streets are a bit more distinct. Awash in a thick layer of natural grain, the 1.85:1 image has a lovely film-like quality to it, as well.

Again, given the particular aesthetics approach to the story, the cinematography comes with a fairly limited range of colors, favoring a heavy earth-tone palette with lots of tans, browns and yellows, all of which enjoy an understated boost. Even so, reds and blues benefit from the jump to Dolby Vision HDR, looking fuller and more vibrant than its HD SDR counterpart. Meanwhile, facial complexions are more revealing with lifelike textures and a better rendering of skin tones that are accurate to the climate.

Contrast remains somewhat subdued and controlled, which is deliberate for creating the plot's somber, melancholic tone. Still, whites are brighter and more energetic while resplendent specular highlights provide a more realistic glow and shimmer along metallic surfaces, a more intense pop in the various lights and scenes with fire, and improved visibility within the hottest spots. Black levels, for the most part, appear relatively similar to its HD brethren, which again, has more to do with how it was originally photographed. Granted, there are times when the shadows are a tad richer and silkier, but it's not by a significant margin.

In the end, the 4K video presentation is a marked improvement, which fans will thoroughly love. (Dolby Vision Video Rating: 82/100)

The white-knuckle war epic erupts with a sensationally explosive, reference-quality Dolby Atmos soundtrack that awesomely amplifies the tension and suspense, making it a marked improvement over its DTS-HD MA 5.1 counterpart. The design immediately generates a believable and immersively hemispheric environment, as helicopters and jet planes are distinctly heard flying overhead, flawlessly panning across the room and directly above the listening. Various other atmospherics, like the chatter in busy streets or the echo of gunfire, also employ the surrounds with satisfying, enveloping effectiveness.

Meanwhile, imaging is continuously teeming and overflowing with lots of background activity, and sound effects convincingly move between the three channels and into the top heights, creating a highly-engaging half-dome soundstage. A dynamic, razor-sharp mid-range maintains extraordinary clarity and detailing during the loudest segments while Marco Beltrami and Buck Sanders' subtle score enjoys plenty of warmth. Vocals are crystal-clear and precise at all times, and a terrifically commanding low-end sends shockwaves through the room during action sequences with a palpable heft and a room-energizing presence. (Dolby Atmos Audio Rating: 98/100)

Only one bonus feature is ported over for this 4K UHD Digital version.

Ten years later, Kathryn Bigelow's The Hurt Locker remains an intensely powerful and grippingly suspenseful war drama subtly exploring the psychological trauma of combat as seen through the eyes of three soldiers tasked with the disposal of improvised explosive devices. The Oscar-winning film is made available as a 4K UHD Digital version, featuring a beautiful Dolby Vision HDR presentation and an awesome, reference-quality Dolby Atmos soundtrack, making this a magnificent and highly recommended upgrade for fans.

List Price $12.99
Go To Store
See what people are saying about this story or others
See Comments in Forum
Previous Next
Pre-Orders
Tomorrow's latest releases