Birds of Prey (And the Fantabulous Emancipation of One Harley Quinn)

Fresh off the breakup from Mr. J, Harley Quinn meets a few other psychotic women who form a team to take out a bad guy while walking the line of good and evil themselves in this high-energy addition to the DCU titled Birds of Prey. This release comes with a 1080p HD video presentation and Dolby Atmos audio track, both of which are good, along with some informative and good-natured bonus features. Recommended! 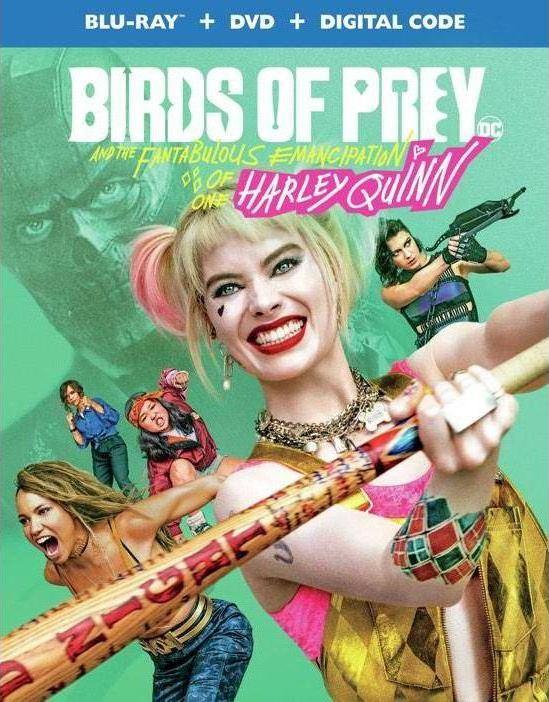 DC Comics and Warner Bros. have been putting their ears to the ground and listening to the calls for a less brooding and more energetic, fun-paced superhero universe for quite some time now. Audiences saw a good bit of that change in the wonderful Shazam! film and now DC Comics has turned that volume up to eleven with the ultra-violent, over-the-top anti-hero team-up Birds of Prey (And The Fantabulous Emancipation of One Harley Quinn). Even the title suggests that they’re trying too hard, which is the ultimate flaw with this otherwise fun if not exhausting movie.

The characters in Birds of Prey are some of the lesser-known characters in the DC Universe, besides Harley Quinn (Joker’s main squeeze). Fans that follow the comics or even animated DC shows would know about Black Canary and Huntress to name a couple, and this film gives them their limited time to shine, because this film is all about Harley (played to perfection by Margot Robbie), and leaves most of the other characters on the back-burner in hopes that a franchise will be born to explore more territory.

Written by Christina Hodson (Bumblebee) and directed by an almost first-time filmmaker Cathy Yan, Birds of Prey is a wild ride from start to finish with barely anytime to get a breath in. With the team-up of Hodson and Yan, along with Robbie, you can tell that this DC franchise is in very capable hands and that they’re striving for something completely different than what has been seen on the big screen since Man of Steel. The issue is that everything feels extremely forced and heavy-handed with humor and violence. Nothing felt organic with the movie. Instead, each element was just elevated to its highest peak that every sequence and character seemed to be injected with a large dose of steroids with no real message or plot, other than to give a glimpse into the brilliant yet chaotic psyche of Harley Quinn.

The film has a fun and unique way of telling its story with Harley narrating throughout, stopping the picture frame and giving a flashback, and even breaking the fourth wall with looking and speaking into the camera. This was a welcome addition to the DC world and it worked well. The scene is set just as Harley announces in a spectacular way that she and the Joker have called it quits, which has put most of Gotham out to kill her. One of the many people she has wronged is Roman Sionis or The Black Mask (Ewan McGregor in a fabulous flamboyant villain role), who puts out the John Wick-style bounty on her head to every assassin for hire.

From here, Harley crosses paths with various women, all with a distinct ability, including a young girl who has a penchant for stealing named Cassandra Cain, and a police detective straight out of an 80’s cop show (Rosie Perez). Along with Black Canary and The Huntress, these deadly women kill the bad guys, which all culminates to them teaming up against The Black Mask over some large rare diamond.

If there is a message or a point to convey at any time during the film, it’s so subtle and small that it might as well not be there. But, if constant F-Bombs, brutal violence, and seeing Margot Robbie live her best life as Harley Quinn is the expectation with Birds of Prey, then satisfaction will be at an all-time high. Birds of Prey is shot extremely well, keeps the pace fast, and goes in a different direction than any DC film before it. Sadly, it all felt unnatural and artificial.

Birds of Prey eats its way to Blu-ray + DVD+ Digital Copy from Warner Bros. The discs are housed in a hard, blue, plastic case with an insert for the digital code. The artwork of the main characters of the film is posted on the case as well as the cardboard sleeve. 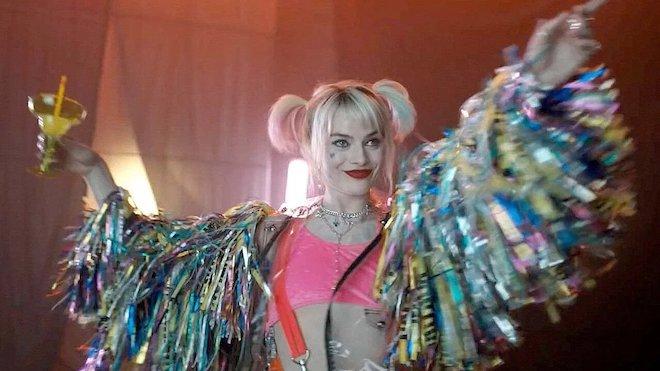 Birds of Prey offers up a tantalizing 1080p HD video presentation full of color and detail from start to finish. This is the brightest and most dynamic looking DCU film thus far and it looks great here on Blu-ray.

Even at the beginning of the film, the color palette is already different than most other DCU movies, providing some bright animation that transitions to a neon-light filled Gotham City that looks like a version of Las Vegas than a dark and brooding populated metropolis. The brightly lit neon signs, smoke, fireworks, and bold colors are rich and bubbly. This contrasts nicely with the lower lit scenes that are covered in grime and dirt from the more decaying locations. Primary colors in the wardrobe pop off-screen and explosions ignite that orange and red fire perfectly, with the added Joker-Esque colors of smoke and fireworks. Black levels are deep and inky and the skin tones are natural.

The detail is mostly vivid, however, there are certain sequences where smoke and glitter bombs go off that can look a little soft and pixelated here and there. It doesn't happen for long and tends to fix itself quickly, but it's evident. Other visual effects look excellent, such as the hyena and other large explosions. Closeups reveal facial features and costume textures nicely while wider shots showcase Gotham in a new bright light. Lastly, there were no major problems with banding or aliasing, however, some slight video noise crept up in lower lit sequences. 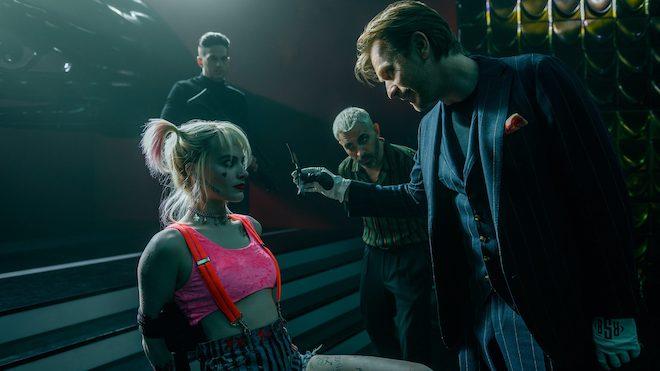 Birds of Prey offers a wonderful Dolby Atmos track that comes alive when it needs to. Like a lot of Disney releases, the overall volume is on the low end, thus needing to crank up the volume just a little bit to arrive at a normal listening satisfaction. After that is done, the soundscape is lively and entertaining. As Harley narrates the film, subtle sound effects or people talking, drink glasses clanking together, and other ambient sounds are fantastic in the surrounds and rear speakers. When the narrative forwards itself, the sound effects are robust and loud with each gun blast packing a powerful punch along with some excellent hits, kicks, and takedowns. All of these elements provide a wonderful low end of bass that never crosses into rocky territory, but rather utilizes that smooth, pulsating rumble.

Big explosions can rattle the room with ease and quieter moments have the necessary reverb and echo when characters are speaking softly in big spaces, providing a great sound atmosphere. The pop music and score always add to the chaotic nature of the film and the dialogue is clear and mostly easy to follow along with, meaning there are certain sequences during the heavier action moments where dialogue is drowned out by every other element. The height speakers provide falling raindrops, explosions overhead, and some fast bullets that fly by in a smooth transition from speaker to speaker with excellent directionality. Lastly, there were no issues with any pops, cracks, or hiss. 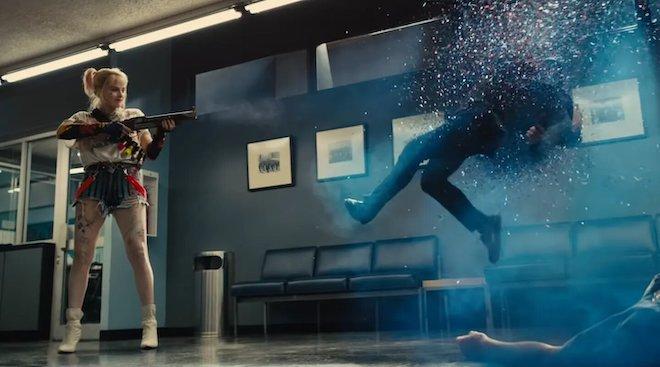 There are about 46 minutes of bonus material included, along with an alternate way to watch the film that cuts to behind the scenes information and interviews on how certain scenes were filmed and edited. 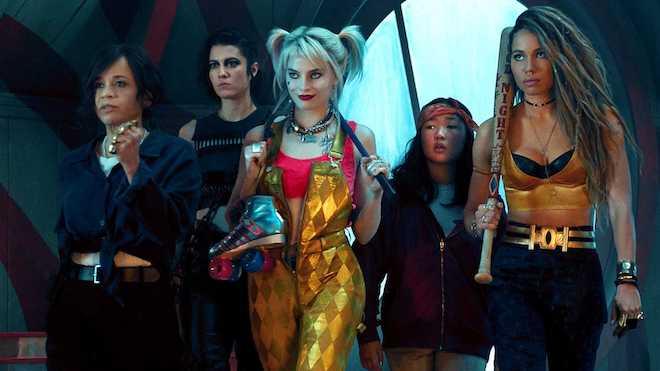 Birds of Prey is a fun and energetic step in the right direction, but the execution is too on the nose and it tries too hard to be clever, different, and fun which leads the entire production and stories astray. Still, there is enough to like about this world set inside the DCU, especially Harley Quinn, because there is more to her than meets the eye. The 1080p video is great with a wide color spectrum, while the Dolby Atmos sound very good. There are some great bonus features to add to the mix as well. Recommended!