Angel is a showcase for the glamor and allure that define Marlene Dietrich in her prime, but despite a strong cast that includes Herbert Marshall and Melvyn Douglas, top-notch production values, and the elegant touches of director Ernst Lubitsch, the film struggles to keep us engaged. The tale of a restless diplomat's wife who relieves her boredom with an impulsive tryst contains sprinkles of wit, but is largely an anemic romantic drama that takes itself far too seriously. Still, there's enough here to stoke the senses of classic movie fans in general and Dietrich aficionados in particular. A new 4K master perks up Kino's Blu-ray presentation and helps us appreciate all the beauty on display, which is really what Angel is all about. Recommended.

Destry Rides Again marked Marlene Dietrich's triumphant return to the screen after a group of theater owners famously labeled her Box Office Poison in 1938, but the movie that landed her on that notorious list and derailed her career for almost two years was Angel. Though it flopped when first released, director Ernst Lubitsch's light domestic drama about burgeoning feminism and marital ennui doesn't deserve its tarnished reputation. Yes, it drags in spots, is a bit too sedate overall, and doesn't rise to the level of Lubitsch's best-known films, but its style, sophistication, and refined performances compensate for those deficiencies.

As the film opens, a glamorous, well-to-do woman (Dietrich) arrives in Paris and drops in on her old friend Grand Duchess Anna Dmitrievna (Laura Hope Crews), a charming matron who runs a high-class "social club" (1930s euphemism for brothel) for continental travelers. The woman appears troubled and anxious, but before she can share her woes, she retires to an anteroom where she meets businessman Anthony Halton (Melvyn Douglas), who mistakes her for one of the girls in Anna's employ. The woman plays along and after some harmless flirting agrees to meet Anthony for dinner that night. She refuses to tell him her name, so he calls her his "angel," and after a romantic evening that may or may not have included sex, she disappears, leaving the lovelorn Anthony no choice but to try and find her.

The woman turns out to be Lady Maria Barker (Dietrich), wife of esteemed British diplomat Sir Frederich Barker (Herbert Marshall), with whom she shares a lavish home in London. Though Maria and Frederich are devoted to each other, their marriage has become mundane and unsatisfying...at least to Maria. Frederich perfunctorily performs his husbandly duties, but always puts his work first. He presumes Maria is perfectly content, and takes her affection for granted, yet little does he know his restless, unfulfilled wife has just relieved her boredom with an illicit tryst...until, of course, Anthony unexpectedly shows up and throws a wrench into Frederich's ordered, predictable life. 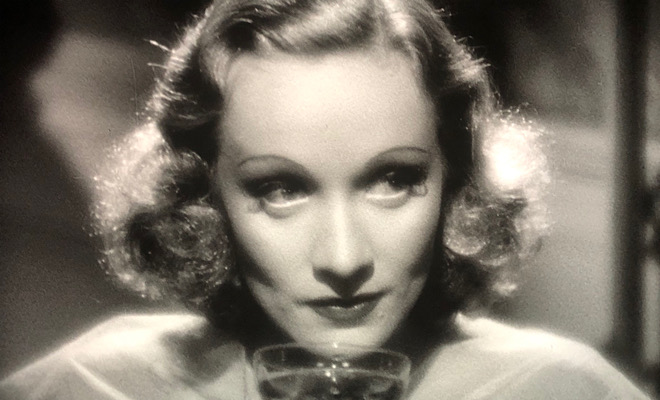 Lubitsch was a master of the ménage a trois. He previously explored triangular relationships to great acclaim in the risqué pre-Code films Trouble in Paradise and Design for Living, but censorship constraints forced him to tone down the salacious elements of Angel, which takes some of the fizz out of what should be a bubbly romantic cocktail. As usual, the director finds clever ways to outfox the censors and telegraph the story's adult themes and situations, but the patented "Lubitsch touch" seems more labored here, and as a result, Angel exudes far less joie de vivre than other Lubitsch movies.

The script by Samson Raphaelson, a favorite Lubitsch collaborator who also adapted Trouble in Paradise and would later write the screenplay for the captivating comedy The Shop Around the Corner, lacks zip, and tension comes at a premium. Though the idea of an established woman refusing to settle for marital boredom despite loving her husband might have seemed a tad scandalous in 1937, today the muted presentation dulls any lingering shock value and feminist implications. Consequently, the movie becomes a cautionary tale for complacent men who view their wives as ornaments instead of partners, rather than a portrait of a woman who refuses to rely on her husband for happiness and decides to grab the reins of her own life.

The trouble is Dietrich is not much more than an ornament in her own film, which makes it tough to buy Maria's dissatisfaction and rebellion. Stunningly glamorous, statuesque, and stitched into an array of beautiful Travis Blanton gowns, Dietrich seems more concerned with flattering camera angles and crafting a look than filing a dimensional portrayal. Image is everything to a star like Dietrich, and though she succeeds in making it impossible for us to take our eyes off of her, we don't really care about her character or which beguiled man she chooses in the last reel. 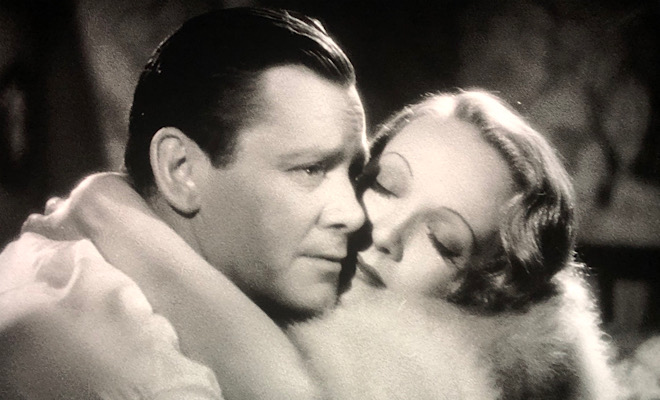 Marshall had worked with Dietrich five years earlier in Blonde Venus, and the two enjoy a comfortable chemistry that makes their on-screen marriage believable. It's Douglas, though, who really grabs attention. Still on the cusp of full-fledged stardom, he was already honing a debonair persona that would serve him well for decades, and Angel showcases it to perfection. Douglas would partner practically all of Hollywood's A-list female stars during his days as a leading man - Greta Garbo, Gloria Swanson, Claudette Colbert, Joan Crawford, Irene Dunne, Norma Shearer, Loretta Young, Merle Oberon, Rosalind Russell - but he never overshadowed them, and it's that willingness to relinquish the spotlight for the good of the film that made him a popular actor among his peers and an asset to star vehicles like Angel.

Angel should be better than it is. It's like a gourmet entree prepared with the finest ingredients that just requires a few dashes of salt to make it great. Angel may lack the seasoning - and spice - we crave, but it's still an appetizing dish worthy of a discriminating palette. 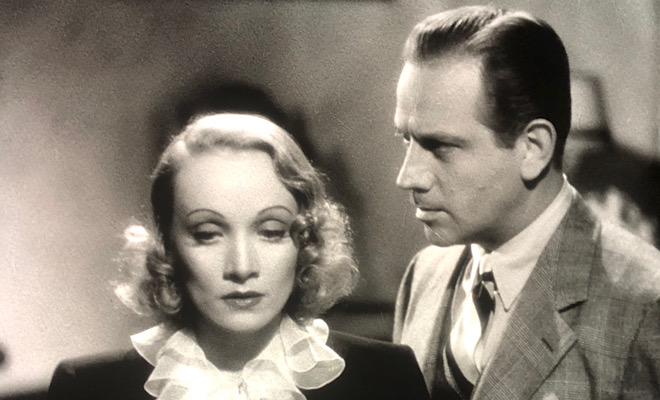 Angel arrives on Blu-ray packaged in a standard case with reversible cover art. One cover features Dietrich in a clinch with Herbert Marshall, while the other depicts her in the exact same pose with Melvyn Douglas. Video codec is 1080p/AVC MPEG-4 and audio is DTS-HD Master Audio 1.0. Once the disc is inserted into the player, the static menu with music immediately pops up; no previews or not promos precede it.

A brand new 4K master elevates this 1080p/AVC MPEG-4 transfer, which features terrific contrast and clarity, lush black levels, bright whites, and a nicely varied gray scale. Grain levels fluctuate and some scenes appear softer than others, but the overall presentation looks very film-like and faithfully honors the lush cinematography of Charles Lang, who won an Oscar for the 1932 version of A Farewell to Arms and was nominated a whopping 17 other times over the next four decades. Few actresses work a close-up better than Dietrich, and here Lang photographs her to breathtaking perfection. Print damage is evident, but the intermittent specks and faint scratches rarely distract. Without a doubt, Angel has never looked better, and Dietrich fans will be thrilled with Kino's treatment of this rare classic.

Angel is a very quiet film. Silences abound and long stretches of narrative transpire without any musical accompaniment. Nevertheless, the DTS-HD Master Audio mono track asserts itself well. Any age-related hiss, pops, and crackle have been erased, which really helps immerse us in the intimate drama. All the dialogue is clear and easy to comprehend, and when Frederick Hollander's music score does kick in, the wide dynamic scale embraces all of its highs and lows without any distortion. Though the track is unobtrusive, it serves its purpose well, and for an 83-year-old movie, that's worth noting.

In addition to a few trailers for other Marlene Dietrich films released by Kino, the only supplement is an audio commentary by Ernst Lubitsch biographer Joseph McBride. Though his delivery lacks much expression, McBride is very enthusiastic about his subject and provides a Lubitsch master class for classic movie fans. He calls Angel an "atypical" Lubitsch film that's both "enigmatic and suggestive," yet it's a perfect example of the director's trademark "oblique storytelling" style. McBride relates Angel to many other Lubitsch films, praises the director's writing abilities, talks about his keen ability to get risqué material past the censors, and analyzes the plot's central conflict. This commentary may not be riveting, but it's chock full of information and well worth your time.

Angel doesn't rank among the best films of either Marlene Dietrich or director Ernst Lubitsch, but this sophisticated, slightly saucy romantic drama about female emancipation and marital ennui offsets its narrative ennui by beautifully showcasing its glamorous star. Herbert Marshall and Melvyn Douglas vie for Dietrich's affections, but it's her relationship with the camera that distinguishes this elegant, understated movie. A brand new 4K master enhances the appeal of Kino's Blu-ray presentation, which also features solid audio and an insightful commentary track. Recommended.