Overview - A high school biology teacher looks to become a successful mixed-martial arts fighter in an effort to raise money to prevent extra-curricular activities from being axed at his cash-strapped school.
OVERALL
Worth a Look 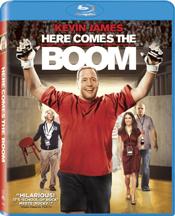 It's a plot device that has been used in every sitcom at least once. A problem arises where one of the characters needs a lot of money and fast – a new car, college tuition, or a big trip. The person is at a loss of where the money is going to come from. Then, bam! A poster declares that a contest looms. And, wouldn't you know it, the prize money is the exact amount that is needed to save the day. 'Here Comes the Boom' takes that age-old sitcom plot device and turns it into a movie.

After that first paragraph you may have your reservations about the movie. The funny thing is, it's not that bad. Yeah, I know it's crazy, right? Somehow the new Kevin James film about a pudgy biology teacher, who takes an improbably fast track to the UFC, isn't as bad as I first expected.

Scott Voss (James) is a lethargic high school teacher. Like Cameron Diaz in 'Bad Teacher', Scott walks into the room, sits at his desk, and waits for the period to end. He dislikes teaching anything to his students. This is an inspirational sports movie, so we know that at some point Scott will see the light and change his ways. It will most assuredly happen during a montage.

The big monetary crisis comes via an announcement from the school's tightwad principal. The school doesn't have the funds anymore, so it's cutting all extracurricular activities. Among those is the music program, and with it Mr. Streb's (Henry Winkler) job as the school's dedicated music teacher. Scott feels obligated to help. He stands up for the music program and promises to raise the needed $48,000 to keep the program funded.

If this was a sitcom, Scott would've magically run into a poster indicating that a talent show was just around the corner with a prize that would be just enough to cover the total. Since the movie needs to fill up its feature-length, Scott comes up with a more elaborate plan. The talent show poster in this instance comes in the form of a Danish ex-MMA fighter named Niko (Bas Rutten). The two form a friendship in an American citizenship class that Scott teaches at night. Scott finds out that UFC fighters can get up to 10-grand even if they lose. The gimmick is set. MMA it is.

'Here Comes the Boom' features all the predictable tropes associated with underdog sports movies. Scott starts out as a scrub. He stumbles around the ring while beefy men beat him to a pulp. Then, with the help Niko and a few training montages, Scott quickly learns the ropes of fighting in the Octagon. He's even got a woman to impress (Selma Hayek) as he learns self-empowerment and the importance of sacrifice.

So, how is this movie any good despite its cloying, seen-it-once-seen-it-a-thousand-times structure? Two reasons: Henry Winkler and Bas Rutten. Winkler is always funny no matter what he's doing. It turns out that playing a scatter-brained high school music teacher is right up his alley. Rutten, an MMA fighter himself, provides genuine laughs amongst the thorny ground of Kevin James' Vince Vaughn-like ranting.

Sure the movie is corny and depends on its saccharine sentimentality – the swelling trumpet and piano music during the heartfelt moments is a little too on the nose. However, through all the beatings Kevin James takes in this movie; through all the punches to the face, body and kidneys, I still found time to smile. I wasn't expecting that at all.

This is a single-disc release on a 50GB Blu-ray Disc. There's also the option of downloading an UltraViolet Digital Copy. The disc is packaged in a standard keepcase.

Sony has a knack for producing knock-out high-def presentations. 'Here Comes the Boom' comes close, but the 1080p presentation seems to have some minor hang-ups that keep it from achieving the demo-quality that Sony so often puts out.

Clarity and definition are top-notch. Close-ups reveal all kinds of minutiae. Pores, beads of sweat, body tattoos, and chiseled MMA muscles are on full display. Streaming blood looks as lifelike as it could. The film is full of color. Primaries are boldly presented. Blacks are, for the most part, pitch. The one problem I had with the presentation is that contrast felt a bit uneven at times. There's a scene in Scott's home where Bella (Salma Hayek) pops his shoulder back into place. The darkness of the scenes doesn't seem to mesh with the other darkly lit scenes. Then there are a few moments in the school where outside light feels like it's burning just a tad too hot and ends up washing out faces and textures.

That isn't to say that the movie doesn't look good. It just isn't demo-quality. The rest of the presentation is immaculate. There isn't any sign of technical errors or compression artifacts. Banding, aliasing, and blocking go unseen. Besides the wavering contrast issue, 'Here Comes the Boom' looks fantastic on Blu-ray.

The lossless DTS-HD Master Audio 5.1 track is, on the other hand, quite close to reference material. This is an engaging audio mix that reaches its full potential during the fighting melees that Scott participates in.

The rear channels ring with audience applause. Hooting, hollering, shouting, and screaming are all piped through the rear speakers making you feel like you were sitting ringside for each bout. LFE is tough. The bass drives home punches, and emphasizes the introductory songs of the fighters.

Dialogue is punchy. Direction effects are active. The sound scape is constantly swirling as Scott bobs and weaves his way through his fights. Some punches land and others whoosh through the air. Those sounds are seamlessly transferred through the front and center channels. This is a great sounding audio mix from start to finish.

It's sort of amazing that all the clichés in this movie don't pummel it to the ground. Somehow, by the end, it's still standing. Mostly with the help of a couple of delightful supporting actors. Sony has provided another solid presentation all the way around. I'm not so sure I'd go as far as putting out a recommendation for 'Here Comes the Boom', but I'd definitely say that it's worth a look if you're even the least bit curious.

Sale Price 9.99
List Price 14.99
Buy Now
3rd Party 5.72
In Stock.
See what people are saying about this story or others
See Comments in Forum
Previous Next
Pre-Orders
Tomorrow's latest releases