The Good Place: The Complete Series

Are you a good person - or a bad person… and if you were a bad person could you still become a good person? That's the existential quagmire that show-creator Michael Schur and executive producer Drew Goddard aim to explore with The Good Place. Starring Kristen Bell, William Jackson Harper, Ted Danson, Jameela Jamil, Manny Jacinto, and D'Archy Carden - the show flows with infectiously creative energy and humor the show held strong through fifty episodes to a satisfying conclusion. Shout Factory delivers The Good Place: The Complete Series to Blu-ray in a 9-disc set featuring terrific video transfers, great audio mixes, and some nice bonus features to pick through. If you loved the show - you'll love this set. Highly Recommended.

Eleanor Shellstrop (Kristen Bell) is dead - but that's okay because she's in the Good Place. As a sort of spiritual guide, Michael (Ted Danson) explains - Eleanor is a good person and earned enough points in life to be placed among the best of her peers, the ethical philosophy teacher Chidi (William Jackson Harper), the philanthropist Tahani (Jameela Jamil), and the silent and thoughtful monk Jason (Manny Jacinto). The only problem is Eleanor is actually not a good person. Through some sort of mixup, The Good Place is getting the wrong Eleanor Shellstrop. Determined to prove she does deserve to be in the Bad Place, Eleanor recruits her fellow residents to help her understand what it takes to be a good person. 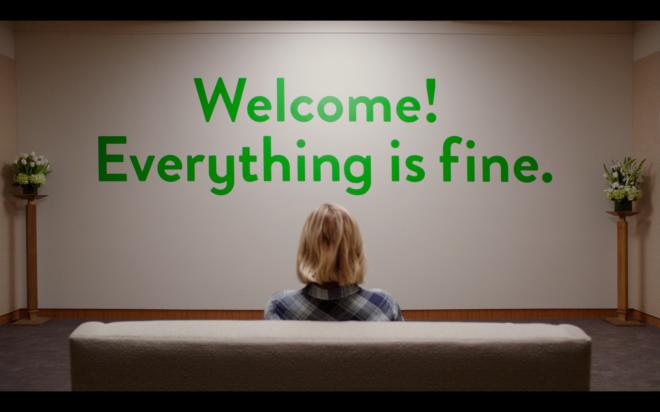 I so wish that brief synapsis I wrote above was enough, but there's a whole hell of a lot of plot twists and character turns throughout the four seasons of this great show that I can't spill the beans. It'd ruin the fun. It's kinda like when you hear a friend tell a great joke with pitch-perfect cadence and timing, maybe evening giving the characters little voices, and you just bust a gut. But then you try to tell the same joke to someone else without those essential elements and it's just not funny. That's what trying to explain why The Good Place is so forking funny is like. You really can't get into any detail about the show beyond the first episode or two or you risk spoiling some terrific comedy writing as well as some impressively thoughtful - yet accessible - philosophical pondering. I took my share of classes in college but I wouldn't dare come close to calling myself an expert, or hell, even a learned enthusiast of philosophy. But this show never felt dumbed down, nor did it fly over my head. Core concepts are broken down and made easy to understand with the help of some damned impressive comedy writing.

While I will sing the praises of The Good Place to all those willing to listen, it's not perfect. After two terrific seasons, Season Three got off to a bumpy start. There was just something off about the pacing - and after watching through it again, it feels a little off. Thankfully this show went in with the goal of a specific episode count and didn't aim to linger too long. Thankfully after a few episodes, Season Three finds its footing, and the drive for the characters to still be on their journey. As Season Three smooths out, it leans into Season Four with a nice drive towards the finish line.

Even when The Good Place seems like it's just wandering around, it never really feels like it doesn't know where it was going. You didn't know where it was going - and that's what made it fun. And by the time you reach the end, you're thoroughly satisfied and maybe even a little heartbroken that it's all over. You want more, naturally, but that would have just spoiled things. The concept could only run for so long and this show takes its final bow at the right moment.

Like many out there, I didn't get to enjoy The Good Place as it was broadcast on NBC. I didn't have cable so I was left waiting for episodes to trickle out onto Hulu or get picked up on Netflix after several months. I hated to wait but it was always worth it. You can easily binge-watch The Good Place but I feel it's a show better suited for slow enjoyment. While most of the show is comedically driven, it does manage to ask some genuinely earnest life questions. You don't need to spend your days ruminating on them, but give it a little consideration between episodes. Plus, the longer you take to watch it, the more enjoyment you get out of it!

Shout Factory delivers The Good Place to Blu-ray in a 9-disc Blu-ray set, 8 discs for the entire four-season run with the 9th disc for extra bonus features. Pressed on Region A BD-50 discs, the discs are housed in a 9-disc hard Blu-ray case with identical slipcover artwork. Inside case artwork can be read through the blue plastic giving you an episode list and some bonus feature info. Each disc loads to an animated main menu with traditional navigation options.

The Good Place offers fans an overall pleasing 1.78:1 1080p transfer that offers terrific details, bright bold colors, and appreciable image depth. As this new world is intended to look better than the one we live - it comes packed with some impressive details. The artificial neighborhood Michael crafted has that lovely manufactured plastic-like quality to it. It looks like any town you might walk into but at the same time, there's something very fake about it. Right down to blades of grass or the titles of books sitting on shelves, details are always appreciable for extra comedic value.

CGI effects are touch and go depending on the usage. This show is pretty absurd at times so the visual effects often reflect that. Where the effects are most impressive are when they're completing an intricately designed visualization of the afterlife - The Bridge Forward prominently featured in Season Three is a great example of what is clearly a very small practical set with green screen surroundings extended into the infinite. As follows, image depth can fluctuate a bit. When shot in a practical real-world set, it looks great with nice three-dimensional qualities. When the cast is in front of a green screen you can feel where those boxed-in walls stop. All in all, for a network primetime comedy, this is a pretty damn good looking show and turns up nicely on Blu-ray easily besting the quality of the streaming presentations on various providers.

Each episode of The Good Place comes with a nicely defined DTS-HD MA 5.1 audio mix. Right off the bat, this show ticks off the boxes nicely with clearly defined dialog - which is important for 99% of the jokes, clean music cues, and an appreciable surround presence thanks to atmospheric effects. A lot of the sound design isn't intended to call attention to itself unless it's a critical event to the story. Moments inside The Good Place neighborhood offer appreciable crowd sounds but nothing overly dynamic. The specific sound effect I enjoy is when someone calls on Janet and she arrives with a metallic DING - but that sound effect is never in the same place and is relative to where actress D'Arcy Carden appears. 50 episodes and each sounds great with steady levels so you shouldn't need to adjust the volume throughout a binge session.

The Good Place sports a halfway decent assortment of bonus features. The episode audio commentaries with various cast and crew are decent enough listens, but the - the Chapter 1 & 2 and Chapter 12 & 13 are the best because those are 2-parter episodes so there's more room to discuss the production, where the story is at in the series. It's a bummer there aren't more commentaries, especially for the final season.

The Bonus disc is a collection of pretty standard material, but the short VFX showcases are really wild providing before and after CGI comparisons to create some of the worlds and bizarre imagery in the show. The Table read is pretty cool - especially because you can already see how Ted Danson is working out his character's cadence and movements just sitting in a chair. All in all not bad, a few more behind the scenes stuff would have been cool but this is decent.

Season One, Disc One:

The Good Place is just a damn good show. It manages to explore a lot of life's kookie intricacies philosophically without leaving the audience behind. The jokes fly fast and the show's good nature makes you want to keep coming back for more. The third season is a little bumpy at the start, but those few episodes are an anomaly among the fifty episodes that comprise this entertaining romp with hilarious pitch-perfect comedic timing. After four seasons, you're left wanting more - which is the right place to end things before it got stale or overstayed its welcome.

Shout Factory delivers The Good Place: The Complete Series to Blu-ray in terrific form in a robust 9-disc set. Every episode enjoys a colorful and detailed image transfer with a solid audio mix to match. Bonus features may not be the most robust package out there, but there are some decent extras worth checking out. If you loved The Good Place - you're saved with this set. Highly Recommended.