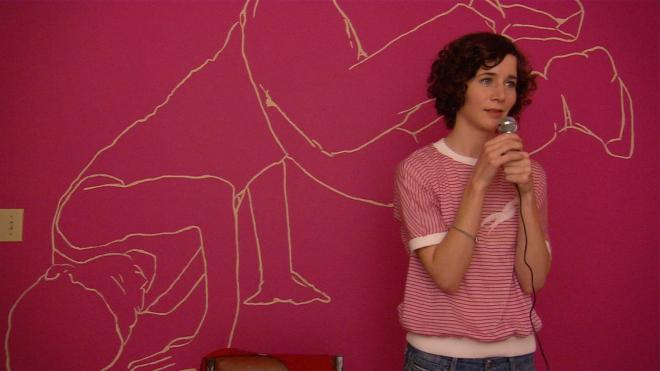 Me and You and Everyone We Know

Quirky indie darling Me and You and Everyone We Know makes the leap to Blu-ray thanks to The Criterion Collection. Miranda’s July’s arthouse comedy-drama focuses on the awkward struggles of making honest human connections in a disconnected world. Using vignettes that weave together the lives of her socially displaced characters, July’s film is an acquired taste like most early 00’s indie movies. With a solid A/V presentation and tons of fantastic bonus features, this release is Recommended (back and forth, forever.)

I remember a time not too long ago when video stores stocked those thick double-disc Criterion DVD sets. The early 2000s erupted with indie films and the shelves were filled with an outpouring of Criterion’s home video offerings that introduced us to names like Wes Anderson and Miranda July. I can vividly recall seeing July’s debut film on the shelves thanks to the bright pink artwork that stood out like a sore thumb. What a time to be alive! It should come as no surprise that her melancholy debut film Me and You and Everyone We Know finds a home on Blu-ray with Criterion. Back in 2005, the film presented a lonely and disconnected world where even our digital connections weren’t enough to satisfy our need for human interaction. Sound familiar? July imbues the film with kindness, hope, and optimism that is a welcome feeling to those of us stuck in our own little worlds today.

Memorable for its unusual title, July's film features an outstanding cast led by herself and John Hawkes as two lost souls struggling to find connection. July plays the socially awkward yet bubbly Christine. Her bedroom doubles as a studio for her digital video art that she hopes to get featured at the local gallery while she works her day job as a driver for ElderCab.  Hawkes is a newly divorced father named Richard who opens the film attempting to impress his sons by lighting his hand on fire. He writhes in pain out in the yard while his ex-wife packs up his belongings. Richard’s sons Peter (Miles Thompson) and Robby (Brandon Ratcliff) are children of the internet age. They avoid their dad while spending time printing out ASCII text art or chatting anonymously online. Their discoveries through the internet are no different than their schoolmates Sylvie, Heather, and Rebecca testing the waters of emotional and sexual connections in the real world.

Christine and Richard meet at the local department store where Richard works selling shoes.  When she describes how uncomfortable her flats can be Richard replies with a tender “You think you deserve that pain, but you don’t.” It’s here that July signals the emotional heft of the film while also framing it in an unexpected moment. Like her character Christine, July expresses the raw power of human connection with a relaxed innocence revealing the true humanity within. Whether it's teenage sexual development or the wholly innocent six-year-old chatting with a stranger online, Me and You and Everyone We Know is so effective at highlighting the lengths that people go in search of meaningful connection. In the most telling scene, Richard and Christine are pushed together literally when her makeup compact needs gluing. He tries to pull away but she says “Let’s give it another 15 seconds” and the film gives them that exact time awkwardly but purposefully.

Harboring a sort of Richard Linklater-esque touch this low-fi spiritual journey falters a bit with performances feeling wooden from the adults, but redeems itself with the child actors. Miles Thompson and Brandon Ratcliff are outstanding as Peter and Robby. Their connection to the material displays a cool confidence without overselling their roles. Using untrained actors allowed July to achieve something special here with two roles that could easily have been the focus of the narrative.

Thematically the film reaches into some interesting places that in 2020 can feel relevant. Digital culture and the divide of human connection went hand in hand at the start of the millennium. July saw the divide clearly as a private vs. public shift. While social media was a few years off we can clearly see this shift through Peter’s fascination with chat rooms and Christine’s VHS submission to the gallery. In July’s world, we are bearing witness to average people choosing to safeguard their desires and tucked away not unlike Sylvie’s hope chest dowry. What makes Me and You and Everyone We Know work so well is when these safeguards are broken they’re met with genuine kindness.

Me and You and Everyone We Know arrives on Blu-ray thanks to The Criterion Collection. The BD-50 Region A disc comes housed in a typical Criterion-style transparent case with new artwork for this release. Inside the case is a large insert booklet with essays by artist Sara Magenheimer and novelist Lauren Groff. The disc loads directly to the Main Menu screen with typical navigation options.

Criterion’s HD release of Me and You and Everyone We Know boasts a great-looking 1080p image framed in 1.78:1. Primaries are strong with confident depth and clarity. Fine detail is apparent in costuming and faces through most of the feature. Camera limitations from the time can inhibit clarity though I am impressed at how much color and detail is squeezed out. Highlights are a bit blown out and there is some noise in low light scenes and shadow but not enough to detract from the presentation. It’s an excellent image transfer for the arthouse film and well worth an upgrade from previous home video releases.

Me and You and Everyone We Know arrives on Blu-ray with a standard lossless DTS-HD MA 5.1 audio track. Dialogue is clearly recorded and presented gently through the center and front channels. Electronic scoring from composer Michael Andrews (Donnie Darko) has a bubbly chilled out MIDI feel which adds another layer to the awkward attempts at human connection. It’s a great sounding DTS track that compliments the melancholy film very well.

Fans of the film will be excited to see the special features for this release. Pulling together a near career retrospective for Miranda July, Criterion has turned this disc into something truly special for those looking to go into the mind of the artist. Start with Where it Began and drop into the rabbit hole from there.

Me and You and Everyone We Know made quite an impact in 2005 during the indie explosion thanks to the quirky tone and emotional heft. Not to mention the "back and forth, forever" scene that launched a million tattoos. Though it may be an acquired taste I found it a time capsule of early HD filmmaking when artists like July were taking risks and expressing the poetry of their experiences in an honest and instant fashion.

The Criterion Collection’s Blu-ray offers a solid A/V presentation that preserves the film’s blocky 00’s digital look which adds an element of nostalgia and wistful innocence to it. Bonus features on the disc should be considered a catalogue of Miranda July’s work rather than just supplements to the film. Recommended.