The Criterion Collection inches closer to completing Wes Anderson's entire catalog with a beautiful Blu-ray update of The Grand Budapest Hotel. The film is a visual comedic marvel intricately designed and populated with some of the most colorful comedic characters committed to screen. This disc features a slightly upgraded transfer, the same great audio mix, and a bounty of amazing bonus features. From the gorgeous box art to the inserts to the film itself - the Criterion Collection's release of The Grand Budapest Hotel is Highly Recommended.

"What happened, my dear Zero, is I beat the living shit out of a sniveling little runt called Pinky Bandinski, who had the gall to question my virility. Because, if there's one thing we've learned from penny dreadfuls, it's that when you find yourself in a place like this, you must never be a candy ass; you've got to prove yourself from day one. You've got to win their respect. You should take a long look at HIS ugly mug this morning… He's actually become a dear friend."

As we've already done a pretty fantastic review for the original Blu-ray release, I see no reason to go back through the story particulars again here. Read that Review. 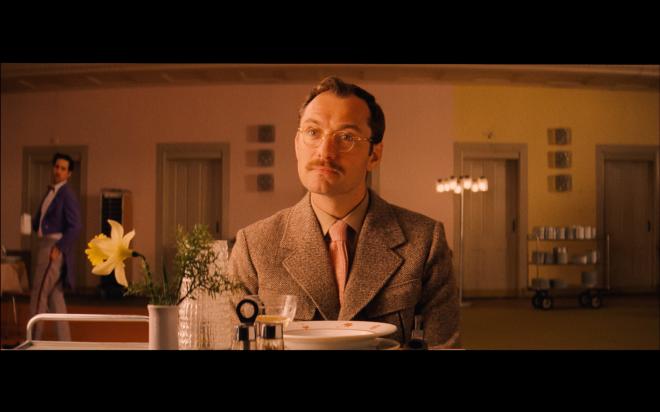 There's no way around admitting that I love The Grand Budapest Hotel. While I love most of Wes Anderson's films dearly and revisit them at least once a year - this one stands ahead of the pack in my book. For the 2015 Academy Awards, I was hoping Grand Budapest would be the dark horse winner - it's winning for Original Score, Costume Design, Production Design, and Makeup and Hairstyling are well deserved. While I thought Birdman was a great movie at the time - it hasn't been something I appreciated outside of Michael Keaton's great performance. But then he's great in everything he's in. The Grand Budapest Hotel was the lighthearted wonder in a pack of heavy - often dour stories. That said, I was also cheering for Boyhood to win big.

Wes Anderson films as a whole maintain this sense of lighthearted whimsey with comedic tragedy. Set against the backdrop of the fall of grand Eastern European resorts and decadent decorum, I feel the comedic tragedy for The Grand Budapest Hotel is time. It always moves forward and as much as we'd like to - we can't physically go back there. The only way to experience the past is through the stories told by those who were there.

It's this exaggerated and exciting story by our aged Mr. Moustafa (F. Murray Abraham) to the young writer (Jude Law) that we get to be a part of M. Gustave's (Ralph Fiennes) and Zero's (Tony Revolori) adventures. They're often hilarious, but the tragedy is they're trapped in that time, like the old hotel itself. The only way we can experience what happened is through the writings of a man who was told this story by a man who was there in such vivid detail you wish you'd been there to experience it for yourself.

Now that The French Dispatch has sadly been delayed until October - fans will just have to pass the time digging through this film again. I saw The Grand Budapest Hotel in the theater at least five times between The Mayan Theatre and The Esquire Theatre in Denver. On a cold spring weekend that could pour rain or pound the city with snow, my wife and I were frequently drawn back to this charming little film. It's a favorite. It's one of the movies I'd take with me if I was stuck on a deserted island because it never fails to make me laugh.

The Grand Budapest Hotel enters The Criterion Collection in a single-disc Blu-ray release pressed on a Region-A locked BD-50 disc. Housed in a cardboard digipack case - the case itself is an elaborate piece of artwork with the outside showcasing the shabby 60s blue with the inside the robust pink of the Grand Budapest Hotel. In addition to the disc, there is a foldout featuring reprints of all the official documents and newspaper clippings featured throughout the film. Then there is a double-sided poster recreating the case artwork of the bathhouse. After that - there is a booklet featuring character design drawings, an essay by Richard Brody with the Mart Twain short story 'The Portier'

Shot on 35mm in 1.37:1, 1.85:1, and 2.40:1, the film was finished on a 2K digital intermediate. Now the transfer details for this release are a tad hazy indicated in Criterion's booklet "Supervised by director Wes Anderson, this digital transfer was created in 2K resolution from the 35mm original camera negative." It's unclear if this is the exact same transfer as the one used for the original Fox release or not - however - this isn't exactly the same master. The 2015 20th Century Fox release had a peak average bitrate of 24mbps where this release from Criterion regularly peaks at 37-39mbps. While there isn't an appreciable difference in overall details - at least not that I could easily point to and showcase in screengrabs, there is a notable improvement in image depth.

Where the original transfer had an appreciable pop to it, this disc really pops. The first time we see the model work to set the stage of the Grand Budapest and its scenic alpine location, I felt like the amount of depth to the image was notable. The amount of added clarity may be difficult to perceive, but I felt like I was seeing finer details in makeup or characters in the background standing as visual gags better than I'd ever seen it. My wife and I both were spotting small visual jokes we'd never seen in the dozens of other viewings of the movie.

Similar to the previous release, The Grand Budapest Hotel shifts aspect ratio depending on time period. I wouldn't call this as jarring as an IMAX presentation for some films, as there is more motivation and purpose behind the shift. To that end, details are crystal clear allowing you to fully appreciate the intricate work that went into creating this world. Film grain is fine giving the image a nice film-like appearance throughout. Colors are gorgeous as they tend to be with any Wes Anderson movie allowing for the full range of primaries and every shade in between to pop on screen. Likewise, Black levels are inky and deep with crisp clean whites. I wouldn't call this a "night and day" improvement - but shifting between the two discs, this Criterion release does offer up some nice micro-refinements to the overall image quality.

Likewise, I'm not sure if there's been any remixing done for this English DTS-HD MA 5.1 audio track or if Criterion simply reused the already available - and still very excellent - mix previously released. After essentially watching this film twice in a day between the two releases, I didn't hear anything noteworthy to suggest this is a different mix.

The dialog is crystal clear. Sound effects are well-positioned giving a nice surround presence even in the quiet dining hall of the old hotel. The big ridiculous gunfight at the end is a wonderful piece of surround mixing! And then we have the Desplat score to punctuate the show! I love this score and how it punches in the comedic beats is a delight. New mix or old, it's a great track.

It wouldn't be a Criterion Collection release without at least a few quality bonus features! While there are some great new behind the scenes materials, the big winner of this set is the Audio Commentary featuring Wes Anderson, Roman Coppola, Jeff Goldblum, and critic Kent Jones. It's a sprawling commentary to be sure, but they all offer up an amazing amount of detail about the production and other classic films that influenced various sections of the film. On top of the new stuff, Criterion has also brought over all of the previous release bonus features.

For The Grand Budapest Hotel, the Criterion Collection continues their appreciation of Wes Anderson with yet another terrific Blu-ray re-release that easily sets aside the disc from 2015. While the new encoding of the transfer may not be enough to entice a repurchase for some - for those who waited for this inevitable release, you are duly with a first-rate A/V presentation along with a host of excellent bonus features to keep you occupied. If you're a Wes Anderson fan that also happens to be a Criterion fan - Your collection isn't complete without this release. Highly Recommended.