The Curse of the Werewolf

The Curse of the Werewolf is an atmospheric and brutally savage Hammer horror film that deftly navigates the lycanthropic mythology with an emphasis on character and mood. Starring Oliver Reed, Richard Wordsworth, and the alluring Yvonne Romain the film follows the violent struggle of a young man born from a tragic experience. Censored for decades due to explicit violence it arrives here on Blu-ray completely uncut in all its bloody glory thanks to Scream Factory. With an excellent A/V presentation and loads of bonus features this release comes Highly Recommended. 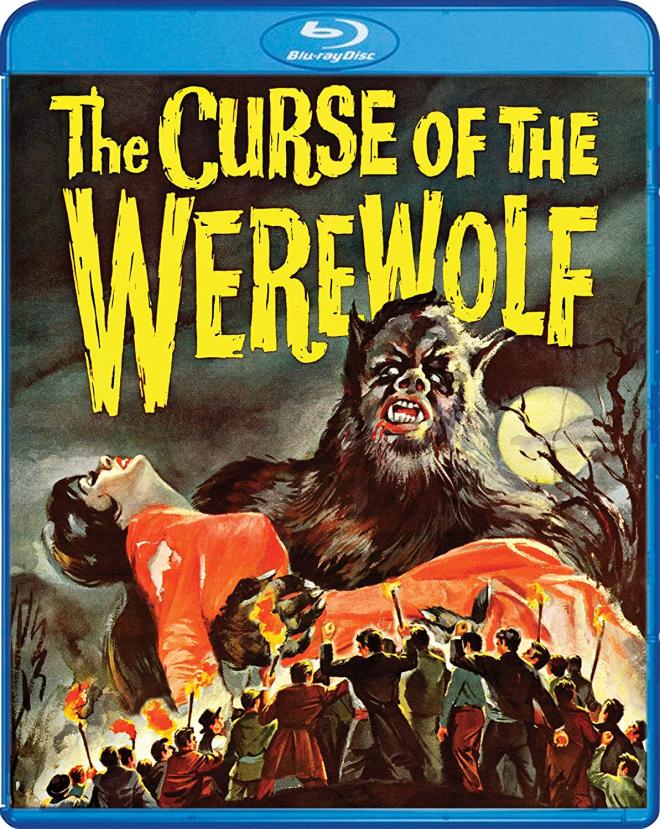 The Curse of the Werewolf shouldn’t be a good horror film. It doesn’t do anything that a proper creature feature is supposed to do and barely qualifies as a werewolf movie at all. The star of the film doesn’t even appear until halfway through! Don’t even get me started on when you get to see some bloodthirsty rampage action either. And yet this extraordinary tale of tragedy, love, and sacrifice is realized so well you’d wish every werewolf movie cared this much about the cruel tenacity of inherited trauma. If you could add in some Sybil Danning you might have the perfect werewolf movie. Maybe.

In 18th century Spain a beggar (Richard Wordsworth) passes through a village and calls at the castle of the noble Marques Siniestro. He is treated like an animal having to literally dance for his supper as the cruel nobleman taunts him. Tossed in the castle dungeon and forgotten for years the beggar only comes to know the jailer and his mute daughter. Now the cruel nobleman is a vile old man groping at the grown-up servant girl (Yvonne Romain) who refuses his advances and thus gets tossed in with the beggar. She eventually escapes and kills the nobleman only after getting raped by the beggar. Hiding out with a gentleman named Don Alfredo (Clifford Evans) and his housemaid Teresa (Hira Talfrey), the girl discovers she is pregnant with the beggar's child. She dies in childbirth and delivers a cursed offspring on Christmas Day. The child, Leon, is happily raised by Alfredo and Teresa. Years later Leon reveals to his adoptive father that he began having bad dreams after tasting blood during a hunting trip with Pepe the village watchmen. Alfredo turns Leon’s hand over to see tufts of hair growing on his arm.

The Curse of the Werewolf is a stylish, character-driven Gothic tragedy that never gets the attention it deserves. Cobbled together from an unused production and liberally based on the novel The Werewolf of Paris the film veers away from quickly establishing our protagonist as a violent monster. Instead, we’re given the legacy of trauma within the young boy as it manifests itself through his development. This is in effect Leon’s origin story by examining the murderous impulses wrought from his cursed birth that resonate through his relationships and mold his grip on existence. In essence, the true monster isn’t Leon but rather the Marques Siniestro who created him!

In an interesting twist on the lycan narrative, a priest informs Alfredo that the conflicting elements of Leon are an inherited weakness battling for control over his body. He tells Don Alfredo, “If the soul of the man is strong and clean, we'll generally exorcise the spirit of the beast before it is many years old, but if for some reason the soul is weak, an inherited weakness, an accident of birth then...a werewolf.” The priest then advises replacing the love missing from Leon’s life in order to counteract the weakness that drives his inner beast during the full moon. When Leon grows he’ll find the only relief will be the love of a woman.

Nearly 45 minutes into The Curse of the Werewolf we’re given our first look at the grown Leon played by Oliver Reed. His performance is moody and troubled injecting the film with loads of tension as he deals with containing the beast. Sweaty and on the edge of a nervous breakdown in nearly every frame, Reed keeps you in a state of utterly delightful suspense. Veteran Hammer Director Terence Fisher wisely uses Reed’s commanding performance to buoy a slightly meandering script. If The Curse of the Werewolf has any real faults it's the awkward final chase after Leon transforms into the beast. Thankfully by the end, the impressive makeup effects will bolster your confidence in this excellent gothic horror film.

The Curse of the Werewolf howls onto a Collector’s Edition Blu-ray thanks to Scream Factory.  The Region A BD-50 disc is housed in a standard keepcase with reversible artwork. Once inserted in your player the Shout! and Scream logos are presented before landing on the static Main Menu screen with typical navigation options. 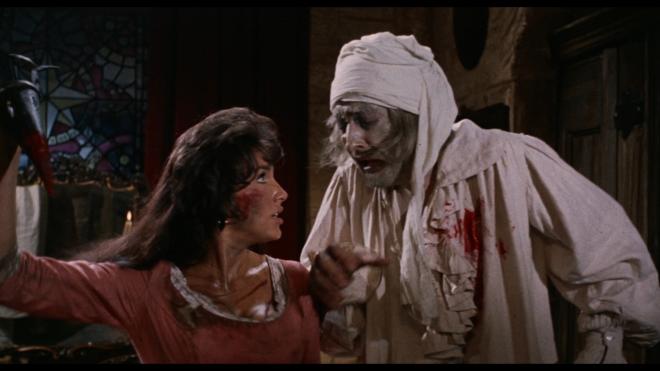 The Curse of the Werewolf arrives with a solid 1.85:1 aspect ratio in 1080p from a new 4K scan of the original interpositive. Purists should be delighted to know that this presentation lacks any of the image cropping previous versions displayed. The image transfer looks sharp and bright with primaries popping nicely. Film grain is intact and adds a deep texture to the film’s presentation. Fine detail in facial features and costuming is astounding. Makeup effects are clear and highlighted by Reed’s transformation into the beast. Black levels are solid throughout the feature. Some minuscule dirt and specs are visible but never detract from the presentation. There is a substantial uptick in quality across the board rendering previous home video iterations dull, drab, and lifeless. The Curse of the Werewolf has never looked better on home video! 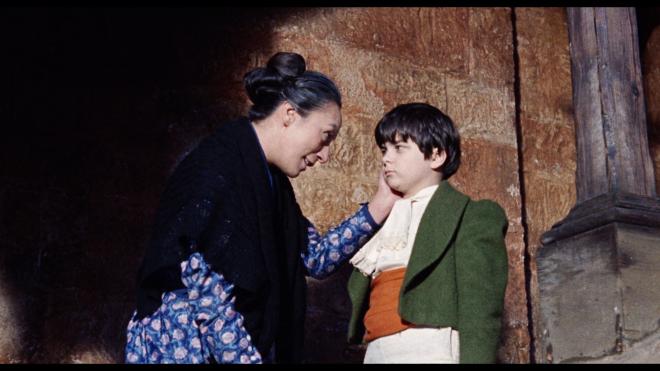 The DTS-HD MA Mono track presented on The Curse of the Werewolf is dialogue heavy while confidently supported with scoring elements and sound effects that rarely create an imbalance. Exchanges are clear without hiss or distortion. Scoring is robust when emphasized which helps this character-driven creature feature leap into action. For comparison the audio track here is nearly identical to the 2016 Hammer Horror Collection release. 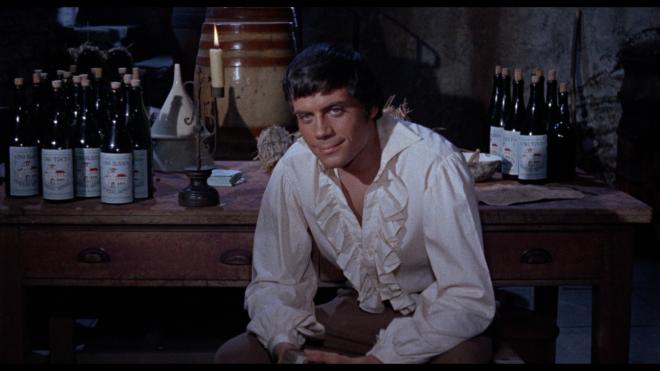 As expected Scream Factory doesn’t disappoint with the bonus features. With multiple featurettes and commentaries, there is so much to sink your teeth into. I recommend starting with The Making of The Curse of the Werewolf documentary before moving on to the Yvonne Romain commentary. 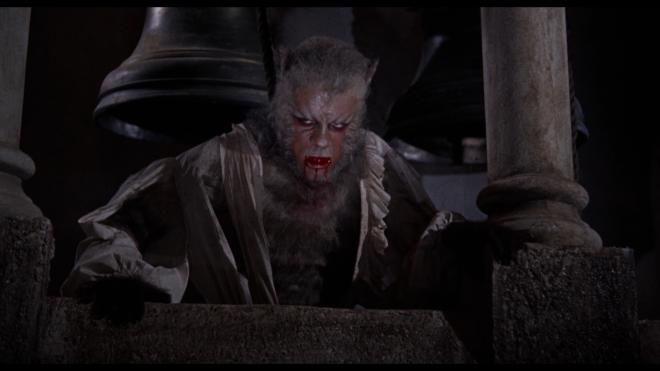 The Curse of the Werewolf is a hidden gem in the Hammer film canon that employs a character-driven focus before unveiling the beast. With plenty of gorgeous costumes and sets to admire the film doesn’t look like a cheap creature feature. Infamous for its many censored cuts and run-ins with the BBC The Curse of the Werewolf is thankfully presented here fully uncut. Those with previous home video versions should toss them out and grab this amazing release. With an impressive A/V presentation and plenty of bonus features to chew on this release comes Highly Recommended.