VFW is a splatterhouse throwback with practical gore effects and a cast of legendary action stars from horror director Joe Begos. Vietnam veteran Fred (Stephen Lang) and his combat buddies are stuck in the middle of a drug war when some stolen product shows up at their watering hole. RLJE brings VFW home with a 1080p HD transfer dripping in grainy goodness and a tenacious DTS-HD MA 5.1 audio mix that is punchy and loud. Bonus features included are a few EPK featurettes and two audio commentaries. Recommended. 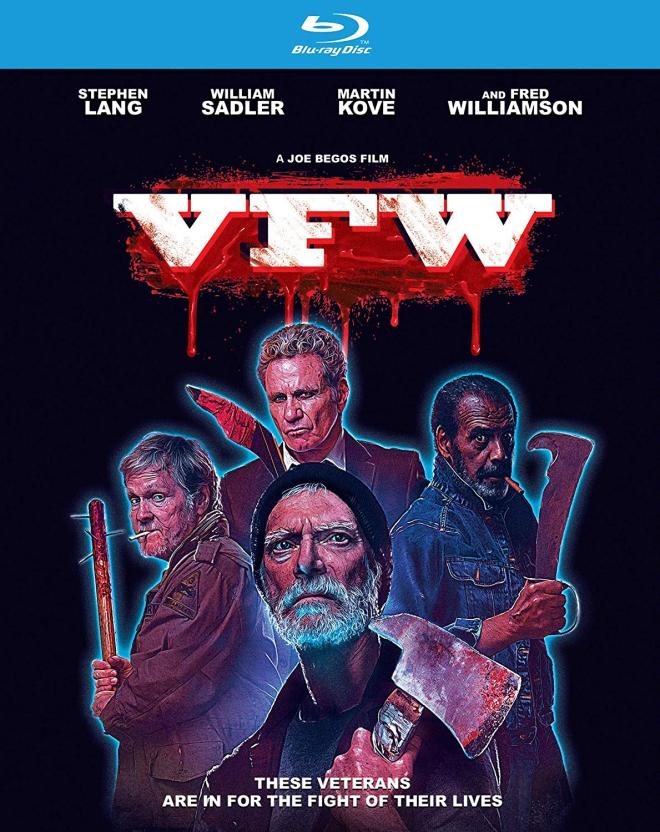 In the not too distant future, a drug called Hype is taking over America turning its users into crazed “hypers” and our streets into war zones. Law enforcement has given up on controlling the situation. Leather-clad dealer Boz (Travis Hammer) runs a makeshift club in an abandoned movie theatre filled with comatose hypers out for another hit. Reveling in his power over the masses Boz convinces a hyper named Lucy to commit suicide. To avenge her sister’s death Lizard grabs a safe full of Hype while a gang of hypers chases her down like zombies out for brains. She runs across the street into the grimy VFW.

The abandoned movie theater is the perfect setting for Boz’s hideout with flashing neon lights and complete darkness hiding nearly everything. Some killer effects work here from exploding heads to the flesh wounds on our soldiers. Nothing cheesy, nothing Z-grade, and thankfully nothing CG. VFW really delivers on everything it promises and only falters just a few times in a cringe-inducing attempt at lurid sexual humor. It just doesn’t work even if you label it “locker room talk”. Thankfully Begos keeps the momentum screaming forward with more violent punks and gallons of blood coating the walls of the dilapidated VFW.

The camaraderie among the men is the strongest part of the film outside of the ultra-violence. Their confident yet breezy dynamic shouldn’t surprise anyone. After Fred punches Lou for threatening Lizard he nurses his wounds in the bathroom and instantly forgets everything once he glances are the old photos hanging on the wall. There are a few touching moments between Lizard and Fred that keeps the film grounded and reminds us how great Lang can be on screen. When Lizard asks about ‘Nam we find deep emotional connections hidden in the middle of this neon punk horror film. Stephen Lang is dynamite here as he nails the slow guttural draw of an old-timer. His engagement with the material is well beyond the “I’m too old for this shit” attitude I was expecting. Thankfully VFW avoids an “old-timers vs. millennials” tone that I was certain would permeate every joke.

Where VFW succeeds is in making a true to form horror throwback without the “cool” factor that most small budget films incorporate to please audiences expecting a mixtape of Tarantino-esque references. In lesser hands, this would be another forgettable zombie flick but here Begos uses the hyper addict as zombie and transports us easily to anywhere in the heyday of VHS. Small town punks terrorizing locals is the meat and potatoes of 80’s actioners! I don’t wanna call this one a cult classic but VFW is an unrelenting visceral rampage drenched in a neon grindhouse aesthetic. *chef’s kiss*

VFW arrives on Blu-ray courtesy of RLJE Films housed in a standard Eco-style keepcase with an insert for the streaming service Shudder. The Region A Blu-ray Disc loads the logo for RLJE then trailers for Brawl in Cellblock 99, Bone Tomahawk, and Bushwick before landing on the Main Menu screen with typical navigation options. When you hear the thundering rock music you’ve made it.

VFW arrives on Blu-ray in a 1080p HD transfer with a 2.35:1 aspect ratio. Begos favored style over substance here mirroring the film after those great VHS horror films of the late 80s. Shot digitally but layered with a heap of grain the film looks dark and dingy. Detail is apparent but not clearly defined. Clarity outside of atmospherics and color doesn’t matter here. Skin tones are even and reproduced nicely within the scenes allowing for natural light. Detail in shadow is decent enough but the whole thing is nearly pitch black. Thankfully black levels hold solid throughout the feature with no blocking evident. Contrast is cranked at times making the whole proceeding dim until the darkness is cut with bright neon red lights. Confident primaries marooned in the pitch-black darkness gives VFW visual statements that reminded me of cyberpunk flicks like Hardware. I really enjoyed seeing the film with this intense color grading and aesthetic. Turn off all the lights before popping in the Blu-ray - trust me.

VFW is provided with only a single DTS HD-MA 5.1 audio track that is full and heavy. Gunshots knock the LFE with punchy resolve. Dialogue is clear and clean without a trace of hiss or distortion. Atmospherics play a huge role in the audio mix keeping tensions high and elevating the pulsating score. I would’ve appreciated a mono mix to accompany the 5.1 DTS to recreate a true VHS experience for VFW, but instead, we get two commentary tracks which is a nice trade-off. Turn up the volume to fully appreciate Steven Moore’s synth scoring which combines the tense urgency of a Sci-Fi thriller with a punk-infused intensity.

Offering up a trio of standard featurettes the bonus features seem lackluster until you get to the audio commentaries. These two tracks are the stand out features and well worth your time if you enjoyed the film.

VFW is a scrappy splatterhouse throwback that prioritizes practical effects and using its legendary cast for exploitation thrills. Begos doesn’t break the mold with this siege thriller which lowers the stakes a bit sadly. However, once the lights go out this gritty thriller showcases a gory rampage that would make John Carpenter clutch his pearls.

RLJE gives VFW a proper sendoff on Blu-ray with a grainy video transfer sure to please horror fans, a loud and punchy DTS audio track, and enough bonus features to please fans of the film. There is no gray area with VFW. From either the trailer or the artwork you’ll know instantly if this is the midnight movie for you. For splatterhouse horror fans this comes Recommended.