Trey Edward Shults' Waves starring Kelvin Harrison Jr., Lucas Hedges, and Sterling K. Brown delivers impressive performances, intricately beautiful cinematography to a richly emotional story. The issue working against the film is the recent glut of overly-melodramatic television shows that renders some of the plot turns into tried cliches with few surprises. Ultimately it's a very good film, but it's either holding itself from diving deep into one story or being held back by familiarity. Lionsgate issues a top-notch Blu-ray release with a pristine A/V presentation. It's well worth checking out for the impressive performances. Recommended.

Tyler (Kelvin Harrison Jr.) has everything going for him. He's a college-bound star athlete on the high school wrestling team. He's got a beautiful girlfriend Alexis (Alexa Demie) and he's upright and doing right in the eyes of his domineering father Ronald (Sterling K. Brown). When an injury takes Tyler off the team, his life spirals out and the critical choices he makes to deal with his situations will have ramifications for his entire family. 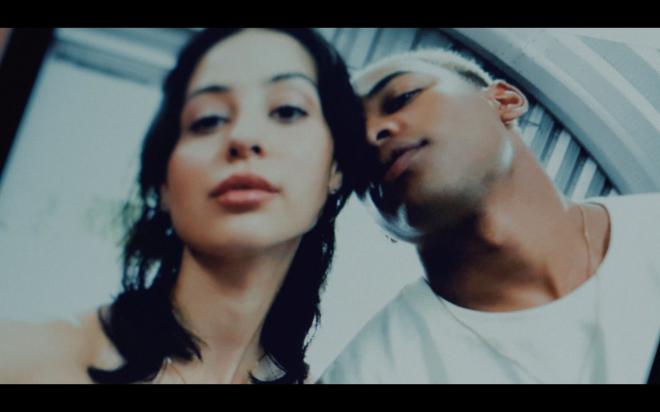 The best thing about Waves is its underlying message about redemption and reconciliation. There are few circumstances in life where differences can't be set aside long enough that two people (or multiple people for that matter) can't come together, find common ground and at the very least create a civil existence together. You don't have to be close friends but it's better than feeding hate. It's an applaudable theme and beautifully resonates throughout Trey Edward Shults' script, characters, and the amazing performances found throughout the film. It's a deeply emotional journey for these characters and this flick should resonate with a lot of people.

For me personally, I was pulled back because a lot of the plot turns felt like a melodramatic version of the improv game "and then." Tyler gets injured and can't wrestle "and then" his girlfriend gets pregnant "and then…" I don't mean to read flippant or dismissive of the story, it's often is one of those facts of life when bad things happen they tend to stack up. However, there are just so many "and then…" turns to this story that they start to pull back against the incredible work on screen. Waves at least moves towards the positive message of how one stands up and pushes forward that counts. If forgiveness is what it takes to survive then that's what you've got to find a way to do.

While I appreciate the direction this story aims for, it's pretty familiar territory. Really and truly I feel like if a show like This Is Us didn't exist, this movie would be a premier awards contender. As much as I love Sterling K. Brown as an actor and his performance here, I just couldn't get the handful of episodes of that show I saw and out of my head as I watched Waves. It could be a "guilt by association" deal bogging down my feelings about this film, but at the same time, I just can't shake the overly melodramatic structure. How much can go wrong for these folks in the span of two hours of filmmaking?

By comparison, If Beale Street Could Talk was one of my absolute favorite films of 2018. Similarly, it's a story marred by tragedy and loss, with a hopeful message - but it didn't stack so much "and then…" on top of the central story. If Waves had been a little more narrowly focused, trimmed some extraneous characters and events by about 20-minutes worth, this would be a fine-tuned drama that dealt its share of punches but lifted you back up at the same time. I wanted Waves to be another film of that caliber that I could put on my shelf. As it is - Waves is very good. There is a lot to admire here. And again, this cast is a beast all of them in peak form delivering true-to-life feeling characters - it was just too much of a good thing. Check it out for your self. It's one film where I may not as loved it as much as I'd hoped, but I encourage everyone to see it.

Waves washes on to Blu-ray in a single disc Blu-ray + Digital set from Lionsgate. Pressed onto a BD-50 disc, the disc is housed in an eco-friendly case with identical slipcover artwork. The disc loads to trailers for other A24 and Lionsgate releases before arriving at an animated main menu with traditional navigation options.

Shot digitally and finished on a 2K DI, this is an often stunning looking film with rich clear details, bold vibrant colors, and deep black levels. I was especially impressed with the thematic usage of varying aspect ratios to heighten the drama of specific moments. It was a seamless effect that really added an extra layer of intimacy to sever key sequences. Things are honestly so clear I was a little surprised to find out that this transfer was sourced only from a 2K master - it's a terrific looking presentation giving facial features, costumes, sets, some of the scenic scenery some real moments to sparkle. Colors are also bright giving primaries plenty of pop - blue is an especially dominant color. Skin tones are also healthy throughout. Black levels are nice and deep with strong shadow separation to give the image that desirable three-dimensional quality. Free of any compression anomalies, this really is a beautiful presentation. I'd have loved to see what HDR could do for some of the colors but regardless fans of the film should be very pleased with this transfer.

Waves arrives with a solid DTS-HD MA 5.1 mix - apparently it went out theatrically with Dolby Atmos, so I don't quite understand the downgrade, but this 5.1 mix holds its own. While a relatively quiet and contemplative affair, Waves does manage to make great use of the surround soundscape allowing for some impressive pinpoint element placing. Front/Center channels are dedicated to handling the basics of dialog and most of the primary sound effects. Party sequences, school gym, the family home all offer scenes with a range of volume levels with unique spacial dynamics. There are moments where the mix sounds tight and claustrophobic while other moments like when Tyler and his father talk in the home with their large ceilings gives this sense of immense space between them physically and metaphorically. I would love to have heard the original Atmos track prepared for this film, but such as it is, this 5.1 track is no slouch.

Waves may be imperfect. It's sprawling epic storyline probably could have been trimmed and focused for a tighter narrative - but the film earns high praise for incredible performances, a visually arresting presentation, sharp character writing, and a deep heartfelt theme about the power of love and forgiveness. I may not have loved it as much as I'd hoped I would, but Waves is one I highly encourage everyone to give a chance. You may not love it - but if you do you'll want to look at it again. Lionsgate delivers a technically terrific Blu-ray with a splendid A/V presentation and some worthwhile bonus features. Recommended.

Sale Price 13.2
List Price 21.99
Buy Now
3rd Party 5.5
In Stock.
See what people are saying about this story or others
See Comments in Forum
Previous Next
Pre-Orders
Tomorrow's latest releases