Greta Gerwig adds some spunk and youthful flair to the many-times told tale in the latest - yet not greatest - retelling of Louisa May Alcott's Little Women. Lively direction, beautiful cinematography, and excellent performances from the cast are slightly undercut by a fractured non-linear structure that pulls the dramatic punches that otherwise hit so hard in the novel and in previous adaptations. Sony delivers a first-rate Blu-ray sporting a gorgeous image transfer, a solid audio mix, and a smattering of decent extras. This may not be the best version of this story out there, but it's entertaining and I'm sure it will find an adoring audience for generations. Recommended.

Jo March (Saoirse Ronan) has dreams and visions of being a strong woman in a man's world as a respected writer. Living in New York City, she sells tall tales of adventure uncredited as to not offend the family her stories help support. Jo was always a standout from her sisters - Meg (Emma Watson) longed for societal advancement and marriage. Beth (Eliza Scanlen) loves her music but her quiet demeanor holds her back. The youngest Amy (Florence Pugh) longs to be an artist and live abroad - no matter how she gets there. All the while their mother Marmee (Laura Dern) tries to keep the family together through joy and hardship. Apart they merely survive but together they thrive as a family. 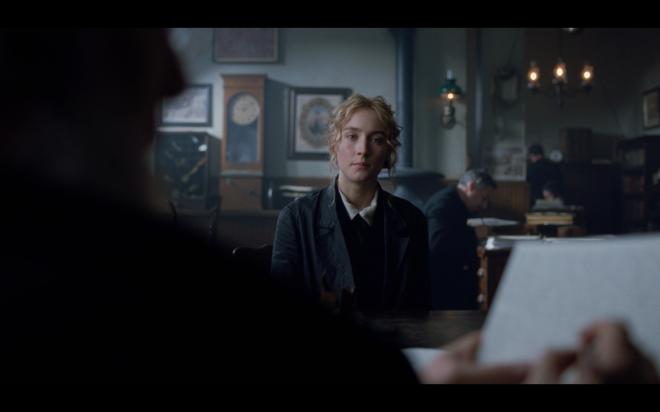 If you look up "Little Women" on IMDB you get the variable phonebook of adaptations. Louisa May Alcott's classic story is a timeless one. Every new adaptation brings something to the mix for a new generation willing to watch - if they haven't read the story already. Growing up my mother loved the 1933 version with Katherine Hepburn as Jo. The 1949 version with June Allyson is alright saved mostly by a young Elizabeth Taylor as Amy. By the time I was 12 in 1994, another film version headlined by Winona Ryder was making the rounds garnering Oscar nominations and solid box office success.

Little Women for the 2019 crowd is a solid effort from screenwriter/director Greta Gerwig and a suitable followup to her fantastic Lady Bird. With so many film and television series adaptations, you have to wonder what more could be brought to this story. To that point, Gerwig brings a youthful vigor to the screen allowing this story of sisters and their tumultuous relationships to come to life. As a smorgasbord of today's finest actresses and actors delighting the screen, they give it their all and come away winning the day as a cast. Saoirse Ronan as Jo is an impressive standout and holds her own against all others that came before.

Where I pull back in my praise for this new Little Women is with the fractured editing structure. It's just all over the place with the narrative. I understand the intention but I don't really gel with the result. It opens towards the middle/end of the story with Jo frantically writing and trying to sell a story and segues back in time "Seven Years Earlier" to an early time in her life with her sisters living a semi-impoverished life. That setup was fine - but then the jumping around the story continues as later events are intended to draw significant meaning from earlier events. I get why this was done, but it's unnecessary and for me it made the movie feel like a CliffsNotes adaptation. Every major significant event from the burning of Jo's manuscript to the death of an important character is foreshadowed to the point that these events lack the emotional impact if you'd watched any of the other previous adaptations or, you know, actually read the book.

This isn't to say that Little Women isn't completely without merit. As I said Gerwig brings a youthful energy to the film allowing these sisters to feel like true young women unhindered. While I gripe about the scattershot structure, each moment recreated from the novel is done incredibly well. Timothée Chalamet, Meryl Streep, and Chris Cooper all get these small moments to shine alongside the main cast in these scenes. It's just how these specific parts of the book are paired together with another part of the story that throws off the emotional rhythm of what could easily be considered one of the best pieces of 19th century American literature.

Little Women arrives on Blu-ray thanks to Sony Pictures in a two-disc Blu-ray + DVD + Digital HD set. The discs are housed in a standard sturdy 2-disc case with identical cardboard slipcover artwork. The disc loads to trailers for other upcoming Sony releases before arriving at a static-image main menu with traditional navigation options.

For such a visually beautiful looking image, it's a damned shame that this 1.85:1 transfer wasn't given a 4K UHD Blu-ray release. Shot on 35mm film and finished at a 4K digital intermediate - this movie begs for a UHD release. Looking at the tech specs on IMDB it was even given a Dolby Vision finish! So it goes… At any rate, this 1080p release is drop-dead gorgeous. Details are rich and vivid allowing you to appreciate the intricate work that went into recreating 19th century Concord and later New York City. Every scene is soaked in visual splendor. With a natural grain presence, the image has a nicely film-like appearance throughout. Colors are bold and give primaries plenty of pop while evening darker scenes enjoy the nice warm glow of orange/yellow firelight. Black levels are spot on with deep inky blacks. One note that's a tad off - but far from being a deal-breaker - there are a few shots that look like late pickup reshoots where it almost appears as if the actors appear in front of a green-screened oddly out of focus backgrounds. There aren't many of these moments but they pop up here and there throwing off the visual mojo of the movie a bit.

Little Women arrives with a strong DTS-HD MA 5.1 audio mix. Theatrically it was offered with an Atmos audio mix and I would have loved to hear that on this disc. For an often conversational and dramatic film, there's a terrific surround presence. When the March sisters are playing around performing their plays or running at the beach - or the bustling streets of 19th century New York - there is an amazing amount of front, side, rear activity. Even during the quietest moments, this film maintains a surround presence that's well worth noting. The Alexander Desplat score is another terrific quality of the film that perfectly accents the events without overpowering the mix. Dialog is clean and clear and levels are spot on without any need for monitoring.

Where there are some decent bonus features here, what we get isn't that incredible. There's some nice behind the scenes stuff to digest, but it's all pre-packaged EPK filler that only scratches the surface.

Greta Gerwig's adaptation of Little Women is the latest and probably far from being the last cinematic scribbling of Alcott's timeless story. Even with the numerous adaptations already out there, each speaks to a new generation - and this one definitely is of its generation. Even at a runtime of over two-hours, this version feels like its in a hurry to get to important plot beats you may remember from the book rather than letting events percolate and build to a natural crescendo. Well acted, the cast is incredible, the staging of events is superb, it's the fractured editing in the timeline that keeps this one from being a grand piece of work.

Sony delivers one hell of a Blu-ray offering a first-rate video transfer with an equally impressive audio mix to match. Bonus features are interesting but far from being in-depth. Do give this one a try. I readily admit to being spoiled by reading the book and seeing several versions of this story brought to film already. You may well love it. Recommended.