1917 tells a simple story against a large canvas that's beautifully captured by Roger Deakins. The story may not be a new one, but how it's presented, the war in question and the incredible execution makes 1917 one of the finest entries in the War Film genre - and an incredible piece of filmmaking. Universal delivers a spectacular 1080p Blu-ray experience that offers one of the best 1080p visual experiences available with an intensely immersive Dolby Atmos mix. Bonus features are decent enough but a larger comprehensive package would've been welcome. All the same, if you haven't upgraded to 4K yet, 1917 on Blu-ray will test the mettle of your home theater setup. Highly Recommended.

Read our thoughts about the 4K Ultra HD Blu-ray of 1917 for a full review. 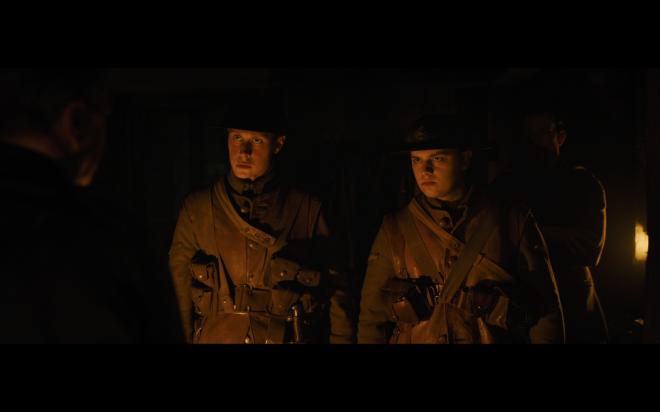 Universal Releases 1917 to Blu-ray in a two-disc Blu-ray + DVD + Digital set. The discs are housed in a standard two-disc case with identical cardboard slipcover artwork. The disc loads to trailers for other Universal releases before arriving at an animated main menu with standard navigation options.

1917 pushes 1080p Blu-ray to the limits with a picture-perfect 1080p 2.39:1 transfer. If 4K didn't exist, this would be the demo disc of the ages to show off your home theater rig. If you are 4K UHD ready - that is absolutely the release to own. If you're not on that wagon train yet - there should be nothing beyond some social distancing to keep you from buying this disc. 1917 is a stunning visual presentation. Details, colors, black levels - everything is picture-perfect for this format. The only thing holding it back is the fact that it's not in native 4K with HDR. That's it. Facial details are impressive with costuming and scenery getting equal attention. Black levels are spot on without any crush issues. Colors are vivid with amazing primary presence. Again, if you're rigged for it or plan to be - 4K is the way to go. If you have no intention to upgrade anytime soon, this 1080p Blu-ray succeeds at every step.

Both the 4K UHD Blu-ray and the 1080p SDR Blu-ray release enjoy an Atmos audio mix that is an auditory marvel. For a war film, it's not all guns and explosions - most of the film is actually very quiet as two men make their way through trenches, bunkers, across rivers - it's not about the action sound effect you're expecting to hear, it's about the subtleties you don't hear!

This mix offers up pin-point perfect vertical, side, and rear sound effect placement. The vertical channels give plenty of space through open fields but then come crushing in when our heroes enter an abandoned enemy bunker. Likewise, when soldiers leave the trenches and the bombs start falling around them the channel movement and impact provide this beautiful cacophony of imaging and LFE. That airplane sequence is a highlight moment.

For the standard marks of dialog clarity, scoring, and surround effects - everything is an A+ effort. The mix is perfection from start to finish. You never once lose a line of dialog against a background of Thomas Newman's exceptional score and warfare. Levels are spot on without any need to ever adjust things. I simply say turn up the volume and let the movie suck you in.

2019 saw a terrific number of amazing movies take theaters and streaming services by storm. Not all of them could stand on stage come award time and the case can be made that 1917 deserved a few more than it got. Visually stunning, this arresting war film is a simple story about the bonds of wartime friendship told by a master director in peak form with camera work by one of the best shooters in the business.

Universal Studios delivers an impressive 1080p Blu-ray release that is only upstaged by its 4K counterpart. If you haven't upgraded, this disc sports a tremendous video transfer with a fully immersive Atmos audio mix to match. Bonus features offer two great commentary tracks with some decent supplementary material. If you love war movies or just love great filmmaking, turn out the lights and roll 1917 - it's a Highly Recommended Blu-ray release.