Frequent Spike Lee cinematographer Ernest R. Dickerson works to replicate classic blaxploitation horror flicks of the 70s in the 2000s with Snoop Dogg in Bones. Largely ignored upon release, the film has grown a solid cult following thanks to home video and impressively enough holds up as a fun watch nearly 20 years after release. Scream Factory delivers Bones to Blu-ray with a nice A/V presentation along with some new and archival bonus features to round out the set. If you're a fan of the flick and ready to upgrade from the ancient DVD - Bones is certainly at the very least Worth A Look.

In 1979 Jimmy Bones (Snoop Dogg) was the man of his neighborhood. A respected numbers runner and gangster, the people loved him - so naturally the cops hatted him. Betrayed by a crooked cop and his lover Pearl (Pam Grier), Jimmy is murdered and entombed in his own brownstone. 22 years later, a group of teens - Patrick (Khalil Kain), Bill (Merwin Mondesir), their stepsister Tia (Katharine Isabelle), and their friend Maurice (Sean Amsing) buy the old brownstone on a steal of a deal from the bank intent to turn it into the hippest night club in town. After they unleash Jimmy's cursed sprit, Jimmy resurrects and enacts vengeance upon those that wronged him. 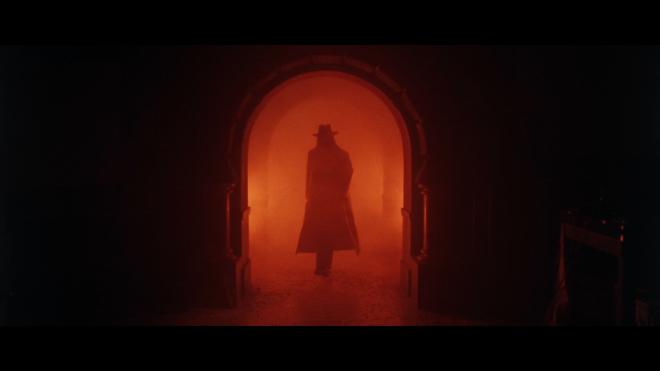 Bones was a favorite on campus when I was in college. It felt like every dorm room I went to, every house party I dropped by seemed to have this movie on in the background. Simply, it's a crowd-pleaser. It looks slick, edited well, and Snoop Dogg is always entertaining even if through half the movie his character is actually a demonic dog. It's the kind of movie you can glance at in a party, turn away for a conversation, glance back and still not have missed much. It's fun, but it's not an amazing piece of work.

While I fully appreciate that Ernest R. Dickerson and his talented cast and crew aimed to recreate the vibe of Blaxploitation horror movies of the 70s like Blacula - right down to casting Pam Grier - there is an imbalance in plot and tone that keep this show from working its true magic. First, for a 96-minute movie, it takes way too long to get going. I'm all for plot setup and characterization, but so much time is burned before the A Plot even begins that by the time Snoop's Jimmy fully resurrects there's so little time left to enjoy what he brings to the part. Second, the tone of the movie is all over the map. The humor in Blacula and Scream! Blacula, Scream! was very tongue in cheek. It knew when to play for a laugh but also focus on delivering a quality scare or two. Bones tries to be too funny to the point that when it's scary you're not sure if it's supposed to be a joke or not. Horror/Comedy is a tough genre tightrope to balance and few movies succeed at it. Bones gets a couple of moments right adding some nice touches of gothic classic horror but then its sense of humor kicks in and sputters the material.

While I have some gripes here and there, I do enjoy this movie. It's the right kind of disposable entertainment that you can't get too worked up over it not 100% succeeding at its goals. If anything I like it better 20 years after watching it. When I was in school I worked the campus convenience store and we had a decent VHS rental shelf and this was a popular rental. If it wasn't rented usually we'd run it on the store TV for some background noise. On a late Friday night, it was fun how many people would casually pack into the little store and hang out to watch this movie while they shopped. It's good for casual background noise, and it's fun for a watch if you need something uncomplicated that just aims to be entertaining.

Bones arrives on Blu-ray thanks to Scream Factory in a single disc Blu-ray set. Pressed on a Region A locked BD-50 disc, the disc is housed in a standard sturdy case. The disc loads to an animated main menu with traditional navigation options.

Without any info about the vintage of the master, I'd have to wager that this 2.35:1 1080p transfer was sourced from a more recent broadcast HD master. It doesn't look like it has undergone much restoration, some slight speckling and a few hairline scratches appear from time to time, but that's the worst of the damage. Overall I'm quite pleased with the film's appearance here. Details are strong allowing for facial features, the dated late 90s early 2000s clothing to come through. I was most impressed with the production design for Jimmy's abandoned brownstone. Film grain is intact and natural-looking giving the image a nice film-like quality. Colors already skewed toward the drab cold blue side of the spectrum, the 70s flashbacks focus on the timely yellow/browns - overall colors look great with nice primary pop. Black levels are pretty good, they don't quite always go to the true inky black level one hopes for, but there's still a nice three-dimensional presence to the image.

As has been the situation with several recent Scream Factory releases, Bones arrives with a pair of audio mixes to choose from - a DTS-HD MA 5.1 track as well as a DTS-HD MA 2.0 mix. Both are great so you're ready to roll either which way you go. I personally like the 5.1 mix better for the extra spacing of elements and improved imaging. When our hapless teens start to explore the brownstone, there's some great pinpoint placement of creaky steps and floorboards and voice echos that gets lost in the 2.0 mix. The 2.0 mix is still very good, but it also feels like the soundscape is much more crapped and forced into the stereo channels giving it a notably flatter feel. Both tracks offer clean and clear dialog, great scoring from Elia Cmiral, and solid levels without the need for extra volume riding while you watch.

This release of Bones may not be billed as a "Collector's Edition" from Scream Factory, but that didn't stop them from putting in the effort to produce new bonus features as well as grabbing up all of the archival materials from the old DVD.

Bones may not be the solo character Star Trek spinoff movie sci-fi fans hoped fore - nor is it the pitch-perfect return to classic blaxploitation horror/comedy films of the 70s, but it's fun. Its heart is in the right place even if the final product leaves a little to be desired. Snoop Dogg manages to bring a little menace as the titular monster from beyond the grave, but the film's imbalance between horror and comedy is what keeps it from succeeding. Scream Factory makes sure this video store cult classic gets a solid Blu-ray release with a strong video transfer, two solid audio mixes, and some genuine quality bonus features to match. If you're a fan, it's worth adding to the collection, if you're new to the show and want to see what Snoop can do as a horror baddie - Bones is Worth A Look